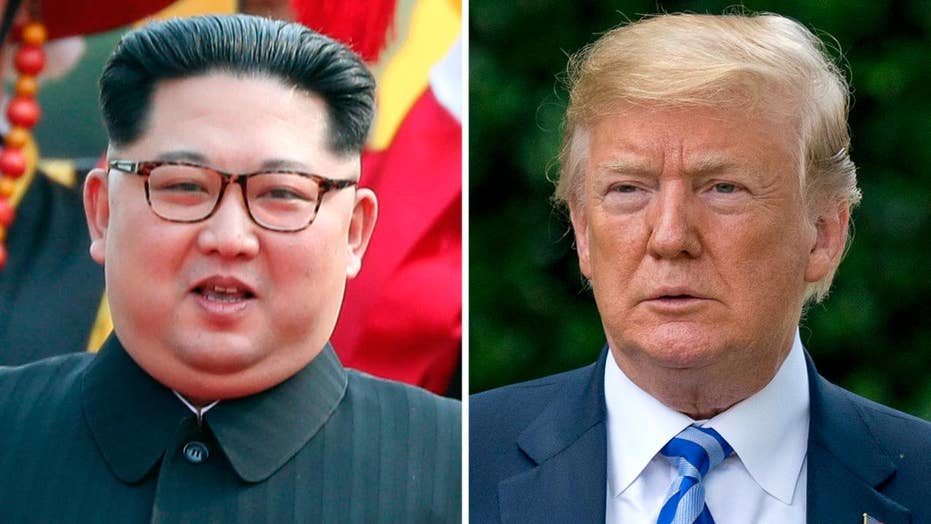 One week out from possible North Korea summit

White House is tamping down expectations ahead of the summit with Kim Jong Un. Kevin Corke reports from the White House.

President Trump is scheduled to meet with North Korean leader Kim Jong Un June 12 in Singapore. The Wall Street Journal reports that planning is underway for a possible summit between the U.S. president and Russian President Vladimir Putin. To prepare for these meetings, President Trump can learn lessons from decades of high-profile summits between U.S. presidents and Kremlin leaders.

Beginning with the wartime 1943 Tehran conference and continuing into the 21st century, participants in these summits have had successes, but have also learned lessons the hard way.

Lesson One: Personal charm and persuasive skills have limits. In an effort to build trust with Soviet leader Josef Stalin, President Franklin Delano Roosevelt stayed at the Soviet embassy at the Tehran conference and flattered Stalin at the 1945 Yalta conference. But at both sessions Stalin achieved most of his goals. At the 1985 Geneva summit, however, Soviet leader Mikhail Gorbachev and President Ronald Reagan began developing ties that may have aided later progress. Charm can also work in the other direction. At the 2001 Slovenia summit, President George W. Bush gushed he “was able to get a sense” of Putin’s “soul,” and found him “trustworthy.”

Lesson Two: Summits tend to ratify, not alter, the realities of power. Yalta conferees called for a “more broadly based” government in Poland, but British Prime Minister Winston Churchill and Roosevelt were later frustrated in their hopes for free elections, because the country was under Soviet occupation. At the 1987 Washington summit, Gorbachev and Reagan signed the Intermediate-range Nuclear Forces (INF) Treaty. This treaty eliminated land-based missiles in the 500 to 5,500-km range. Beset by internal crises, Gorbachev acceded to the U.S. “double-zero” position after opposing it and linking conclusion of an INF ban to the end of a missile defense program that President Reagan refused to abandon.

Lesson Three: Risks increase when relations worsen. On May 1, 1960, a high-altitude U-2 aircraft was lost over Russia, and Washington claimed a weather plane had gone astray. After Soviet leader Nikita Khrushchev displayed the pilot, President Dwight Eisenhower conceded that the aircraft was spying. On May 16 at a four-power Paris summit Khrushchev threw a tantrum and stormed out, causing the meeting to collapse and embarrassing Eisenhower.

Lesson Four: With Moscow, accords are easier to reach on arms control than on regional disputes. Even as the INF Treaty was signed at the 1987 Washington summit, the two sides remained at loggerheads over the Soviet war in Afghanistan and support for the Sandinista regime in Nicaragua. The Kremlin has favored arms control deals that reinforce perceptions of parity with the U.S.

Historic accomplishments such as the INF and START Treaties were the product of detailed expert negotiations, plus leaders determined to reduce nuclear risks and improve relations. Whether these are priorities of Kim Jong Un and Putin is uncertain. Both are known for nuclear bluster.

Lesson Five: Inadequate preparation heightens the risk of summit failure.  President John F. Kennedy’s advisers worried that he was ill-prepared for the 1961 Vienna summit with Soviet leader Nikita Khrushchev. President Kennedy’s stature had been weakened by the failure six weeks earlier of the Bay of Pigs invasion of Cuba. After the summit, Kennedy conceded that Khrushchev “savaged me.” Two months later construction began on the Berlin Wall. For the 1987 Washington summit, Reagan was better prepared, and the meeting yielded not only a major treaty, but also engendered optimism. Both Gorbachev and Reagan gained in stature.

Lesson Six: U.S leaders should bring Congress along. At the 1974 Moscow summit, Soviet leader Leonid Brezhnev and President Richard Nixon signed the Threshold Test Ban Treaty, limiting the size of underground nuclear tests. It had glaring verification deficiencies, so the Senate rebuffed it. At the 1979 Vienna summit, Brezhnev and President Jimmy Carter signed the SALT II Treaty, which sought to slow the growth of long-range nuclear arms but was controversial. Again, the Senate balked. Reagan learned from these failures. In 1985 he invited the Senate and House to create arms control observer groups, which often visited nuclear negotiations in Geneva. Aided by their work, the Senate approved INF and START, a treaty that halved long-range nuclear forces.

Several of these factors might affect President Trump’s summit with Kim Jong Un. As with Khrushchev at the 1960 summit, the potential for surprise may be high. The short lead time and near absence of prior substantive negotiations by experts may hamper summit preparations. North Korea has made a determined effort to acquire nuclear weapons and is not eager to give them up. If any deal with North Korea requires U.S. military concessions, the Senate will likely insist on tight verification, as with other nuclear arms treaties.

Tense U.S.-Russian relations might dim prospects for a Trump-Putin summit. Russia is waging war in eastern Ukraine, has interfered in U.S. elections and is propping up Syria’s brutal Bashar Assad regime. If there is to be progress at the summit, an agreement to extend the New START Treaty may be more likely than one to end the fighting in Ukraine.

Historic accomplishments such as the INF and START Treaties were the product of detailed expert negotiations, along with leaders determined to reduce nuclear risks and improve relations between their countries. Whether these are priorities of Kim Jong Un and Putin is uncertain. Both are known for nuclear bluster.

Michael Haltzel is senior fellow at Johns Hopkins University’s Center for Transatlantic Relations, and was Democratic staff director for Europe on the Senate Foreign Relations Committee and adviser to then-Sen. Joseph R. Biden.

William Courtney is an adjunct senior fellow at the nonpartisan, nonprofit RAND Corporation and was U.S. ambassador to Kazakhstan, Georgia, and a U.S.-Soviet commission to implement the Threshold Test Ban Treaty.