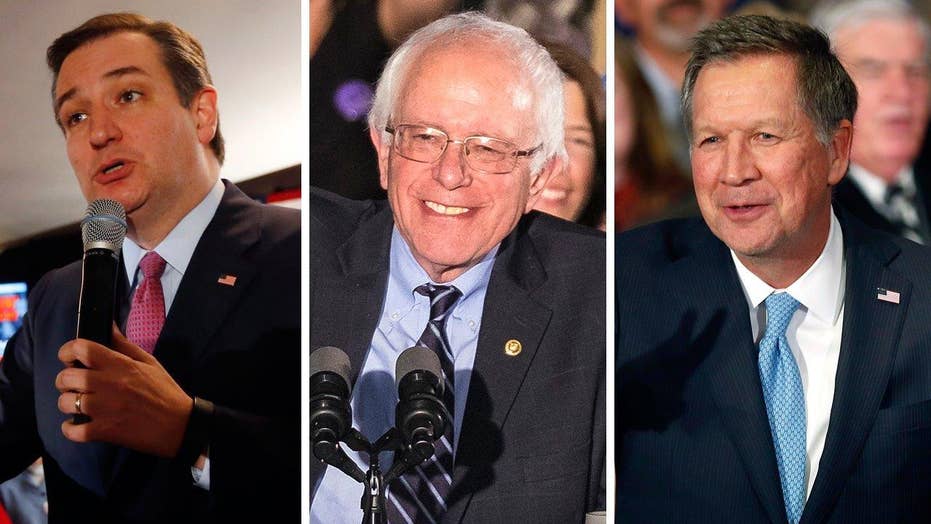 What was the biggest surprises, disappointments from NH?

Add this to the list of election-year proverbs to dismiss: John Sununu’s snarky missive that “Iowa picks corn and New Hampshire picks presidents”.

The last presidential hopeful to make good on Sununu’s words: his old boss, George H.W. Bush. That was all the way back in 1988 – three years before Peyton Manning first took the field . . . for his high-school team.

In theory, the first two stops on the campaign trail embody two traits: clarity and attrition. In that regard, Iowa’s GOP caucuses didn’t disappoint. Three Republican candidates left the race not long after the votes were counted; the contest moving forward suggested a three-man war of attrition between Donald Trump, Ted Cruz and Marco Rubio.

And then New Hampshire went to the polls.

Three “cards” coming out of the primary? Try 52-card pickup, with the race as muddled as it was pre-Iowa. And as many as five Republicans still with a pulse: Trump, Cruz and Rubio, plus John Kasich and Jeb Bush.

Consider what the Granite State results meant to the Still-Alive Five:

Trump. The Donald held only 11 town hall meetings and spent but 23 days in the state – it would have been 24 if he hadn’t been snowed out last week due to his insistence upon sleeping in his Manhattan bed. You won’t find a more economical victory this early in the process.

Before Iowa, Trump’s message was words to the effect that “I’m ahead because I’m great and I’m great because I’m ahead”. Trump can now credibly repeat that mantra (as he surely will). Soon, South Carolina will break the tie as to whether Trump is more of a concept or a reality.

There is this one cloud on the horizon for Trump: as sweeping as his victory was (he scored particularly well with voters concerned about the economy and terrorism), Trump finished only one point above the final pre-primary poll. He emerges from New Hampshire with momentum, but it’s not an unstoppable train.

Credit the man for his persistence; if you’re cynical, give him demerits for blatant single-state pandering.

With the second-place finish, Kasich moves on – albeit with two problems: not a lot of money in the bank (perhaps as much $2.5 million in cash on hand, which won’t go far in a race that’ll soon span time zones); and finding another state where, minus the luxury of enough time to personally sell the message of high-road governance, he can do serious damage.

Rubio. There he was cruising along, picking up ground in the daily tracking polls, until Chris Christie bloodied him badly in the final pre-primary debate (as in Iowa, debates seem to have played a crucial role). So much for Rubio’s “3 (Iowa) 2 (New Hampshire) 1 (South Carolina)” strategy.

Like Tony Soprano killing the mob informant during his tour of Maine colleges with his daughter, this one act of New Jersey violence imported into New England had serious ramifications. Rubio’s jarring underperformance means it’s time to regroup, rethink strategy and maybe revisit all the rehearsed lines.

If it’s any consolation to Rubio, Christie finished a disappointing sixth – too poor of a showing to qualify for the next GOP debate. He announced he's heading back to New Jersey. We’ll see if he vows to soldier on.

Cruz. The one Republican in the field playing with house money, in that the Texas senator’s fortunes have always been predicated on strong performance in Iowa and the South, not New Hampshire.

You’ll be hearing a lot about “Upcounty” in the coming days. It’s the more socially conservative part of noncoastal South Carolina that will determine Cruz’s success in the Palmetto State (it went big for Newt Gingrich in 2012). As luck would have it, it’s also the locale of the next GOP debate (Saturday, at Greenville’s inaptly named Peace Center).

Bush. What does $36 million in primary expenses and a claim of reaching the largest number of voters get you? For Jeb Bush, a problematic argument that his success in not finishing last among the three governors and not getting buried by Rubio earns him the right to fight on in the South.

The Bush strategy – well, the new strategy after the massive war chest failed to clear the field of moderate alternatives? It’s not much different than his father and brother’s presidential runs: South Carolina as a Bush “firewall”.

For Jeb, that means South Carolina as the state where he turns the corner – brushing aside Kasich, outperforming Rubio and arriving at the March 1 Super Tuesday cluster of states as a more believable establishment alternative to Cruz and Trump.

Or so another multimillion-dollar sell with attempt.

With Republicans not voting again until a week from Saturday, it’s time for a little perspective.

In 1996, New Hampshire’s Republican presidential primary likewise produced a jumble. The evening’s winner was the conservative commentator Patrick J. Buchanan – same middle initial as Trump, same angry populist message (“Do not wait for orders from headquarters,” Buchanan roared in his victory speech, “mount up everybody and ride to the sound of the guns.”)

Twenty years ago, the GOP field was clearly divided, with an air of inevitability. Buchanan, like Trump, tapped into nativist and protectionist sentiments. Dole, like a few GOP candidates in this current field, struggled with how to fashion himself as au courant despite being a well-worn political figure. Alexander, a former Tennessee governor, was the candidate of the New South. Forbes, a flat-tax champion, was the economic candidate.

Yet unlike 1996, when Dole had the money and machinery to outlast the rest of the field, no current Republican has an inside track on the party’s nomination.

Trump has yet to write himself a big check suggesting he’ll blitz the airwaves. Cruz has yet to prove he can win on a field not tilted in his favor. Kasich may or may not prove to be a one-state wonder. Rubio and Bush carry lingering doubts.

The good news now that New Hampshire’s in the books: they all get to linger a little longer.