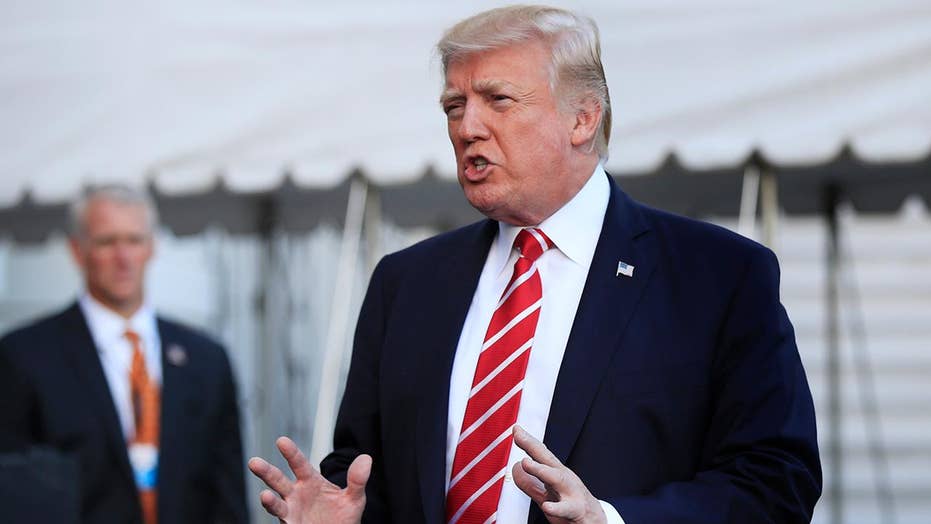 It’s almost the beginning of 2018 and the media still can’t accept that Donald Trump is president. This week it didn’t matter whether it was Trump’s golf game, his tax cut or even his “whiteness.” The media were dropping new complaints faster than the ball will fall in Times Square New Year’s Eve.

New York Times columnist Amanda Hess was clearly triggered by a year of Trump. She described him holding up his fist during his inauguration as “a menacing taunt to his predecessor: Look what my whiteness allows me to get away with.”

CNN took a swing at Trump, but ended up in the bushes behind a truck. CNN had boasted it had gotten video of Trump golfing, but its staffers were irked when a truck blocked their camera angle. Reporter Dan Merica was accurate in one thing he said. “It may seem trivial,” he told viewers before arguing the necessity of the golf video. Look for CNN to engage a professional golf correspondent. Perhaps the fictional comedy character Dorf can help.

The media were dropping new complaints faster than the ball will fall in Times Square New Year’s Eve.

There was lots more in the ongoing war between the press and the president. New York Times columnist Roger Cohen called Trump a “Mussolini’s understudy.”

Fellow Times columnist Paul Krugman, who was so ridiculously wrong about his prediction for a Trump “global recession,” celebrated the “pink pussy hats” of the Women’s March. He proclaimed: “If American democracy survives this terrible episode, I vote that we make pink pussy hats the symbol of our delivery from evil.”

Politico’s Jack Shafer wrote a telling analysis of how “Trump has argued the news media to a stalemate.”

“The press has accepted the role of the opposition party if not the designation,” Shafer wrote. “In press conferences and news stories, the national media give Trump the brand of guff we once heard coming from the firebrand wing of the Democratic Party. This is not to say reporters are in the tank for the Democrats – only that Trump’s confrontational style drives them to dig in and return fire.”

That’s more than a bit generous. The media did everything they could to defeat Trump during the campaign and after. It just hasn’t worked and that’s made them even more openly anti-Trump.

2. Trump Played The Media Again: Liberals really don’t realize when they are being played.  They rise to the bait like the Koi fish CNN falsely depicted as getting overfed by Trump.

This time Trump mocked global warming as much of the nation was frozen over due to the polar vortex. He tweeted: “In the East, it could be the COLDEST New Year’s Eve on record. Perhaps we could use a little bit of that good old Global Warming that our Country, but not other countries, was going to pay TRILLIONS OF DOLLARS to protect against. Bundle up!”

The New York Times couldn’t help itself, writing of Trump that “he appeared unaware of the distinction between weather and climate.” Then the “news” outlet scolded, saying how climate scientists don’t expect warming to mean the end of winter altogether. This is the same paper that ran an opinion piece headlined “The End of Snow?” in February 2014.

CNN also freaked out, writing: “Trump's tweet further places the President's climate policy out of step with the vast majority of scientists, who believe global warming is damaging for the United States and the world.”

Journalists in frozen parts of the nation are sure to keep warm with all the hot takes they write about this over the four-day weekend.

3. You Didn’t Think Journalism Was Honest, Did You? Poor Josh Meyer of Politico. He made an honest mistake. He thought journalists were allowed to report negative news about both sides of the political aisle.

His story, “The secret backstory of how Obama let Hezbollah off the hook,” gutted one of the Obama administration’s signature accomplishments – the deal with Iran designed to stop the nation from developing nuclear weapons.

Naturally, journalists flocked to cover this story, right? Well, no, not really.

Wemple argued that “Obama administration law enforcement policy toward Hezbollah is a tough topic for a media critic to adjudicate.” Then he did exactly that, saying “the piece lacks a smoking gun.”

Tablet rose to Meyer’s defense and described what happened after his story as “Josh Meyer Gets an Echo Chamber Beat-Down.” It described what it called “perhaps the most shocking thing about his piece is that it took so long for a single journalist in Washington … to report and write it.”

Journalists have done everything they can to suppress the story. With the combo of Christmas and New Year’s breaks, expect little to no coverage following it up. In media bias, the crimes of omission are always worse than those of commission.

4. Sexual Misconduct Claims Continue: The tide of sexual misconduct allegations didn’t recede even with the holiday. Most of what happened this past week was reaction from media outlets. However, BuzzFeed fired White House Correspondent Adrian Carrasquillo for “sending an inappropriate message to a colleague.”

Things continued to get worse for Vice. “An investigation by The New York Times has found four settlements involving allegations of sexual harassment or defamation against Vice employees, including its current president.” The settlements equaled at least $184,000, the paper reported.

In response to its own sexual misconduct issues, NBC has released new guidelines that force employees to “rat out” co-workers for inappropriate behavior, according to The New York Post. Under the new rules “employees have been ordered to report any inappropriate relationships in the workplace – and if they fail to do so, they could be fired.”

Apparently, not everyone is happy with such rules. MSNBC co-host Mika Brzezinksi actually criticized the accusers of former show contributor Mark Halperin. She claimed he was "more than willing to meet with his accusers and apologize with them face-to-face."

It was unusually tone deaf for the lefty MSNBCer, but journalism protects its own. Or tries to. Brzezinksi ended up having to apologize after serious pushback from 10 of Halperin’s accusers.

“In the case of Mark, my goal today was to start a conversation about hearing from the men whenever we can, but I realize that it is not my place. It isn’t my call to make, and for that I am truly sorry,” Brzezinksi said.

5. Vanity UnFair: Most media outlets don’t criticize Hillary Clinton. At least not for long. Vanity Fair released a video mocking the liberal icon in humorous tones, with one urging her to take up knitting.

Writer Maya Kosoff offended the liberal Powers That Be with her suggestion: “Take up a new hobby in the new year. Volunteer work, knitting, improv comedy – literally anything that will keep you from running again.”

Naturally, the publication apologized. Because that happens so often when liberals mock the right.

“It was an attempt at humor and we regret that it missed the mark,” the publication whined.

President Trump poked fun at the apology, writing that “Vanity Fair, which looks like it is on its last legs is bending over backwards in apologizing” in a tweet.