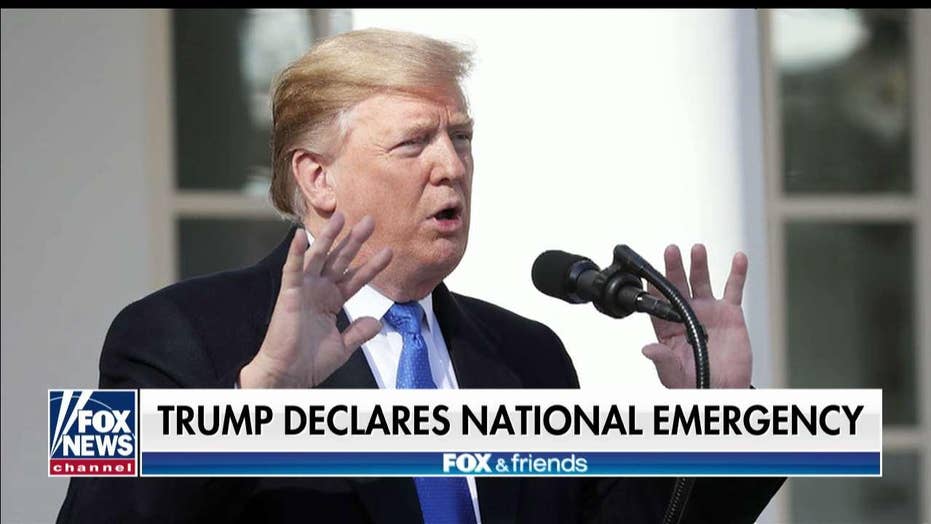 Homan on Nat'l Emergency: Dems Had Trump 'in a Corner' Over Border Security Decision

Democrats are calling President Trump every name in the book and threatening multiple lawsuits to overturn his Friday declaration of a national emergency on our southern border.

The president is using the declaration to enable him to shift funds already in the federal budget to border security. The shifting of money from one set of priorities to the more urgent priority of border security will allow the president to spend over $8.1 billion to build barriers along part of our border with Mexico and fund other border security measures.

But listen to the angry denunciations of the president by outraged Democrats. You’d think he’s throwing out the Constitution, banishing every member of Congress to the wilderness, and proclaiming himself an all-powerful dictator for life – an American version of North Korean leader Kim Jong Un.

It should go without saying that President Trump is doing no such thing. In truth, the president is using his constitutional authority in the same way other presidents have, in order to find money to deal with an emergency.

And make no mistake, the crisis on the U.S.-Mexico border is a real emergency – not a figment of Trump’s imagination.

Think of what the president is doing in terms of your family budget. You have money set aside to buy a new car. Then a member of your family gets seriously ill and requires emergency medical treatment that costs you several thousand dollars not covered by your health insurance. What do you do? You postpone buying the new car and use the money for emergency medical care.

It’s a shame that it has come to this.

The legislation to fund government operations – averting another partial government shutdown – was passed by Congress and signed into law by the president Friday.

But congressional Democrats – who voted in the past to spend billions of dollars on border fencing – dug in their heels and decided they could no longer support the same sort of border barriers they once approved.

This forced the president to reluctantly declare a national emergency to go around the Democratic obstructionists. This is a lousy way to resolve a genuine national crisis, but it was born of congressional apathy, negligence and incompetence.

There is no doubt that whoever is president of the United States has the constitutional authority to declare a national emergency. President Trump’s proclamation declaring an emergency meets every requirement of the National Emergencies Act of 1976.

You’d have to be detached from reality to deny that we now face a crisis at the border. Among the tens of thousands of people entering our country illegally are dangerous criminals, drug smugglers, sex traffickers and human smugglers.

In the last fiscal year alone, fentanyl smuggling has increased 73 percent. The drug is now the leading cause of overdose deaths in the U.S.

The Department of Homeland Security (DHS) estimates that criminal organizations make $2.5 billion annually from human smuggling. In the 2018 fiscal year, the Border Patrol stopped 17,000 illegal immigrants with criminal records and apprehended 6,000 members of MS-13 and other violent gangs.

As the president mentioned in his State of the Union address, DHS has arrested more than a quarter-million illegal immigrants in the last two years. They were accused or convicted of over 100,000 assaults, 30,000 sex crimes and 4,000 murders.

The president has correctly pointed out that migrant caravans – something not seen before – are overwhelming our border security system. Last year, 60,000 unaccompanied children and 161,000 families arrived at the border.

You’d have to be detached from reality to deny that we now face a crisis at the border. Among the tens of thousands of people entering our country illegally are dangerous criminals, drug smugglers, sex traffickers and human smugglers.

President Trump’s emergency proclamation sums up the situation this way: the southern border has become the site of “large-scale unlawful migration” and is “a major entry point for criminals, gang members, and illicit narcotics.”

That’s not a political statement. It’s a statement of fact.

The president asked Congress for $5.7 billion for a border wall. Democrats refused. The government funding bill he signed into law Friday provides almost $1.4 billion for 55 miles of border barriers in the Rio Grande Valley in Texas.

It’s obvious that 55 miles of additional fencing/barriers/walls (whatever you want to call it) is nowhere near enough to patch the huge holes that exist all along the southern border. So following the requirements of the National Emergencies Act, the president has issued a declaration of a national emergency.

President Trump has identified more than $8.1 billion in funds already appropriated that he can use to supplement the amount of border security funding that Congress just agreed to. This is on top of the nearly $1.4 billion approved by Congress.

The president will also use the Treasury Department’s Forfeiture Fund, which contains $601 million. Additionally, he will transfer $2.5 billion from the Defense Department to the “Support for Counterdrug Activities,” as authorized by 10 U.S.C. § 284.

Given the flurry of lawsuits filed over almost everything President Trump has done over the last two years, it’s a certainty that many lawsuits will be filed to block his national emergency declaration.

In fact, just hours after the president declared a national emergency the group Public Citizen – representing an environmental group and Texas landowners – filed a lawsuit in U.S. District Court in Washington that seeks to block the emergency declaration. And California Gov. Gavin Newsom announced California will file its own lawsuit.

But if and when the challenge to President Trump’s emergency declaration gets to the U.S. Supreme Court, the smart money says the president will win.

For one thing, the National Emergencies Act gives the president broad discretion to determine what constitutes a national emergency. So does his inherent constitutional authority as the chief executive and the commander in chief. I doubt the Supreme Court will want to substitute its judgment for that of the president on this question.

Moreover, if a lawsuit is filed by members of Congress, as some have threatened, the Supreme Court is apt to look upon it with disfavor. Why? Because lawmakers don’t need to go to court on the matter.

Congress wrote into the National Emergencies Act a specific procedure to remedy the situation. Section 202 of the law provides that lawmakers can terminate an emergency simply by passing a concurrent resolution.

As the White House points out, President Obama and President George W. Bush used the military to assist the Border Patrol along the Mexican-U.S. border. Both of those presidents also used the same military construction appropriation and the same statute being cited by President Trump – 10 U.S.C. § 2808 – on 18 different occasions to redirect funding for projects between 2001 and 2014.

Here’s the bottom line: Frustrated with Congress’s continuing failure to perform its sacred duty to protect the American people, President Trump felt he had no choice but to take action Friday.

But that action, while strictly constitutional, is nothing to celebrate. It carries a significant downside since it exposes the critical need for border security to the whims of activist federal judges.

Congress needs to get its act together. This is no way to secure the border, much less run a country.