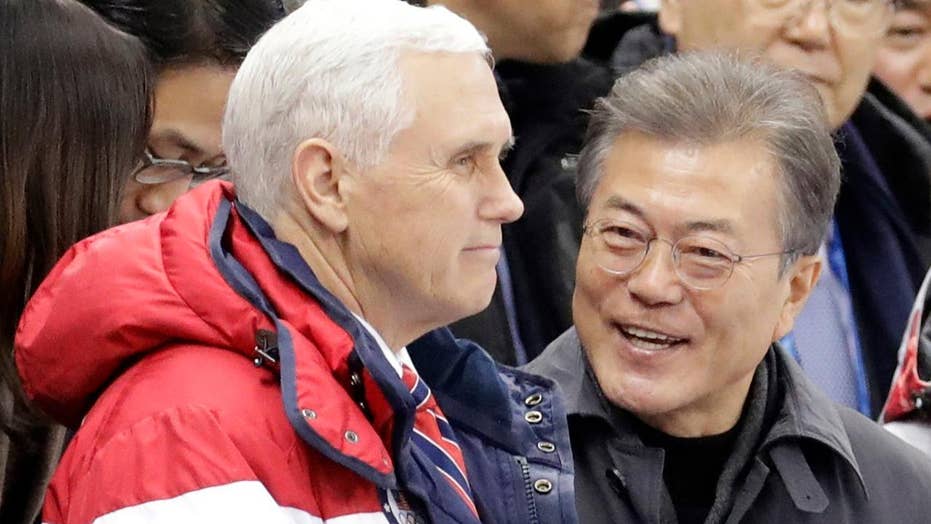 VP Pence: US is ready to talk with North Korea

The vice president was assured by the South Korean president that pressure would be maintained on the rogue regime.

North Korea’s Kim family are the greatest abusers of human rights on the planet today. Such a family—more akin to the murderous Corleones in the Godfather trilogy than leaders of a nation-state—deserves to be tried in The Hague for their sins. But instead of a one-way trip to answer for their countless crimes, the killer Kims were instead paid what can only be described as the ultimate honor: VIP seats in a luxury box at the 2018 Winter Games, right there with our own Vice President Mike Pence, thanks to a peace overture pushed by the two Koreas.

And from there it gets worse. North Korea used this opportunity to mount what could easily be described as the greatest attempted rebranding of a country in modern times. Forgotten was talk of Pyongyang’s missile and nuclear tests of last year or the 200,000 or so people trapped in prison camps. Oh no, instead we were told that Kim’s visiting sister was the “Ivanka Trump” of North Korea.

But make no mistake, the Trump administration was ready for the Kim regime’s propaganda push.

On the way back from the games aboard Air Force Two, seasoned foreign affairs reporter Josh Rogin sat down with Vice President Pence to discover that the Trump administration has a plan to turn the tables on the roguest of rogue regime on planet Earth.

If Pyongyang is unwilling or unable to talk about its nuclear program there is simply no point in talking.

In what is a slight change in tack on the surface, the vice president unveiled what is being dubbed a strategy of “maximum pressure and engagement at the same time” when it comes to North Korea. At its core, Washington would continue to ratchet up pressure on the hermit kingdom and, according to the report in the Washington Post “will not stop imposing steep and escalating costs on the Kim Jong Un regime until it takes clear steps toward denuclearization.” However, the Trump administration would be willing to “sit down and talk with the regime while that pressure campaign is ongoing.” It could also very well announce an increase in sanctions right after the games.

This is where things get interesting. Rogin reports that South Korea’s President Moon assured Pence that Pyongyang would get no “economic or diplomatic benefits for just talking.” This is important as North Korea has a history of trying to extract money for taking part in summits – for instance in 2000, when the North received $500 million just for showing up to the first Inter-Korean summit, and  asked for (but did not receive) $10 billion more for another potential summit. This time, Moon apparently promised Pence there would only be concessions to the North “for taking concrete steps toward denuclearization.”

In fact, denuclearization is the key in any talks with North Korea. If Pyongyang is unwilling or unable to talk about its nuclear program there is simply no point in talking. And the article by Rogin seems to point to such an idea, in that “the initial move the United States wants is for North Korea to put denuclearization on the table and take steps toward it, though that is not a condition for preliminary talks.”

Logic suggests quite strongly that if Pyongyang won’t even go that far, to at least talk about their nuclear weapons program and its dismantling in any negotiation, then we have solid proof the North is simply biding for time. We would then know this is just another ruse to gain time to build evermore advanced nuclear weapons or missiles that can hit the U.S. homeland, or to extract sanctions or perhaps the cancellation of joint U.S.-South Korea military exercises now set for the end of April.

The Trump administration has laid out a nicely crafted trap for Kim to fall into – either he is willing to talk about the dismantling of his nuclear program or not and this is all a sham. And considering the fact that North Korea has been quite clear their nuclear weapons are not to be bargained away—they are enshrined in their sham of a constitution—the stage is likely set for less talking and more tensions fairly soon.

Enjoy the Olympics for now, America. But know that once the flame is doused and everyone goes home, the lights will go out on the Kim’s charm offensive as well.