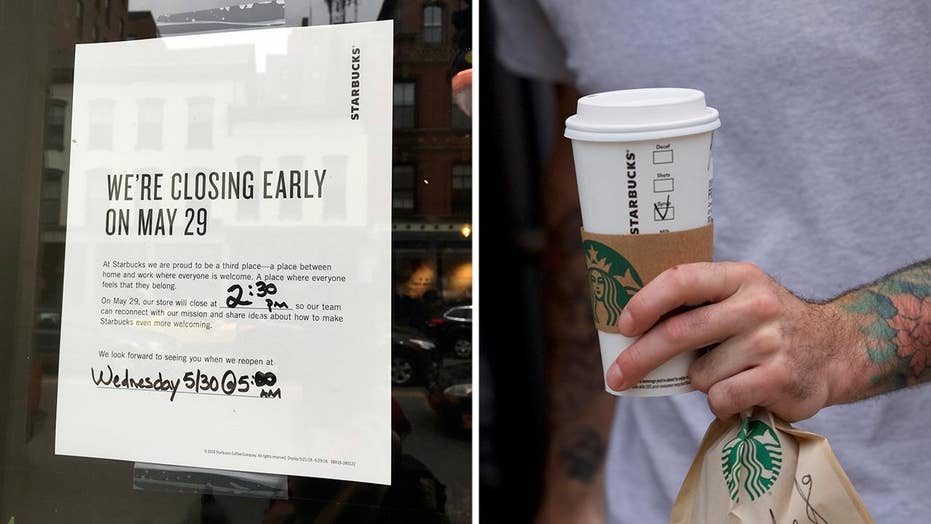 8,000 Starbucks across the nation will receive racial-bias training. Bryan Llenas has the story.

If you are in the mood for a high-priced cup of coffee that tastes burnt – you'll have to go somewhere other than Starbucks during a three-hour period Tuesday afternoon.

Last month, two black men were arrested in Philadelphia after they refused to leave one of the coffee chain’s stores and one was denied use of the restroom. The men, who said they were waiting for a friend, were sitting quietly but had not purchased so much as a latte. They were taking up space meant for paying customers.

While police arrested the two men for trespassing, they were later released without charges and both the police and Starbucks apologized to them.

For decades Starbucks has been using its stores to promote social justice, but now it's come back to bite 'em in the coffee bean.

Starbucks had every right to ask those men to order a beverage or food or leave the shop. It’s a place of business, not a public park.

Nevertheless, the social justice warriors pounced – accusing the folks who wear the green aprons of racial profiling and discrimination.

Instead of standing its ground, Starbucks threw their baristas under the roaster and offered a profuse apology.

“Regretfully, our practices and training led to a bad outcome – the basis for the call to the Philadelphia police department was wrong,” CEO Kevin Johnson wrote in a meandering mea culpa. “Our store manager never intended for these men to be arrested and this should never have escalated as it did.”

Starbucks vowed to treat every customers with “respect and dignity” – even if they don’t purchase an expensive cup of their bitter java.

Tuesday’s anti-bias training features appearances by company executives along with the rapper named Common. Baristas are being encouraged to “open up about implicit biases and stereotypes in encountering people of color, gender or other identities.”

Starbucks has no one to blame for this fiasco but itself.

For decades Starbucks has been using its stores to promote social justice, but now it's come back to bite 'em in the coffee bean.

Remember back in 2015 when Starbucks ordered baristas to strike up conversations about race relations with customers?

“So that’s one venti Veranda Blend Blonde Roast with extra cream. May I have your name, sir?”

“And Ted, based on your defensive posture, I’m sensing some privilege, too. We can help with that.”

From that day forward I began brewing Community Coffee. The beans are roasted by a family-owned company based in Louisiana. It’s a good cup of coffee, it costs less and best of all – no political agenda.

There's a lesson we can all learn from this Starbucks debacle. When a coffee house serves up a piping hot cup of politics – well – it's going to end up frothing everybody's latte.