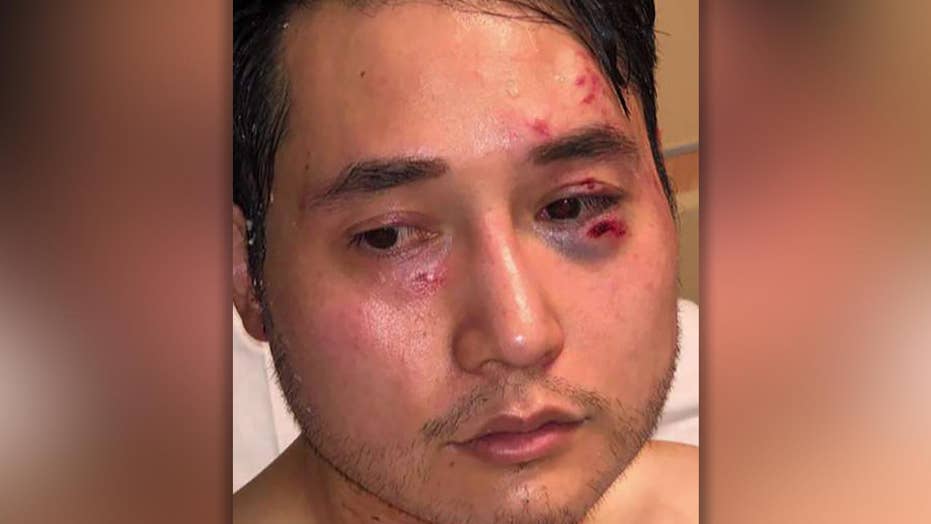 Antifa protesters attack conservative journalist sending him to the hospital

GOP strategist Jen Kerns and Democratic strategist Antjuan Seawright weigh in on whether or not Antifa should be considered a terrorist organization.

An elderly man was brutally beaten by Antifa thugs wielding baseball bats in downtown Portland, Ore., over the weekend. Another man, a Good Samaritan who came to his defense, was cracked in the skull with a crowbar.

Not too far away from that altercation journalist Andy Ngo was set upon by another gang of leftist savages. He was punched in the face and pummeled by violent kicks. Others in the crowd sprayed the defenseless journalist with milkshakes laced with quick-drying cement and caustic chemicals.

“It was complete anarchy and lawlessness,” Ngo told me during an interview on The Todd Starnes Radio Show.

You can watch videos of all the altercations here, but be warned – you’d best have a strong stomach.

I write about these kinds of attacks in my upcoming book, “Culture Jihad: How to Stop the Left From Killing a Nation.” Click here to pre-order.

Ngo, an editor and photojournalist for the online website Quillette, was attacked in front of the Oregon Justice Center – which houses the sheriff’s office and a police precinct.

And yet, Ngo said there were no law enforcement officers anywhere near the attack – leading many to speculate that police officers had been given an order to stand down and not stop the Antifa thugs.

Mayor Ted Wheeler’s office will not comment on the accusations, but Ngo’s attorney said there is no doubt in her mind that such an order was given.

“The mayor is a weak coward for what he did here,” Harmeet Dhillon said on my radio show, calling the attack on her client a “shocking civil rights violation.”

“The outcome here is a direct result of a command and control structure that tells the police to not do their job so that people can run wild in the streets of Portland,” she said. “Allowing these thugs to conspire to prevent a journalist from doing his job and to injure him and to try to scare others is a civil rights violation.”

Sen. Ted Cruz, R-Texas, is blaming Mayor Wheeler for giving Antifa a free pass to terrorize the citizens of Portland.

“To federal law enforcement: investigate & bring legal action against a Mayor who has, for political reasons, ordered his police officers to let citizens be attacked by domestic terrorists,” Cruz tweeted.

Last October a 74-year-old motorist was assaulted after he was caught up in an Antifa mob action. During that protest, police officers were ordered to stand down.

“I was appalled by what I saw in the video, but I support the Portland Police Bureau’s decision not to intervene,” the mayor said in remarks reported by the Washington Times.

“I want to be very clear I do not want the @Portland Police to be engaged in or sucked into a conflict,” the mayor tweeted last June.

So it’s not that much of a stretch to wonder if the mayor gave police officers orders to stand down during last weekend’s protest marches.

Dhillon called for the federal government to intervene, comparing the crisis in Portland to the Ku Klux Klan’s reign of terror in the Deep South.

“This gang is the new version of the KKK using masks to terrorize citizens going about their business,” she said. “

The outrage among conservatives has been overwhelming. Columnist Michelle Malkin launched a GoFundMe campaign to help cover the medical costs of Ngo. Even Ambassador Richard Grenell denounced the savage attacks.

"This was a pre-meditated attack on someone because intolerant radicals don’t like that Andy happens to be gay, Asian and conservative," the ambassador wrote on Twitter. "They targeted him publicly before their protest. Mayor @tedwheeler knew this was coming. The people of Oregon must speak up today."

Right now, law-abiding Oregonians should be warned that there is anarchy in the streets of Portland. It is not safe for you or your families to visit that city or do business in that city.

The truth is if you find yourself surrounded by Antifa thugs, the mayor will just turn a blind eye. And if you don’t believe me, just ask journalist Andy Ngo.