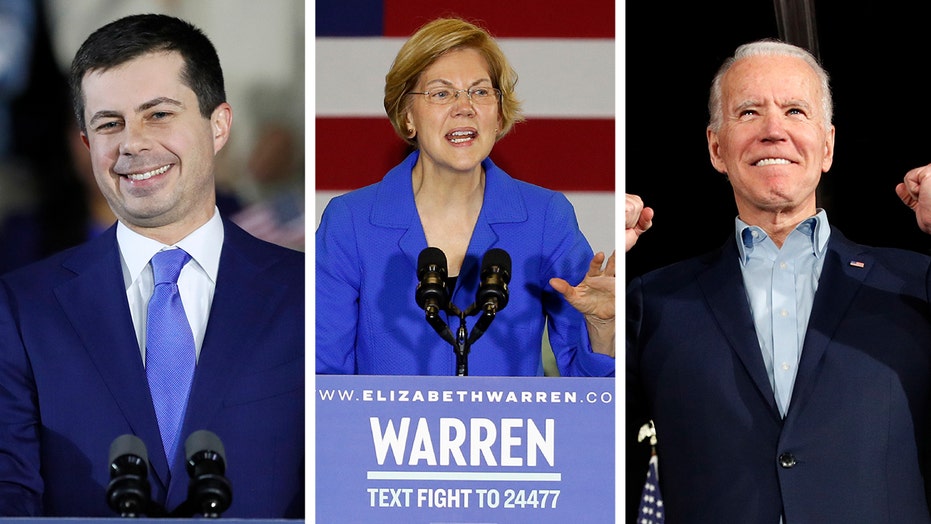 Can any Democratic presidential candidate claim momentum from Iowa caucuses?

Reaction from Jim McLaughlin, pollster for the Trump campaign.

If one of the Democratic candidates wants to surge ahead of a crowded field, he or she should cut a deal and name his or her running mate now. The Iowa Caucuses will eventually have a winner, but by the time the results are announced, delegates will be divided up, nobody will have benefited from the usual momentum bounce, and the voters will have already moved on to New Hampshire. All the more reason to spice things up. Since there does not appear to be a break out star among the top tier - Bernie Sanders, Pete Buttigieg, Elizabeth Warren and Joe Biden - they all go into New Hampshire able to make this move from the same position of relative strength.

A major presidential primary candidate has never announced his or her running mate this early in the process, but such a departure from precedent would be exactly the shock to the predictable electoral system that could help shorten the primary and position him or her well for the general election.

Abraham Lincoln briefly thought that he would be the first presidential candidate to have his running-mate named prior to his own re-nomination for president—but it was a case of a confusing telegram. During a visit to the War Department amidst the 1864 National Union Party convention, Lincoln received a confusing telegram informing him that Andrew Johnson had been nominated as his vice president. He was shocked.

“What! Do they nominate a vice president before they do a President?” Lincoln snapped at the telegraph operator. “Is that not putting the cart before the horse?” Lincoln had missed the early morning telegram informing him of his own nomination for president.

The vice-presidential candidate has never been named in advance by the successful presidential candidate. Some presidential candidates have named a running-mate as a defensive move, a last-ditch effort to salvage a sinking campaign. In 1976, Ronald Reagan named Senator Richard Schweiker as an appeal to centrists in his failed presidential bid. In 2016, Ted Cruz named Carly Fiorina as his running mate well after Super Tuesday, but by then he had already lost momentum.

The position of vice president was an afterthought by the founders, who initially included it in the Constitution as an electoral mechanism to be granted to the presidential runner-up. This practice changed with the 12th Amendment in 1804, which required electors to cast separate ballots for the president and vice president.

Until the 1960s, political parties nominated a candidate for president and then made a decision about the running-mate. It was seen as taboo at the time for the presidential candidate to interfere with the party’s decision. Selecting the vice presidential candidate was seen as the party’s prerogative, and parties often used this privilege to balance the ticket, unite the party, or ensure that a particular faction or state had its patronage pipeline protected.

The 1960 presidential election moved the decision-making to the candidate and turned the selection process into a bit of a campaign gimmick, but it did not change the practice of waiting for the nomination before considering the VP selection. John F. Kennedy - despite opposition from his brother Robert - asked Lyndon Johnson to join him on the ticket because they desperately needed Texas and segregationist Democrats to win the election. Richard Nixon chose Henry Cabot Lodge as his running mate to spice up the foreign policy credentials of the ticket (Lodge was United Nations ambassador and would later serve as U.S. ambassador to Vietnam).

Today’s political climate is the ideal time to discard this tradition and for a candidate to select the vice presidential candidate before the primary season concludes. First, the vice presidency will matter more in this race than any election in recent memory, although not for reasons of winning a state or bringing along a particular category of voter. Today, America is in the longest period in history without the president dying in office. At 73 years old, President Trump is the oldest incumbent in the history of the Republic, and the two leading contenders on the Democratic side are Joe Biden, 77, and Bernie Sanders, 78. Although it hasn’t happened recently, my book "Accidental Presidents" reminds us that presidents dying in the office does sometimes occur - eight presidents have died in office and another 19 nearly met the same fate.

Typically candidates have focused on choosing a running-mate whom they regard as “safe”— meaning they won’t overshadow, embarrass or otherwise surprise the ticket (Sarah Palin was an exception to this). Given the age range of their most likely candidates, the Democrats are likely to nominate someone who could be a one-term president, so history would suggest that pick a vice presidential nominee with some star power and a long career ahead of them.

Any Democratic candidate that emerges from the early primaries still has a long road ahead to the nomination. Many candidates still have strong support and well-funded campaigns, so the primary season could extend all the way to the convention without a clear leader. If a candidate selected a vice president before then, he or she could disrupt the field and leverage the additional momentum and attention to solidify their support.

This is not a typical election cycle. Candidates, therefore, should consider an atypical approach to winning. Naming a vice presidential running mate this early in the primary season is a risky move, perhaps, but it would at least demonstrate novel political technique and a willingness to take bold steps to secure the party's nomination. This may be the kind of excitement the Democratic voters are looking for.