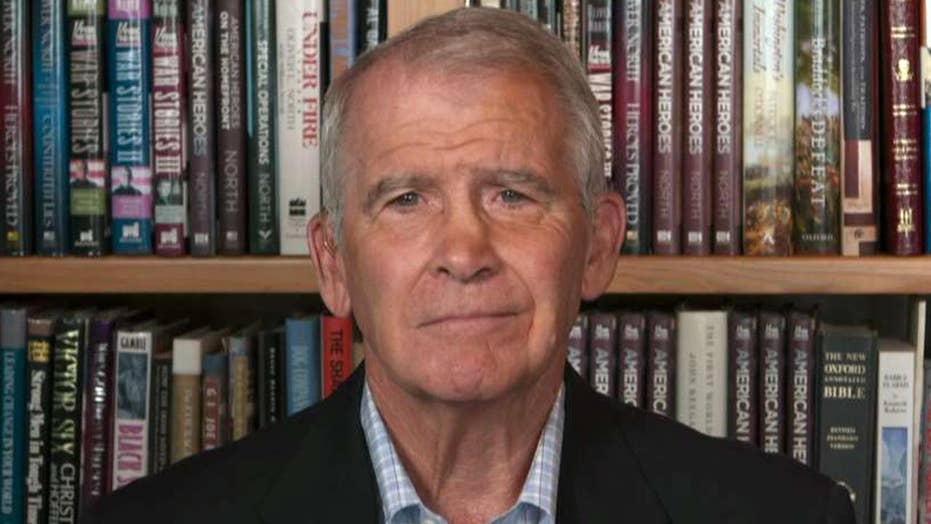 Oliver North: China the only leverage US has over NKorea

This week, U.S. intelligence agencies made it known – through a leak – that Kim Jung Un’s brutal regime in North Korea now has the means of delivering nuclear weapons on the U.S. homeland. For reasons that should be the subject of a congressional inquiry, this existential threat was apparently just discovered after years of collaboration between Iran and the Democratic Republic of North Korea [DPRK].

One has to wonder how our intelligence services failed to discern how one of the poorest countries on the planet, where grass is a vegetable, could afford to develop and build “miniature” nuclear warheads and ICBMs capable of hitting the U.S. Did the Obama Administration know about the nuke-ICBM collusion between Tehran and Pyongyang when Secretary Kerry was negotiating the “Iran Deal?”

Those are important questions. But right now, the most important issue is: What we should do about this clear and present danger?

Clearly, the “carrot & stick” policies pursued since the Clinton administration have failed miserably. Despite two and a half decades of international and unilateral sanctions, diplomatic overtures, offers of aid, and the Obama administration’s fatally flawed “strategic patience,” Kim Jung Un now has the capability of killing millions of our countrymen.

President Xi has to believe that unless he acts – quickly – the U.S. will take pre-emptive military action against the DPRK with catastrophic consequences for North Korea and the Peoples Republic of China.

In many respects, the threats posed by Pyongyang are more serious than what President Kennedy faced during the Cuban Missile Crisis in 1962. Kennedy could be fairly certain Nikita Khrushchev and the Soviet leaders weren’t going to start firing nuclear weapons at us – because they wanted to survive. That’s why Mutually Assured Destruction [MAD] worked. There is considerable doubt whether the leaders in Pyongyang [or Tehran] have the same survival instincts as the Russians.

On August 8, President Trump broke with his predecessors and warned the world, Pyongyang  “will be met with fire and fury like the world has never seen” unless Kim Jung Un desists from threatening the U.S.

A day later, Defense Secretary Jim Mattis issued a statement urging the DPRK to “cease any consideration of actions that would lead to the end of its regime and destruction of its people."

President Trump’s critics now claim his words are exacerbating the problem and Washington needs to back down, “wait for new UN Sanctions to work” and even, as Senator Dianne Feinstein urges, start another fruitless “face-to-face dialog” with Kim while he continues working with the ayatollahs to acquire more nukes & ICBMs.

That’s simply irrational. If the DPRK already has nuke weapons & means of delivering them on our homeland, the messages from the Commander-in-Chief and the SecDef are the only responsible course of action – as long as it is believed by the intended audience. And that audience isn’t in Pyongyang – it’s in Beijing.

President Trump needs to persuade President Xi and the politburo in Beijing that it’s in the best interests of the Chinese people to act now to stop Pyongyang’s nuke-ICBM program.

Xi has to believe that unless he acts – quickly – the U.S. will take pre-emptive military action against the DPRK with catastrophic consequences for North Korea and the Peoples Republic of China. Xi is certainly aware hostilities on the Korean peninsula will likely result in up to 20% of the DPRK population [25 million] fleeing on foot across Yalu & Tumen rivers & take to the sea like “boat people” from Vietnam in 1975.

President Trump now needs to back up his words with actions. Here are ten of them he can order tomorrow to convince President Xi that we’re deadly serious:

1. Press ROK President Moon to accept as many THAAD systems as we can deliver.

3. Return the U.S. Tactical Nuclear weapons to the ROK that we withdrew in December 1991.

5. Deploy Search & Rescue [SAR] assets to ROK and ask Xi if we can base some SAR assets to China to recover downed air-crews [It’s unlikely he will agree but it may wake up the politburo in Beijing].

7. Deploy a USN/USMC Marine Expeditionary Unit to an off-shore station in the region.

8. Deploy more ISR assets [satellites, etc.] to update target lists. That we’re doing so is sure to leak.

10. Urge Japanese Prime Minister Abe to visit Beijing with the mission of convincing PRC President Xi he will get the credit and be remembered in history as “The Leader Who Took Us Back From the Brink...”

All these actions [with the possible exception of #10] are necessary before we could initiate effective military operations against the DPRK. Taking these steps now may help convince President Xi and the PRC politburo that the U.S. is deadly serious – and may preclude the necessity of going to war.