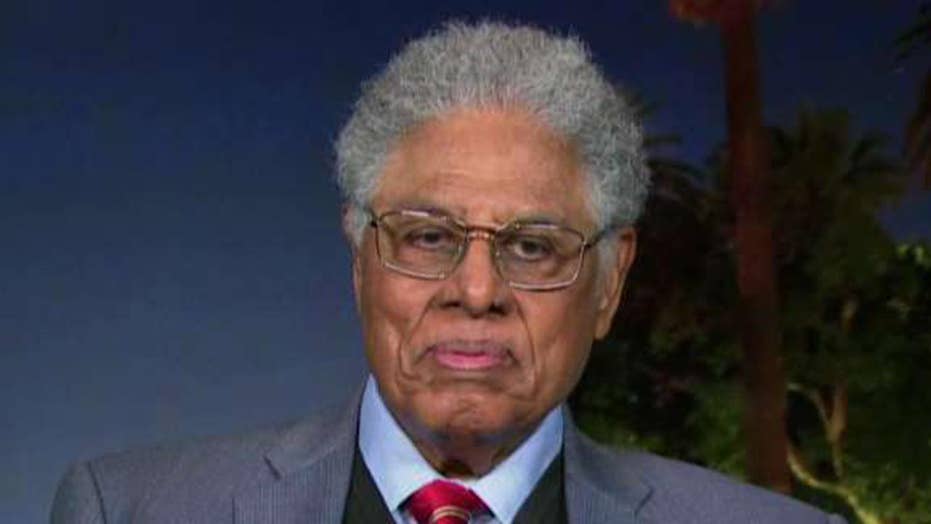 Sowell: Politicians using race as their ticket to whatever racket they're running

Hoover Institution senior fellow Thomas Sowell weighs in on Democrats' use of race to push their agenda.

“Despite how persuasive the words of John Rawls and other ‘social justice’ advocates may be in the world of words, demonstrated facts in the world of reality raise the crucial question as to whether the redistribution of income or wealth can actually be done, in any comprehensive and sustainable sense. Where, instead, there is simply a humanitarian desire to see the less fortunate have better prospects for a better life, the ‘social justice’ argument is both unnecessary and an impediment to joining forces toward that end with others who do not happen to share the implicit assumption of that particular social vision.

When there are major disparities in outcomes among men who are all in the top one percent in IQ, and among siblings raised under the same roof, as well as discriminated-against minorities being more economically successful than those discriminating against them – as happened in the Ottoman Empire, many Southeast Asian countries and much of Eastern Europe, for example – the insistence on believing that human biases are the primary cause of disparities in outcomes ignores a vast range of evidence to the contrary.

This is not to say that nothing can be done to offer more people more opportunities. Much has already been done, and much can and will be done. But how it is done can be either helpful or harmful, depending on how well we understand and deal with the world as it is, rather than according to some vision that might seem more attractive, for whatever reason.

Despite the inability to confiscate and redistribute human capital, nevertheless human capital is – ironically – one of the few things that can be spread to others without those with it having any less remaining for themselves. But one of the biggest obstacles to this happening is the ‘social justice’ vision, in which the fundamental problem of the less fortunate is not an absence of sufficient human capital, but the presence of other people’s malevolence. For some, abandoning that vision would mean abandoning a moral melodrama, starring themselves as crusaders against the forces of evil. How many are prepared to give up all that – with all its psychic, political and other rewards – is an open question.

…Certainly there have been many examples of times and places where money or other physical wealth has been confiscated by governments or looted by mobs.  But, physical wealth is a product of human capital – the knowledge, skills, talents and other qualities that exist inside the heads of people – where it cannot be confiscated.

Confiscating physical wealth for the purpose of redistribution is confiscating something that will be used up over time, and cannot be replaced without the human capital that created it. Nor is human capital itself easily created by third-party decision-makers. While it is possible to hire teachers and buy books, it is not possible to purchase a cultural past that will prepare and orient all people toward the acquisition of the skills, habits and attitudes that are decisive for human capital.”

Adapted excerpt from "Discrimination and Disparities" (Revised and Enlarged Edition) by Thomas Sowell. Copyright @ 2019. Available from Basic Books, an imprint of Perseus Books, a division of PBG Publishing, LLC, a subsidiary of Hachette Book Group, Inc.

Thomas Sowell has taught economics at Cornell, UCLA, Amherst and other academic institutions, and his Basic Economics has been translated into six languages. He is currently a scholar in residence at the Hoover Institution, Stanford University. He has published in both academic journals in such popular media as the Wall Street Journal, Forbes magazine and Fortune, and writes a syndicated column that appears in newspapers across the country.
ADVERTISEMENT