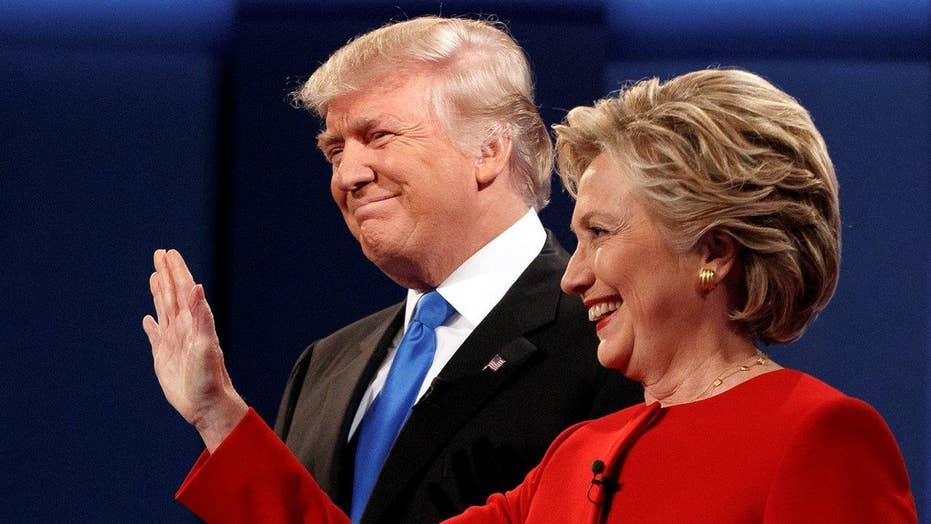 Highlights from the first presidential debate

After years of campaigning for the nominations of their political parties, Republican Donald Trump and Democrat Hillary Clinton won the right to debate each other at Hofstra University Monday night in the first presidential debate of 2016.

The Clinton campaign spent the last several days pushing the mainstream media, including debate moderator NBC’s Lester Holt, to fact-check their view of the facts.  The push from the political media was intense, and Lester Holt didn’t disappoint the left.  Holt failed to ask a single question about corruption allegations against the Clinton Foundation

The more than 90 minute back and forth conversation between Trump and Clinton successfully highlighted the differences between the two candidates.  Here are my top 16 debate moments that defined the night:

1. Hillary Clinton’s answer to a question about how she planned to create jobs. -- It was all about what the government can and will do if she becomes president.  Mrs. Clinton has no private sector experience to build on. Her answers reflected her experience.

2. When Trump slammed Clinton by saying “you’ve been doing this for 30 years. Why haven’t you been able to implement any of these ideas?”

3. When Hillary Clinton embraced her husband’s economic policies by saying, “My husband did a pretty good job”; to which Trump responded by saying “He signed NAFTA. And it’s been a disaster.”

4. When Trump turned a question about releasing his taxes into a challenge to Clinton. The Republican said he will release his taxes, against his lawyers’ wishes, IF Clinton releases the 33,000 emails she deleted.

5. When Trump hit Clinton hard for the simple apology she always gives for using a secret personal server and avoiding government transparency laws. (Hint: "It was a mistake.") He said, “It wasn’t a mistake. It was on purpose.”

6. After Clinton responded to a question on the unfolding violence in Charlotte, N.C., Trump jumped in to say “Secretary Clinton doesn’t want to use a few words -- like law and order.”

7. When Clinton made a long and passionate statement against the policing policy of stop and frisk.

8. When Clinton claimed the U.S. criminal justice system has “systemic racism” in it.

10. When Clinton gave a long answer on what she would do to ensure that foreign governments don’t get access to private servers in the U.S. (and then failed to mention that she didn’t do it for her own private server – which was hacked).

11. When Trump pushed back on Clinton’s claim that Russia has hacked the DNC. “It may be Russia, it may also be China or someone else. We just don’t know.”

12. When Trump slammed Clinton on her record: “You were Secretary of State when ISIS was small, now they are huge.”

13. When Hillary defended the Iran deal.

14. When Clinton said emphatically that she didn’t say that the TPP trade deal was the “Gold Standard.” (Which she did say and the fact checkers proved she said it immediately after she denied it.)

15. When Trump said dramatically: “She [Hillary] has experience, but it is bad experience”

16. When Trump said he will support Clinton if she wins; Clinton merely said she “supports our democracy” but failed to specifically say she will support Trump if he wins.

In the end, Trump easily proved that Hillary Clinton’s multi-million dollar advertising campaign to define him as a two-headed monster was not accurate.  Trump was tough, but fair; gracious, but firm.  Clinton was prepared but robotic.

After Monday night’s debate, Team Hillary will need to go back to the drawing board to find a strategy that will stop Trump’s current momentum.

The estimated 100 million people who watched the two candidates face off against each other now know that Hillary’s caricature of Trump was wrong. -- She was a classic politician forced to defend the status quo and he was the outsider articulating a need for change.

With forty-one days left before Americans go to the polls, Clinton is running out of time to push a coherent message as to why the Democrats deserve a third term.

Richard Grenell is the U.S. Ambassador to Germany. He is a former Fox News Contributor and a former spokesman for four U.S. Ambassadors to the U.N. including John Negroponte, John Danforth, John Bolton and Zalmay Khalilzad.