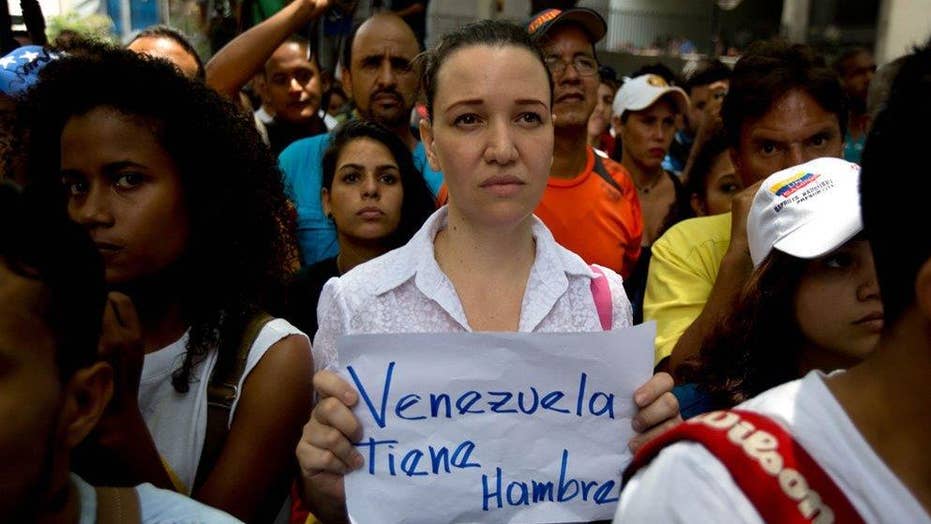 It was barely mentioned in the recent U.S. presidential elections, but Venezuela is suffering the consequences of being under the boot of one of the most atrocious and enduring Socialist dictatorships of our time.

In fact, at the end of the first U.S. presidential debates, Venezuela received a minute of attention when Hillary Clinton mentioned a former Venezuelan beauty queen to spite Donald Trump, the former owner of the Miss Universe Organization.

Interestingly, Venezuela leads in winning Miss World contests and is second in Miss Universe pageants.  And while Venezuelan women are particularly beautiful (I am of course biased), I am proud that in today’s desperate struggle for freedom, they have also proven to be extremely valiant and resilient.

Hugo Chávez, the military-putschist-revolutionary-leader who was eventually elected president and then turned dictator, claimed that his government had apparently and uniquely highlighted the crucial role of women in society.

Stating that— “women in essence can only be freed through a socialist revolution”, and “there’s no socialism without feminism”, Chávez rallied considerable female support and enthusiasm. With powerful sentences such as—“The dignity of a people is dependent on the dignity of women”, Chávez pretended to incorporate the feminine half of society which history has so often disregarded.

Nevertheless, after almost 20 years of his so-called “revolution”, my country, my people, and my gender, are experiencing the worst predicament in our history.

Our once rich and prosperous nation is now filled with scarcity, hunger, misery and despair, and women are paying the highest price.

Inflation has deeply hurt the average Venezuelan worker as the cost of a family’s basic food basket has augmented five fold in one year.

Mothers across the country are struggling and forfeiting their own well-being to feed their babies.

Today, as the health system collapses in Venezuela, giving birth to a child can frequently become a ruthless calamity. Hospitals, destitute of 90 percent of the medicines they routinely use, are congested and have no choice but to stop relying on modern emergency procedures. Many surgery rooms are dysfunctional and many hospitals are literally struggling not just to save lives but to stay open. Clean water and electrical shortages are frequent, not to mention the scarcity of basic detergents to clean hallways and hospital rooms.

Mothers have had to give birth on the steps of hospitals due to overcrowding. Diseases, which were once kept in check – and in some cases had vanished in Venezuela, such as Malaria and Diphtheria – are reappearing at alarming rates due to the lack of preventive measures threatening both mothers and their newborns in hospitals and throughout the national health system.

Premature births and miscarriages, which are expected to diminish as countries develop, are increasing exponentially in Venezuela, often due to maternal malnutrition during pregnancy.

The serious economic crisis, the hardships and expenses of finding traditional contraceptive methods are forcing many desperate women in Venezuela to contemplate being forced into sterilization. Some of them are doing this at an early age, relinquishing their hopes of becoming mothers.

Over the past few weeks, there have been many reports about Venezuelan women bartering anything, including selling their hair at the Colombian border in return for basic supplies. However, the big issue is not what Venezuelan women are selling, rather what they are giving up.

Many Venezuelan women have resorted to abandoning their children because they feel they have no other choice. In the best scenarios, they might desert their children leaving them with a relative, or a neighbor.  There is also the option of state agencies and charities, which have seen a surge in the number of parents begging for help.

Yet in some extreme cases, mothers simply abandon their children on the streets of our towns and cities. Last month a baby boy –a few months’ old– was found inside a paper bag in a relatively affluent area of Caracas.  A few weeks later a malnourished one-year-old baby was found abandoned in a cardboard box in the eastern city of Ciudad Guayana.

However, most poor women refuse to give up their children and seek work wherever or however it can be found. Heartbreakingly, this infers that more and more Venezuelan women are resorting to prostitution.

A recent report revealed that the border city of Cúcuta has become a center for prostitution. Teenage girls can make more money in a weekend in Cúcuta from prostitution than they can in a year on the minimum wage in Venezuela.

A fortnight ago, while visiting Santa Teresa del Tuy, a one hour trip from Caracas, I was invited inside a very humble abode inhabited by a grandmother, a mother and four small children.

Once inside, I extended my arms and picked up the smallest child and asked his age, thinking from his size and weight he must be eight or ten months old.

I was stunned when the mother replied he was two years old. Our babies are growing up deprived of milk and proteins, which has a direct impact on their development and health.

Many lactating mothers are malnourished because they cannot find basic foods, or pay the black market prices, not to mention things like essential vaccines.

One frequently sees long lines of mothers with their screaming babies in their arms waiting in front of a supermarket or a pharmacy. Sometimes they spend four or five hours in a queue. They are waiting for milk or diapers.

The moment the word is spread (and it spreads like wildfire) that a lorry-load of diapers or milk has been seen arriving at a given address, there is mayhem.

By the time you arrive at the address, if supplies have lasted, the chances are you can’t even afford to buy your quota of what you require at government controlled prices.  For Venezuelan women, it is permanent crisis mode.

As a former presidential candidate at the primaries and as a former Congresswoman, (opposition MP of the silenced Venezuelan parliament), I actually regard that “the dignity of a people is reliant on the dignity of its women.”

The world must be made aware of what Chavez’s revolution and his dictatorial successor Maduro have done to the integrity of the Venezuelan people and to the dignity of our women. But they must also know that the women of Venezuela are courageous and resilient. You will find them at every demonstration, at every protest.  Women of all ages standing bravely, often in the line of fire, for their freedom; for their dignity.

María Corina Machado, is one of the current leaders of the movement for democracy in Venezuela. She is a former primary candidate for president, former member of the National Assembly of Venezuela and leader of Vente Venezuela.