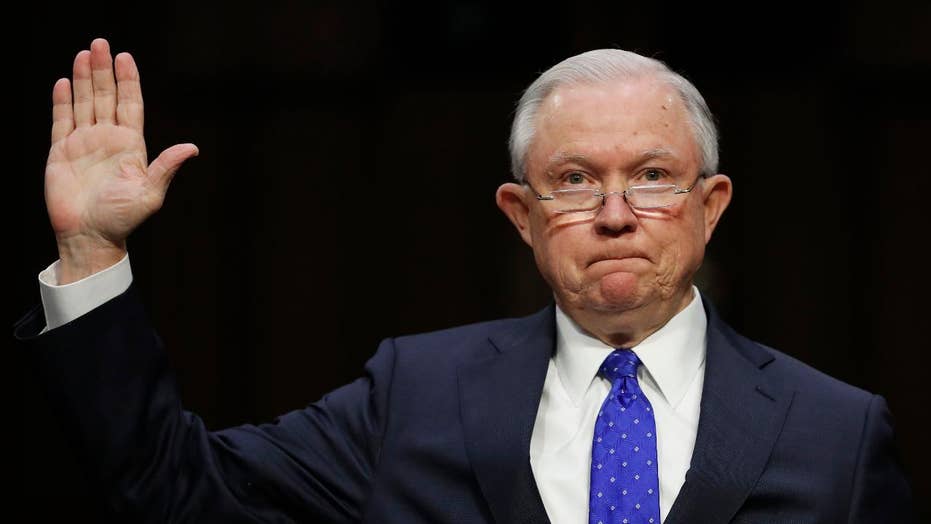 Attorney General Jeff Sessions is under fire from the left.  Meaningless tidbits from his past are being gathered by political opponents and trotted out as proof he had knowledge of Russian collusion with the Trump presidential campaign. What’s clear is that he’s an honorable person who is being attacked primarily because he’s been effective.

The left doesn’t want him to succeed and is in bed with constituencies he threatens, including convicted felons and illegal aliens. The left would grant full voting rights to both groups in the expectation that they’ll cast their new votes for big government and for disappearing borders and globalism.

As America now stares down the barrel of a nationwide opioid crisis that’s believed to have taken over 64,000 lives in 2016, the folly of Holder’s handcuffing of federal prosecutors is clear, and Sessions has turned back the clock by telling U.S. Attorneys to return to charging the most serious readily provable federal offense. That step will strengthen the Feds’ punch as the threat of harsher minimum mandatory sentences will be “on the table” as the Feds push for defendant cooperation against others in corrupt organizations.  A needed step forward.

The Attorney General also listened to concerned citizens who felt threatened by rising violent crime in major cities across the country. After a quarter century of steady decline in violent crime, that rate had risen seven percent in 2015 and 2016, with the homicide rate jumping almost 20 percent since 2014.

He listened to law enforcement from America’s deadliest cities, calling out Chicago as one standout in the volume of citizen versus citizen violence and pointed out the failure of Chicago politicians to change that city’s deadly path.

In response to the violence, the Attorney General ordered renewed focus by federal prosecutors to address the problem, determined to reverse two years of deadly increases.

The Attorney General also listened to and engaged with police groups like the FOP, National Sheriffs’ Association and Federal Law Enforcement Officers Association as he re-evaluated other actions by his predecessors and the Obama administration. Among them was a review of the life-saving “1033” program where law enforcement agencies have received billions of dollars worth of surplus military equipment.

For departments large and small that could not otherwise afford to buy the gear, they received office equipment, boats, aircraft, weapons and armored vehicles like the kind deployed to protect police and save lives in Colorado Springs, San Bernardino, and Orlando.

Overblown concerns about the “optics” of that needed gear led President Obama to order its return to the Defense Department.  However, Attorney General Sessions proved more concerned for the lives of innocent civilians and police in moving to undo another misguided Obama order.

Since his appointment, the Attorney General has recognized the insulting and dangerous ignorance of law represented by the modern “sanctuary city” and he’s taken reasonable and necessary steps in court to address the issue.

Rejecting the ridiculous notion that releasing someone like the killer of Kate Steinle to the streets rather than handing him off to ICE deportation agents somehow makes America safer, Sessions has been pushing back hard, including threatening the cutoff of federal grant funds to cities that ignore or obstruct simple cooperation requests from ICE.

Perhaps as important as any individual act or order above, the Attorney General has repeatedly conveyed a single, vital message to America’s law enforcers – “We have your back.”

The message is simple and straightforward but it comes after three years of unwarranted criticism and strife born of the fatal encounter between Ferguson Police Officer Darren Wilson and strong-arm robber Michael Brown.

The mythology of Ferguson has spawned multiple deadly attacks on police, a spike in police killings and ambushes, and raised concerns about “depolicing” in America, with cops fearing they’ll be victim of the next misinterpreted viral video of an encounter.

The political left and their media minions are driven to avenge the incomprehensible disappointment of their anointed one’s loss a year ago.

Attorney General Sessions is now and will continue to be a prime target of their anger and vengeance.

Meanwhile, he’s steadily addressing the pressing issues of his tenure with welcome energy and resolve.  As he navigates petty accusations, law enforcement hopes that his focus is unwavering.