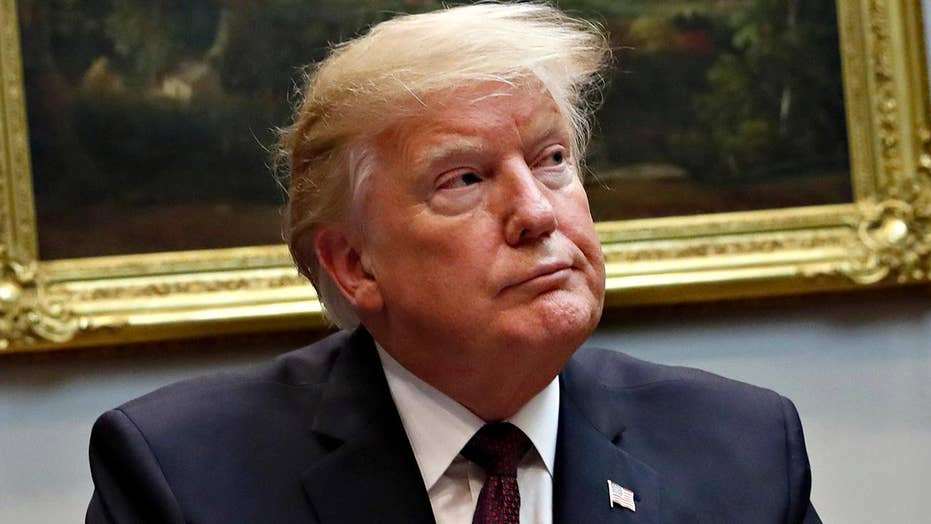 All eyes on Trump's next play after Senate reject competing bills to end government shutdown.

The president and lawmakers are back to the drawing board as both sides try to strike a compromise on border security funding to reopen the government; Mike Emanuel reports.

Friday marked day 35 of the partial government shutdown. It ended on Friday afternoon with a Rose Garden announcement by President Trump that he would sign a bill to reopen the government until February 15. Since the shutdown began over Democrats' refusal to fund President Donald Trump’s $5.7 billion border wall, let’s take a look at how much the alternative is costing American taxpayers.

There have been estimates ranging from $52 million per day to $360 million per day – that’s a big range. In order to zero in on the actual cost, we have to really understand the issue.

First and foremost are the federal workers who have been furloughed during this fiasco. Of all the financial issues, this one is the most obvious.

Those 380,000 people will need to be paid (as they should be) for not working. That is a complete and utter waste of money from the federal government’s point of view. As of day 35, what does that really mean?

The Office of Personnel Management (OPM) says federal workers are paid $84,913 per year on average, meaning each worker will be due roughly $11,378 for the 35 days of work that they (so far) simply didn’t do. That’s $4.3 billion in total.

In addition, all 800,000 furloughed workers aren’t spending nearly as much money in our economy right now. It’s been estimated that during the 2013 government shutdown, shopping by federal furloughed workers dropped by 7 percent. Most Americans spend what they earn, so that is a loss of about $640 million to our economy.

Alone, the cost associated with our furloughed federal workers is about $5 billion – which is just about the amount President Trump is requesting for the wall.

Consider the cost of all the economic disruptions being caused by the shutdown. It’s less obvious than the cost of the furloughed workers but it’s just as real.

Standard & Poor’s has estimated that this shutdown will cost the American economy $6.5 billion per week – a figure they based on data from previous shutdowns. This estimate includes the reduction in spending by furloughed federal workers (though not their actual pay), as well as other trickle-down effects: lost business and revenue to private contractors, fewer vacations and school trips due to park closures, etc. That puts us at about $32 billion just for basic economic disruption.

And remember: money not earned is not taxed. So that $32 billion doesn’t take into account the loss of federal tax dollars. At the current rate of 17 percent, that’s another $5.4 billion.

Lastly, but certainly not least, is the lack of regular services that we are all having to endure.

The federal government provides a significant amount of funding to many organizations. Take for example the University of Minnesota which typically receives about $500,000 per day in federal grant money. Since the shutdown began, the university has had to cover that cost out of its own coffers.

Yes, they expect to be paid back when the shutdown is over. But with interest? Probably not. That’s $120,000 completely lost to the University of Minnesota. And that’s just one university. The federal government spends billions of dollars annually on grants like the one to UMN. So far, withholding that money during the shutdown is adding up to an estimated loss of almost $1 billion.

Altogether, I estimate that the 35-day shutdown cost the American public somewhere around $40 billion. And that economic damage doesn’t include the unquantifiable damage being done to the 800,000 people who are going without a paycheck.

There is no doubt that the cost of this shutdown has already exceeded the amount that President Trump requested for the border wall. And if my estimate is correct, it could have paid for the entire wall to be built and maintained for 40 years.