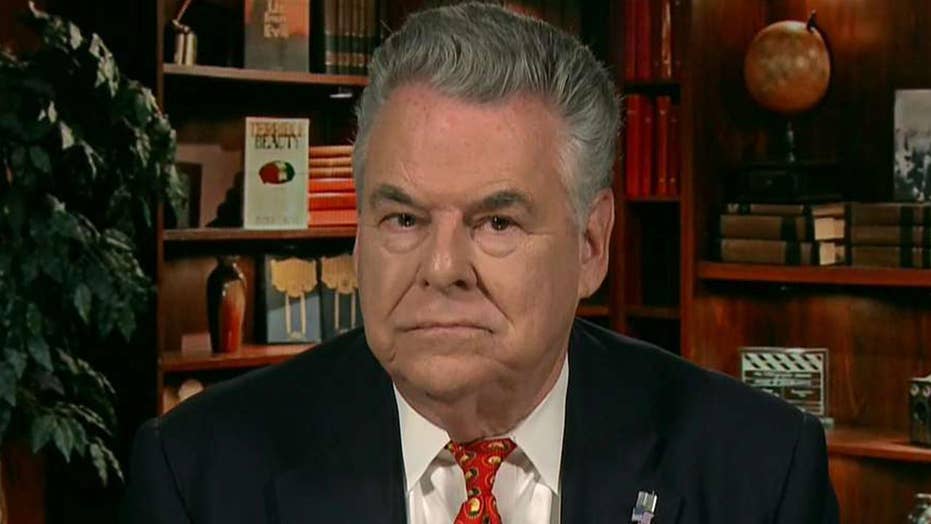 Rep. Peter King: 'Absolutely disgraceful' of FBI to question if Trump's motivation for firing Comey was tied to Russia.

House Republican sounds off on revelations that senior FBI leadership debated whether President Trump was directed by the Russian government to fire FBI Director James Comey.

A stench has been emanating from the J. Edgar Hoover Building (FBI headquarters) for over two years. It landed Saturday on the front page of the New York Times in an article citing “former law enforcement officials” claiming they had to deal with “explosive implications” that President Donald Trump was “knowingly” or “unwittingly” working for Russia. Thus, the story goes, there was a basis to begin the Russia collusion investigation.

In fact, “The Gray Lady” was covering the derrieres of the Obama administration officials involved in the cabal to frame Trump, who now fear an imminent Special Counsel finding that during the 2016 campaign there was no collusion between Trump and the Russians. The article is intended to convey the following message: Even though there was no evidence to support the allegations, those making the decision to investigate Trump did so in good faith.

No, they did not. The rotting of the FBI hierarchy began when then-Deputy Director Andrew McCabe and then-agent Peter Strzok, enabled by former Director James Comey and the Obama-era Justice Department, utilized an “unsubstantiated” dossier created by former British spy, Christopher Steele, and financed by the Clinton campaign, to request a FISA warrant to wiretap Trump campaign advisor Carter Page. Yet, the New York Times described the dossier as a “factor fuel[ing]” the “FBI’s concerns.”

GREGG JARRETT: AN FBI THAT IS CORRUPT AND DISHONEST -- LATEST REPORTS OFFER ONLY MORE PROOF

We have been involved in the criminal justice process for decades. Never have we seen a law enforcement person concerned about anything unsubstantiated.

Another “factor” was that Trump “refused to criticize Russia on the campaign trail.” Really? Where was the FBI or DOJ angst in 2012 when President Barack Obama requested then-Russian President Dmitry Medvedev tell Vladimir Putin that after the election, he would have “more flexibility” to deal with serious stuff like missile defense?

Where was the angst when Secretary of State Hillary Clinton attempted a Russian reset? Was anyone in law enforcement tossing his cookies in 2010 when her spouse, Bill Clinton, took $500,000 from a Russian entity comprised of former Russian intelligence operatives? Or when the Obama administration allowed corrupt Russian-controlled companies to purchase Uranium One, thereby acquiring 20 percent of the U.S. uranium supply.

Another “factor” was that in July 2016, candidate Trump “called on Russia” “to hack into” Clinton’s emails. No. Trump’s remark, “Russia, if you’re listening, I hope you will be able to find the 30,000 emails that are missing,” was not a request to hack. Hillary had already used BleachBit to delete the emails so “even God cannot read them” according to former Rep. Trey Gowdy, R-S.C. Trump was joking to attack his political opponent for destroying evidence or, in legal jargon, obstructing justice.

Which raises another New York Times “factor”: that firing Comey in May of 2017 was “obstruction of justice” calling for a criminal investigation in addition to the counterintelligence investigation already in place because of the pretextual factors cited above. Set aside the president’s clear constitutional authority to fire any executive branch person for any reason or for no reason.

The fact remains that a person cannot be charged with obstruction of justice if the act at issue cannot obstruct justice, meaning it cannot thwart the investigation. Even if a special counsel had not been (improperly) appointed, the FBI top dog’s departure does not affect in any way the continuing work of the FBI employees below him. Indeed, it has not. Where is the obstruction?

The New York Times story was created to obfuscate the real criminal conspiracy: violation of Title 18 of U.S. Code Section 242, which prohibits any person under color of law (i.e. Obama administration personnel) to deprive another of “rights, privileges, or immunities secured by the Constitution.” Such legal protection includes being free from a criminal investigation based on false charges.

Perhaps the bizarre January 20, 2017 email Susan Rice wrote “to herself” purporting to document a January 5, 2017 meeting with President Obama, Deputy Attorney General Sally Yates, FBI Director Comey and Vice President Joe Biden, gives a clue as to some of those conspirators. The meeting discussed the Steele dossier and Russian collusion, but curiously Rice stressed that the former president said every aspect should be handled “by the book.” Yet, Strzok had told his FBI colleague and paramour Lisa Page not to worry about Trump being elected because “We’ll stop it.”

The brazen plot against President Trump by the Obama-era FBI and DOJ continues, enabled by a complicit media. The odor of corruption has long been noxious. But the Democrats and media hold their collective noses. The criminal clique, via the New York Times, has announced to the world, “Catch me if you can.”

Joseph diGenova is a former U.S. attorney for the District of Columbia, co-founder of the law firm of diGenova & Toensing and an informal legal adviser to President Trump.