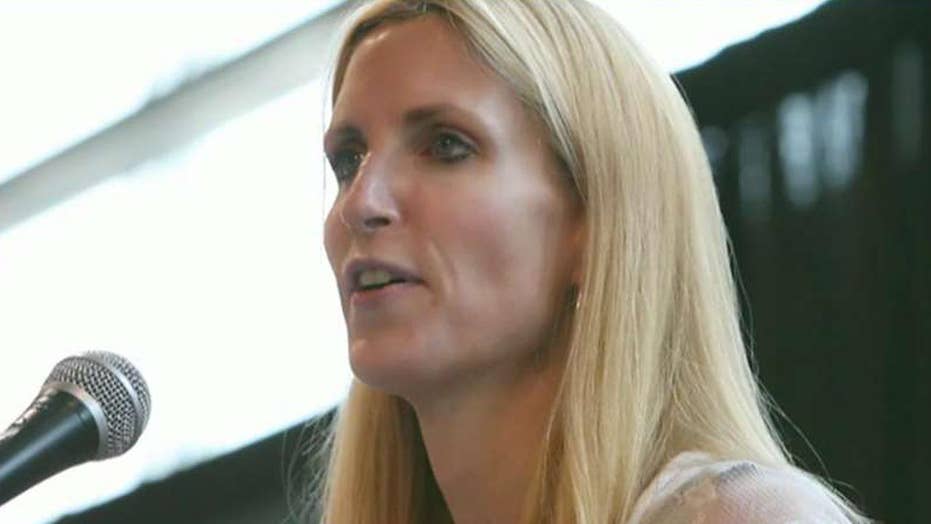 It’s “a dark day for free speech in America,” tweeted Ann Coulter this week after her talk was canceled at the University of California, Berkeley, following threats of violent protests.

Indeed, when it comes to the survival of civil dialogue, ominous signs are on the horizon.

Our social media feeds are full of disturbing videos of young campus protesters screaming, breaking glass, starting fires and even engaging in physical attacks—all in the name of tolerance and fighting bigotry.

It’s enough to make the hearts of even the most valiant free-speech advocates sink with dismay.

Strangely though, as a former journalism student, it wasn’t those inflammatory images that most saddened me. It was a more subtle one— the indifferent, blank-faced stares of student protesters who responded with stony silence when a fellow student reporter asked them to explain their perspective.

There was no passion for sharing their story, no academic thirst for debate, no intellectual curiosity to hear another viewpoint.

That’s because their goal wasn’t to start a conversation—it was to “shut it down,” to put in their own shouted words.

And that group-enforced silence (which is not an isolated incident) disturbed me more than any issue at stake in the actual protest. It feels like we’re watching the “closing of the American mind” in real time.

Ironically, liberal campuses once celebrated for birthing the free-speech movement are now birthing a new generation of youth who take pride in efforts to squelch unwelcome viewpoints—at almost any cost.

Today, those with a socially conservative or faith-based perspective are the ones most passionately calling for a free exchange of ideas—while many traditionally liberal advocates, with a reputation for being open-minded, are promoting censorship.

But we can’t blame that on the students— they are simply mirroring the actions they see modeled by adults.

Case in point: Friday, Focus on the Family’s president, Jim Daly, is speaking on building bridges and unity at the Mayor’s Prayer Breakfast in Fort Lauderdale. The theme of the event is “Together.”  But apparently some sexual advocacy “tolerance” groups would rather keep people apart—they are asking organizers to disinvite Daly and for others to boycott the event because of Focus’ biblical based stance on marriage and sexuality.

So now a Christian who holds to traditional, biblical beliefs is disqualified from a prayer breakfast?

But not all is dismal on the free-speech front:

Even as campus efforts to silence unpopular ideas reach their boiling point, there is another student movement happening that gives reason for hope: On Friday, April 28, more than 45,000 teens and college students are expected to participate in Day of Dialogue.

Annually sponsored by Focus on the Family, the student-led event enables participants to engage in a free exchange of ideas on some of the most sensitive, hot-button cultural issues of our day—including sexuality and marriage.

Yes, it’s true, these Christian students often see their viewpoints silenced, or even openly ridiculed. (That’s no surprise when you consider the studies that reveal the preponderance of left-leaning faculty members and professors on college campuses.)

But for them, resorting to inflammatory, insulting language to fight censorship is not a viable option. As people of faith, they have a different perspective:

They follow the model provided by Jesus in the Bible: He didn’t back away from speaking truth, but neither did he hold back from pouring out compassionate love on hurting and vulnerable people.

It’s that unique perspective that inspired Alicia, a recent Day of Dialogue participant, to respond with courageous grace when high school peers mocked her event with a “Satan’s Not Dead” sign. Rather than hysterically demanding that adults censor the offending messages, she responded winsomely, using as it a conversation starter. She explained to the local newspaper that it’s “true, Satan isn’t dead, just like God’s not dead, so you have to touch on that too.”  Undeterred, she hosted four Day of Dialogue discussions during free periods.

So while I agree it is a dark day for free-speech, I also see signs up of hope in the faces of students like these—who still have faith in the power of truth to compete in the marketplace of ideas, and most importantly, have the courage to call for more dialogue, not less.

As the education analyst for Focus on the Family, Candi Cushman oversees religious-freedom rights initiatives for students, including Day of Dialogue.