An entire cottage industry has sprung up around the nation, with books, articles, and pundits warning about an impending Electoral College blue shift. The theory is simple; blue-state economic migrants, in search of the opportunity they can’t find in their high-tax states, bring their liberal voting attitudes to their new homes, and then vote to enact the same failed policies they fled.

It’s a compelling and scary narrative for red-state conservatives.

In Florida, for instance, there has been an ongoing concern that retirees from New York and Puerto Ricans displaced by natural disasters (compounded by that commonwealth’s endemic corruption), are moving the state into the blue column.

In Texas’ case though, the narrative is wrong, though proponents do have a few pieces of evidence in their favor.

Exhibit A in the argument that Texas is turning blue is U.S. Sen. Ted Cruz’ 2.6 percent reelection win in 2018 over former Congressman Beto O’Rourke. This win followed on President Trump’s 9-point victory over Hillary Clinton in 2016, down from the almost 16-point margin Mitt Romney received over President Obama in 2012. Pundits draw a straight line from 16 percent to 9 percent to 2.6 percent and claim Texas’ days as a red state are over because immigrants, both domestic and international, are pushing the state to the left.

But the real world in which elections are decided is more complicated than that. Voters respond to candidates, issues and economic conditions.

In the Cruz-O’Rourke race, the Democrat benefited from an unprecedented national online fundraising push fueled by the fact that Cruz was the nation’s second-best known Republican, after his race for the presidency and his principled stands in the Senate. The left loathed Cruz and opened their wallets accordingly. 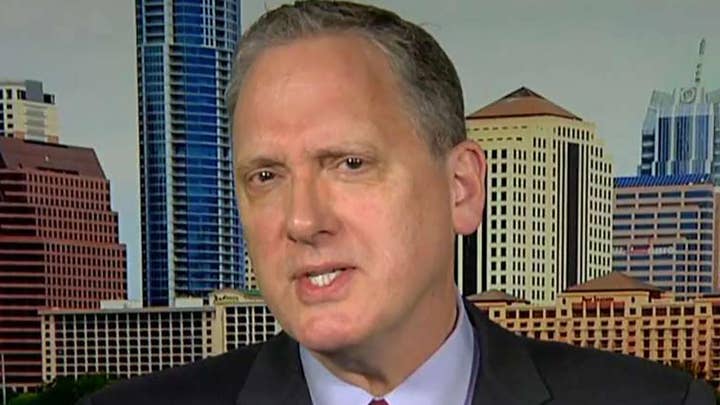 The 2018 Texas Senate race went down in history as the nation’s most expensive with some $80 million raised by O’Rourke to Cruz’ $34 million. That close race is not at all likely to be repeated in 2020, where none of the 11 Democrats vying for their party’s nomination are well-known nor likely to attract the enthusiastic support that O’Rourke generated in 2018.

To test the notion that, as some Texans half-jokingly suggest, Texas needs to build a wall — on its western border to discourage Californians from moving to the Lone Star State — the Texas Public Policy Foundation contracted with WPA Intelligence, the same polling firm used by Texas Gov. Greg Abbott, and surveyed 800 registered voters across the state.

The poll found that compared to native Texans, people who moved to Texas were more likely to have voted for President Trump, with voters born in Texas favoring Trump over Clinton by 7 percent compared to transplants favoring Trump by 12 percent. Remember, Trump won Texas by 9 percent in 2016.

This result is similar to the findings of a CNN exit poll in the 2018 Senate race between Cruz and O’Rourke showing that native Texans favored O’Rourke by 3 percent compared to people who moved to Texas supporting Cruz by 15 percent. And an earlier poll by the Texas Tribune and UT Austin found that 57 percent of Californians who moved to Texas were self-described conservatives compared to 27 percent liberals.

Other interesting findings from the poll showed that people moving to Texas were more likely than natives to live in the suburbs, be optimistic about the future, be college-educated, and be white, non-Hispanic or Asian. The poll found that native Texans were more likely to live in urban core areas. Natives and non-natives appeared to have a similar affinity for living in rural areas.

Our poll, and others before it, make a certain amount of sense. People seeking better opportunities for themselves and their families, having considered their prospects in high-tax, heavily regulated states such as California, make the logical decision to improve their chances by moving to Texas. These people, by their nature, are more likely to appreciate Texas’ hard-working culture and love of freedom.

Given Texas’ historical voter turnout levels, it’s likely that about 6 percent of its 2020 vote for president will be cast by people who moved to Texas in the past four years with about 1 percent of the vote coming from people who recently fled California. And, given the new arrivals’ political preferences, it’s likely that Texas will vote a little redder and the states they left behind will vote a little bluer because of their migration to freedom.