What Caused the Texas Blackouts?

During what will long be remembered by Texans as one of their state’s worst winter storms, millions of people lost access to power, and nearly half the state’s population, about 13 million people, have been advised by government officials to boil their drinking water, to ensure it’s safe to drink following water-systems shutdowns related to the storm-induced power outages.

Never one to let a crisis go to waste, Rep. Alexandria Ocasio-Cortez, D-N.Y., blamed Texas’s Republican-led government for the power outages and then, quite remarkably, alleged, "The infrastructure failures in Texas are quite literally what happens when you *don’t* pursue a Green New Deal."

The Green New Deal is the brainchild of Ocasio-Cortez, a self-described socialist. In addition to creating a slew of new far-left government programs – including those that would establish a federal jobs guarantee, "free" college tuition and a new system of public banks – the Green New Deal would eliminate virtually all fossil-fuel use in the United States over a 10-year period and replace most conventional power facilities with wind and solar.

ADONIS HOFFMAN: PRESIDENT BIDEN, OIL AND GAS POWER AMERICA. NOW IS NOT THE TIME TO BITE THE HAND OF BIG OIL

In the process of rolling out the Green New Deal, many of the 6.8 million jobs that are currently supported by traditional energy sectors, like oil and gas, would be wiped out.

AOC has long claimed that these changes are necessary to stop the "existential threat" of climate change – a completely ludicrous argument unsupported by any available data – but now, she’s also asserting that the Green New Deal would magically prevent power outages and other problems like those now being experienced by Texans.

Absolutely nothing could be further from the truth.

If the United States were to march down AOC’s long road to energy socialism and economic calamity, Americans would find themselves much more susceptible to the power outages Texans have been suffering through over the past week.

The primary reason the Green New Deal would make our energy system less reliable is extremely simple to understand: When the wind isn’t blowing and the sun isn’t shining, wind turbines and solar panels aren’t producing power, which means electric grids dependent on these forms of energy must have more-stable forms of power generation backing up wind and solar facilities at all times, or else under poor weather conditions, blackouts are certain to occur. (The battery technology needed to store a nation’s worth of wind and solar power doesn’t exist, and probably never will – at least, not at an affordable price.)

Rather than serve as an example for why Americans ought to embrace the Green New Deal, the situation in Texas is a perfect illustration of the dangers of renewable energy sources like wind and solar.

Over the past decade, Texas has become increasingly more dependent on wind power. According to the office of the Texas comptroller, in 2009 "coal-fired plants generated nearly 37% of the state’s electricity while wind provided about 6%. Since then, three Texas coal-fired plants have closed and the use of wind power has more than quadrupled, as more transmission lines bringing electricity from remote wind farms to urban market centers came online."

The comptroller’s office further notes, "In the same period, our energy consumption rose by 20%."

This move to renewable energy has proven incredibly problematic for Texans. As the Austin American-Statesman noted on Feb. 14, "Nearly half of Texas’ installed wind power generation capacity has been offline because of frozen wind turbines in West Texas, according to Texas grid operators."

In other words, the wind turbines AOC loves so much, the ones she wants to build all across the United States – destroying millions of acres of land and killing millions of animals in the process – couldn’t function under Texas’s harsh winter conditions. In fact, the only reason the power outages were not much worse is because Texas still relies primarily on fossil-fuel-powered energy – the very thing Ocasio-Cortez wants to eliminate. 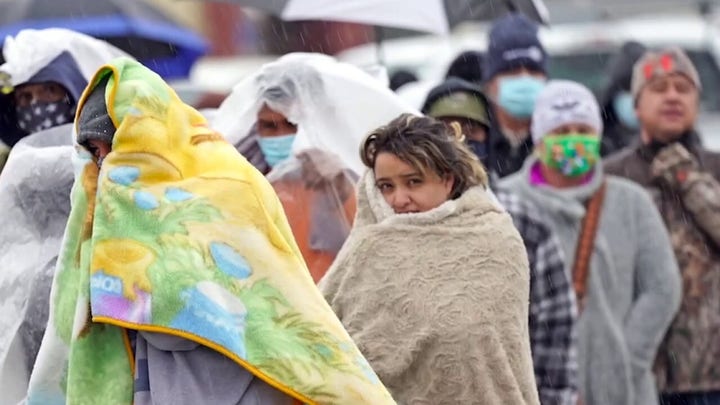 There’s no doubt that there is plenty of blame to go around for officials’ reaction to and preparation for the recent winter storm in Texas. It now seems obvious that conventional energy facilities in Texas were not properly winterized, and the Texas Public Policy Foundation has reported, "Preliminary data indicates conservation measures and rolling outages were not initiated quickly enough" to stop the power outages from getting even worse.

But all of the available evidence suggests that if Texas had never relied on wind energy in the first place, then this crisis would have been significantly minimized or even avoided altogether.

Of course, in AOC’s America, preventing such problems from occurring would be nearly impossible. Without reliable energy sources like oil, natural gas, coal and nuclear, all of which would be mostly banned by Congress if AOC had her way, the U.S. electric grid would struggle to function when extreme weather events occur.

If AOC’s Green New Deal dream were to become our nightmarish reality, you should not expect a better energy system. Instead, prepare for Texas-like energy disasters to routinely come to a community near you.