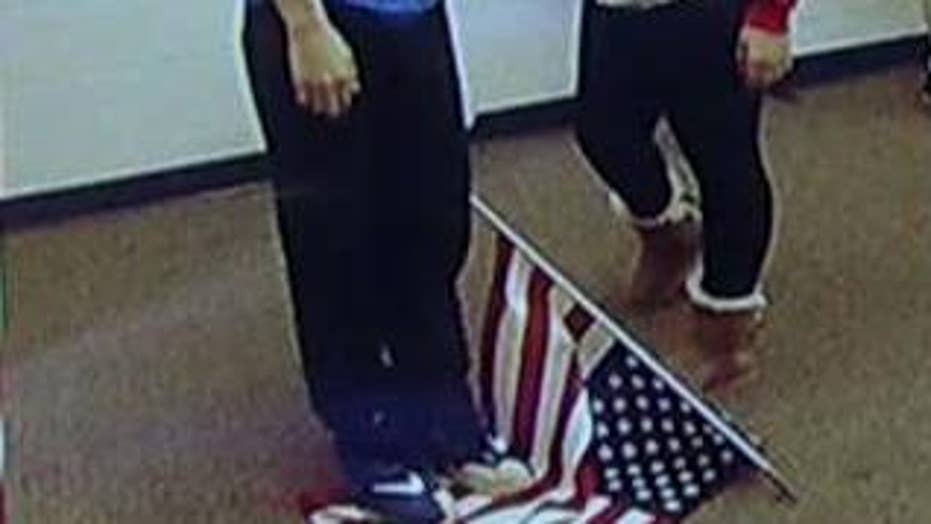 A Pennsylvania high school has launched an investigation after a photograph surfaced of a student desecrating an American flag inside a classroom at Richland High School.

The repulsive photograph, reportedly posted online over the Valentine’s Day weekend, shows a young man standing on Old Glory as a female student stands nearby with her middle finger raised.

Seething outrage would be a good way to describe the reaction in Richland Township – a country town that prides itself on patriotism.

“What a shameful display of ignorance, contempt and utter disregard for the country, flag and veterans’ sacrifice,” one resident wrote online.

“What a disgrace,” wrote another. “Maybe they should be put on the front lines, so they can get a taste of reality.”

“This behavior is repulsive,” wrote the mother of an RHS graduate currently serving in the Armed Forces. “To make matters worse, Richland Township is home to many of the Armed Forces units that also defend that flag.”

As detestable as the desecration may have been – the response from the Richland School District has been admirable – and downright remarkable.

“This photo is not representative of the feelings of the 1,600 students in our district,” Superintendent Arnold Nadonley told the Tribune-Democrat newspaper. “Out of respect for our veterans – both those who have defended our flag and those still serving in our military – nobody wants to see something like this.”

The district solicitor posted a message online promising a “timely and thorough review of this incident and will implement appropriate legal discipline.” They called the photo “unfortunate and unpatriotic.”

"The ACLU enjoys nothing better than an old-fashioned American flag burning."

The students involved in the desecration have not been identified. However, the mother of the young man reached out to television station WJAC to apologize.

“My son did a stupid and impulsive thing,” she said in a statement. “He apologized immediately and regrets what he did. We appreciate the people reaching out with understanding and forgiveness. Our family has the highest respect for our country and military and we would like to issue a sincere apology on behalf of our entire family.”

“As long as they were trying to send a message of protest, it sounds like they are protected to me,” legal director Witold Walczak told the Tribune Democrat.

The ACLU enjoys nothing better than an old-fashioned American flag burning.

“But we’ll pursue this matter in whatever legal way we can, with due process and with respect to the flag, our Constitution and our country,” he said.

My goodness! I never thought I’d hear a public school administrator stand up to the ACLU and defend American patriotism!

We still don’t know why the troubled teenagers did what they did -- but the school district is definitely going to use the incident as a teaching tool. Consider these words from Principal Brandon Bailey.

“We need to remember that great adversity often leads to great opportunity,” he wrote online. “We need to unify and use this opportunity to show to the world that the Richland School District has some of the finest students, faculty and staff in our great nation.”

Instead of parking the offenders in a holding cell -- maybe they could be dispatched to work at a nearby VA hospital. Perhaps they could do yard work for widows of local war veterans? Or maybe the school could host an assembly featuring graduates currently defending our freedom?

Let’s hope those two wayward teenagers have learned their lesson. When you see the Star-Spangled Banner, you stand and salute – you don’t stand and stomp.