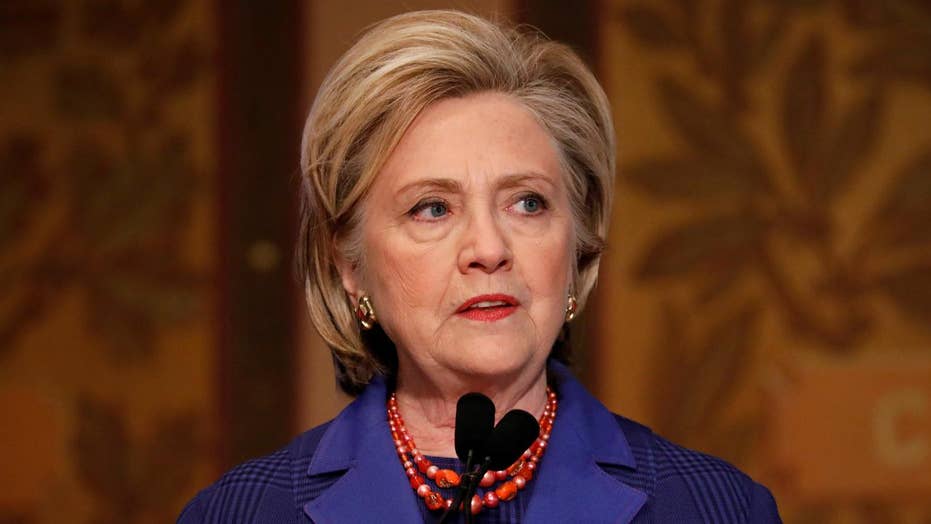 Time for Hillary to accept responsibility for 2016 loss?

Woe are the Democrats. For generations now, they’ve been telling the American people that only they, and their cohort of liberals and leftists, understand and truly value women. Because of their special understanding of women, only they can be trusted to do what’s right politically for them, they tell us.

Then came Hillary Clinton pulling the curtain back on that dangerously false narrative. At a speech in Mumbai, India, the twice-failed presidential candidate blamed her loss on mindless women who do as their husbands tell them.

Again contemplating why she lost the 2016 presidential race, Mrs. Clinton blamed certain women for not thinking for themselves.

“We don’t do well with married, white women,” she said, because of “ongoing pressure to vote the way that your husband, your boss, your son, whoever, believes you should,” Mrs. Clinton told the audience.

It’s obvious from the last election that the Democrats also didn’t do well with married, white men. Yet, Mrs. Clinton doesn’t argue that it was Republican women bullying and pressuring their husbands into voting a certain way.

In other words, the leading liberal feminist in the country is pushing the ironic narrative that if you’re a woman who does not conform to the liberal narrative, you have no mind of your own and are controlled by the men in your life.

Yet it’s conservatives who are sexist and reliant on perpetuating gender stereotypes. Got it.

Having come from the left, one of the most constant and appalling demonstrations of sexism in the feminist movement was the degrading and dehumanizing of women with whom liberal feminists disagreed.

One of the most famous public illustrations of this is brought to us by Gloria Steinem, an icon of the modern feminist movement. In 1993, Ms. Steinem declared that then-Senate candidate from Texas Kay Bailey Hutchison was “a female impersonator … someone who looks like us but thinks like them,” reported the Orange County Register at the time.

Publicly declared from on high by the Supreme Feminist for All Women: You are not a woman at all if you don’t think like us.

When this columnist was within the feminist establishment in the 1990s, Ms. Steinem’s remarks reflected an attitude that was standard operating procedure. Heck, maybe Hillary thought she was doing women who don’t fall in line a favor by accusing them of simply being dumb pawns, instead of stripping them of their womanhood entirely.

Knowing what Mrs. Clinton exposes about the inherent sexism on the left, even her allies expressed dismay at the comments. FoxNews.com reported, “Clinton’s former 2008 presidential campaign manager Patti Solis Doyle didn’t defend her remarks. ‘Look this was bad. I can’t sugarcoat it,’ Solis Doyle said on HLN this week. ‘She was wrong and clearly it’s not helpful to Democrats going into the midterms and certainly not going into 2020.’ “

“Sen. Claire McCaskill, D-Mo., who is up for re-election, come the midterms in November, in a state Trump won by 19 points, [noted], ‘Those are kind of fighting words for me, because I’m partial to Missouri voters,’ McCaskill told The Washington Post. ‘I think they were expressing their frustration with the status quo,’ ” Fox News reported.

The Washington Examiner noted, “What if the notion that women’s votes somehow belong to Democrats by default was always the product of leftist self-delusion and nothing more? What if these women voted for Trump of their own accord, in part because like many of the people who actually did vote for her, they were turned off by Clinton’s obvious and easily detectable insincerity and inauthenticity?”

And Liz Peek, a writer and frequent guest on Fox Business and Fox News tweeted: “Hillary is supposed to be supportive of women but secretly she thinks they are cowed by husbands & bosses — shame on her. She can’t imagine women didn’t support her — that’s the biggest sign they actually think for themselves.”

Hillary Clinton is turning out to be a touchstone for our time, just not in the way she expected. She reminds us almost every day that the left exercises a sexism that this nation has rejected. It also reminds us of the importance of a genuine advocacy for women in this country that instead of punishing women for thinking for themselves, we value and elevate all women, making sure they’re free to make choices that best suit them.