The Hillary Follies continue. For Democrats and the left (but I repeat myself), reality for them has always been a construction that they feed to you through media.

The desperate effort by Hillary Clinton and her supporters to keep her relevant through simple exposure in the media continues apace. But if being a celebrity is what makes a person important and valuable, then Mrs. Clinton might want to worry about O.J. Simpson’s rising Twitter star knocking her off her perch.

The latest news from the Hillary entertainment front is the sad failure of the “Hillary and Clinton” Broadway play. Maybe you didn’t even know there was such a thing, starring actors John Lithgow and Laurie Metcalf. And even those who did know, we’re not rushing to see it.

For some reason, even in super-bright neon blue New York, no one wanted to see “Hillary and Clinton.” According to the Hollywood Reporter, “The early closing date for ‘Hillary and Clinton‘ is due to underwhelming ticket sales. The play, which cost $4.2 million to produce, began performances in March and drew mixed-to-positive reviews, but has struggled to fill seats, reaching only 36 percent of its gross potential in the last two weeks.”

Underwhelming sales. Struggling to fill seats. Actually, this could have been very successful performance art as an example of what happened to Mrs. Clinton in Wisconsin and Michigan and Pennsylvania and Florida in 2016. 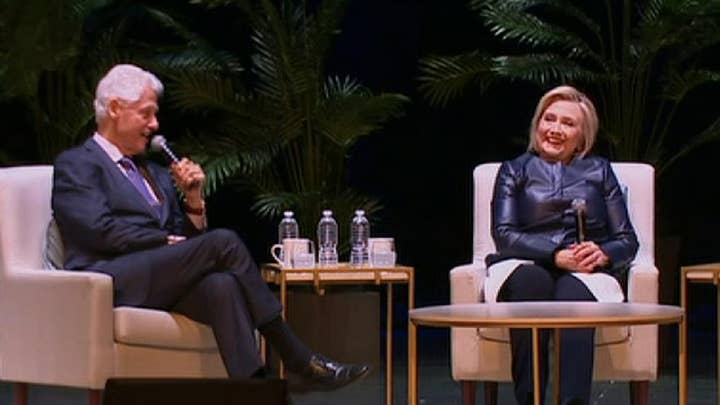 But in reality, this is a classic Democratic adventure: Have feelings, throw a lot of money at something that’s a bad idea in the first place, lose more money and then shrug and walk away, suffering with more feelings. The only good news in this case is that Democratic politicians and cheerleaders are now doing that to themselves instead of to you.

This play was touted a fiction about what could have happened in a hotel room in New Hampshire during her failing 2008 campaign against Barack Obama. At least Mr. Obama managed to pretend that he liked the country. We found out soon after his election that his contempt for the nation was his driving force. Both Mr. Obama and Mrs. Clinton have always relied on media and celebrity to push them through.

The New York Times theater reviewer Ben Brantley tellingly wrote in his “Hillary and Clinton” review, “Even though some of what happens here is pure fiction I doubt you’ll be surprised by anything that’s said.” In other words, sure it’s fiction, but it’s true, too.

And isn’t that perfect? It is the epitome of the fake news that the left continues to rely on and has now infected everything they do. Another example comes from as far back as 2004. The Times was working to defend Dan Rather after his infamous fake story about George W. Bush’s service in the Texas National Guard. The CBS news anchor relied on obviously fake documents an internet blogger exposed. The Times’ response was a headline on Sept. 15, 2004, that read, “Memos on Bush are fake but accurate, typist says.”

As a feminist left-wing organizer in the 1990s, I worked on the Clinton for President 1992 campaign in Los Angeles. When I saw the Democratic machine and the feminist infrastructure in the country all run to defend him during the Monica Lewinsky debacle, that was another straw confirming for me the fraud of what is now called the progressive movement.

A play starring celebrity actors with a fictionalized script about a fake but true exchange between Mrs. Clinton and Monica Lewinsky’s ex-boyfriend is not the only recent Hillary Follies failure.

The Clintons revived their “speaking tour” this year, and they struggled with the same issue they faced last year: No one was buying tickets. They visited 13 cities, and the Daily Caller reported that “some tickets [were] on sale for 50% off at about $20 in the 13 cities they visited.”

This speaking tour involves Bill and Hillary Clinton having a conversation with an actor who plays a moderator. As it became clear that the Clintons were struggling to find people who wanted to listen to them, many clever people on social media had a variety of suggestions to liven things up.

It’s safe to say it would be a huge success, and maybe even end up on Broadway, if Ms. Lewinsky was the moderator.

Or perhaps Kathleen Willey, Juanita Broaddrick and Paula Jones could alternate as the questioner of Bill Clinton and his enabler. Now that would sell tickets.

But that, of course, is too real. The Clintons, while they are out of favor in the Democratic Party, remain the template for politicians who don’t like the country and believe themselves the only ones capable of fundamentally transforming a nation drowning in deplorables. The only difference in the cast is the age of the star. The ignorance and contempt are the same.

President Donald Trump’s 2020 presidential campaign launched this week. To this day, his detractors still complain about his transparency and bluntness. Oh, they call it something else, but the fact of the matter it is the reason Mr. Trump has been a shock to a political system that relies on gaslighting the voters.

Considering the extraordinary crowd at his kickoff rally in Orlando, Democrats and their supporters in Hollywood and New York may continue to try to remake the truth with their scripts, but the real life that Mr. Trump is improving for all of us is the only thing that matters.