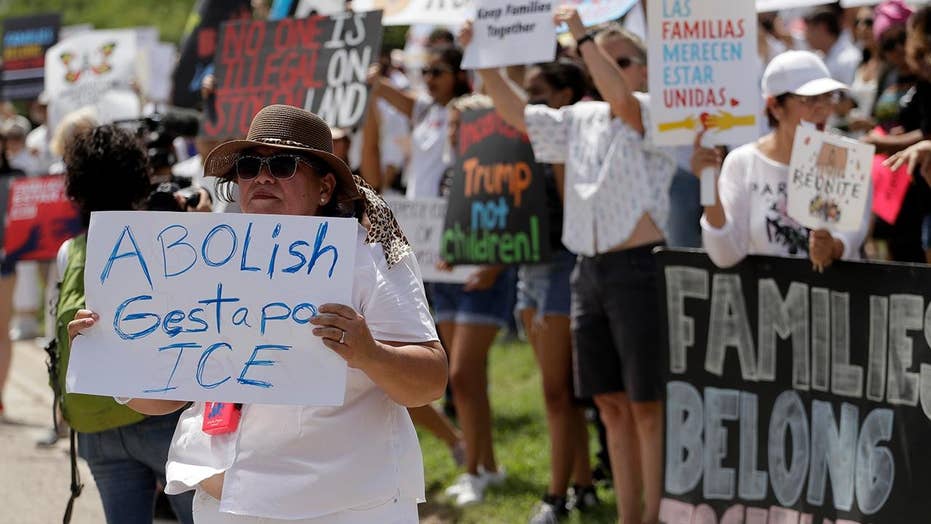 Abolish ICE: What to know

What to know about ‘Abolish ICE,’ and how the movement went from the far-left and became mainstream.

In the midst of the remarkable success of President Trump on so many fronts, the Democratic Party leadership is grasping at a new slogan: The call to abolish the Immigration and Customs Enforcement (ICE) agency.

A 28-year-old new Democratic star Alexandria Ocasio-Cortez, who defeated longtime congressional incumbent Joe Crowley in the recent New York primary, has led the call to abolish ICE. She is now being parroted by a number of other Democrats.

The Democrats were not prepared for Ms. Ocasio-Cortez’s victory, but then again, the Democrats aren’t usually prepared for anything. As with Hillary Clinton, the liberal Masters of the Universe presumed Mr. Crowley would win his primary (again). They were wrong.

Ms. Ocasio-Cortez is a member of the Democratic Socialists of America. She ran on abolishing ICE, and that makes sense considering the New York DSA’s tweeted its policy positions: “Abolish ICE. Abolish prisons. Abolish cash bail. Abolish borders.” All listed next to an emoji rose image, as though that would make their recipe for disaster seem somehow more pleasant.

The problem with this new demand by the Democrats is that ICE has nothing to do with controlling the borders. It’s the U.S. Customs and Border Protection agency (CBP) that manages access to the country. ICE is responsible for enforcing immigration laws within the country.

“Abolish ICE” banners and signs were the leading image at the recent immigration rallies and marches, including calls to abolish “profit.” The new narrative is that ICE is a “gestapo” facilitating the family separation policy at the border.

Yet how serious is a policy when you have no idea what the facts of the matter really are? The problem with this new demand by the Democrats is that ICE has nothing to do with controlling the borders. It’s the U.S. Customs and Border Protection agency (CBP) that manages access to the country. ICE is responsible for enforcing immigration laws within the country.

This is why Mr. Trump began tweeting at various Democratic politicians, asking them why they wanted to abolish the entity that was taking on the murderous MS-13 gang. ICE also engages in anti-smuggling efforts, money laundering investigations and arresting criminal illegal aliens.

With marches and rallies organized around the absurd “Abolish ICE” demand, many might think this is what all Democrats now believe. But that presumption would be wrong.

How disconnected from their own base is the Democratic Party? We have one clue, courtesy of a new Harris/Harvard poll conducted by pollster Mark Penn, the former Bill Clinton aide. He asked about the “Abolish ICE” proposal and whether the agency should be disbanded. Sixty-nine percent of registered voters said no, including 59 percent of Democrats and 73 percent of independents.

Amazing to see that six out of 10 Democrats disagree with the national effort by Democrats who appear to be leading the party.

Much of the rhetoric about the Democrats is that they’re disconnected from the average American. That appears to be true, but the more surprising revelation is that they’re as out of touch with their own base.

America’s problem, it seems, is not that we’re divided, as the Harris-Harvard poll actually shows the opposite; the problem is that there are politicians who don’t represent many people at all and attempting to instill fear and division among Americans in general.

There is another political reason for a narrative pushing sudden outrage where there was none before. The policy at the border involving separating families and detaining adults and children until there were resolutions to their cases, was policy during the Obama administration as well. June was a month with many victories for the Trump agenda and for the country as a whole. What are Democrats to do when there’s too much good news? Distract.

June 1 — A CNBC headline announces: “The US economy suddenly looks like it’s unstoppable.”

June 5 — The California primary did not deliver the beginning of the mythologized “Blue Wave,” with voters even putting a Republican in play for the gubernatorial race also on the midterm ballot. Turnout was average; there was no new Democratic enthusiasm.

June 14 — The Justice Department’s inspector general’s report on the FBI handling of the Clinton email server and emails is released. Also on June 14? The first march of outrage against the family separation at the border.

June 30 — More marches and rallies are held, but with the “Abolish ICE” slogan as a main message.

The latest results of rhetoric from the left and its apparent commitment to provoking people to commit violence includes vandalism at a Nebraska Republican Party office with graffiti to abolish ICE; a Secret Service officer was assaulted outside the White House by a man participating in an immigration rally; and protests at an ICE building in Philadelphia turned violent.

In the end, this is not an organic movement of any sort, but a typical leftist organizing tactic with which to raise money, distract voters and “win” the news cycle.

Americans, including Democrats, do not like what they see, and as the economy continues on its trajectory and the president continues to focus on policy, it will also not bring the Democrats success in the midterms.