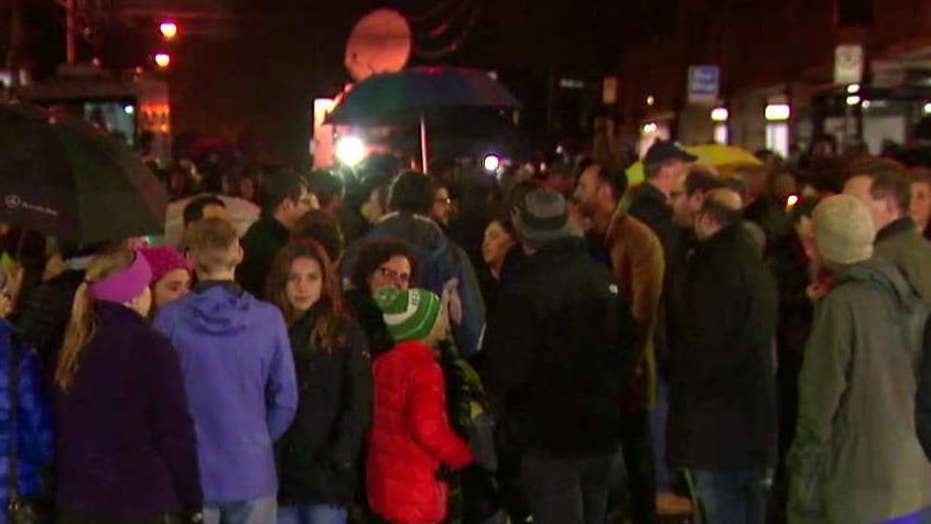 Mourners gather in the Squirrel Hill neighborhood in show of support for the Tree of Life synagogue; Matt Finn reports.

I learned about Saturday’s mass murder of 11 congregants at a Pittsburgh synagogue while traveling in Austria with a group of 150 Jews from around the world. We are headed for the site of the infamous Mauthausen Concentration Camp, where more than 90,000 Jews were murdered during the Holocaust.

I am among the leaders of the Simon Wiesenthal Center traveling with the group to the former death camp. On Sunday we will unveil a plaque honoring Wiesenthal, who devoted much of his life to finding and bringing to justice Nazi war criminals who took part in Hitler’s Final Solution, which was designed to rid the world of the Jewish people.

We are going to lay a plaque at the Mauthausen site, now preserved as a memorial to those who died at the camp. The plaque bears a quotation from Wiesenthal: “Hope Lives When People Remember.”

Wiesenthal lost 89 members of his family at the hands of the Nazis. He was too weak form starvation to even stand when U.S. soldiers burst through the gates of Mauthausen in May 1945 to liberate the camp and save him and other prisoners from what seemed like certain death.

The murders Saturday at the Tree of Life synagogue in Pittsburgh came during what was supposed to be a joyous ceremony, a brit milah (circumcision) welcoming an 8-day-old baby boy into Abraham’s fold.

The Anti-Defamation League called the shooting "likely the deadliest attack on the Jewish community in the history of the United States."

Sadly, we are not shocked by the attack in Pittsburgh. History’s oldest hatred doesn’t always garner headlines when it rears its ugly head in the United States, despite the fact that FBI statistics annually confirm that African-Americans are the first target of race-based hate crimes and American Jews are by far the first target of religious-based hate.

We aren’t shocked because in 1999, Buford Furrow – a white supremacist and anti-Semite – loaded his van with munitions and explosives and drove from Oregon to Los Angeles.

Furrow’s target was the place where I work, the Simon Wiesenthal Center Museum of Tolerance. By his own admission, it was our security inside and outside our facility that sent him scurrying to find a soft Jewish target. And he did – wounding children at a Jewish day camp and then gunning down a Philippine-American U.S. postal worker.

Tragically, on this quiet Shabbat in Pittsburgh there was no security guard. But it is not clear if the domestic terrorist who killed the 11 Jews and wounded six other people, including four police officers, could have been stopped by anyone.

While the hate hasn’t changed since 1999, a few things have.

The Anti-Defamation League called the shooting "likely the deadliest attack on the Jewish community in the history of the United States."

First and foremost, social media. The man accused of being the Pittsburgh shooter was reportedly very active on Gab – a favorite with extremists from the alt-right, where he has regularly spouted virulent anti-Semitic invective. The empowerment and validation supplied by the world’s most powerful marketing tool will certainly emerge as a key sustainer long-standing hatred.

Second, anti-Semitic hate is increasingly accepted without a whimper in many Western democracies, including in Europe. In many capitals – including Paris, London, Copenhagen, Stockholm – it is dangerous for Jews to wear a kippah (skullcap) or a Star of David necklace, lest they be harassed or worse by neo-Nazis or Islamist extremists.

Third, anti-Semitism is the mother’s milk of anti-Israel propaganda from Iran and from the terrorist groups Hamas and Hezbollah. Nearly 40 percent of Norwegians and millions of other Europeans have come to believe that Israelis treat Palestinians the way Nazis treated Jews. These attitudes have been incorporated by some churches and on many U.S. campuses, with resulting increases in hate crimes and intimidation of Jewish students.

Fourth, the United Nations convenes a meeting condemning anti-Semitism once a year. Too bad the other 364 days a year are used by the U.N. Human Rights Council, the U.N. Relief and Works Agency, and the U.N. General Assembly to condemn the Jewish state and its supporters.

The heroics of outgoing U.S. Ambassador to the U.N. Nikki Haley in condemning the double standard against the Israel are deeply appreciated by American Jewry, but too often she was a lone and lonely voice. President Trump has also put the U.N. and its agencies on notice that they must change their behavior or risk losing even more American financial support.

President Trump denounced the Pittsburgh synagogue attack. But he must do more. We urge him to convene a meeting of religious leaders across the social and political divide to address the hate. We need real leadership from both political parties to stop our societal slide before it is too late. On this issue, we should all be able to unite, regardless of our political differences.

At Mauthausen on Sunday, I will speak about U.S. Army Col. Richard Siebel from Defiance, Ohio. He served as the commanding officer at the newly liberated Mauthausen Camp. He replaced the flag of the German Third Reich with another flag, secretly sewn by the inmates in the weeks leading up to liberation.

The prisoners sewed the American flag. It had 13 stripes, but none of the prisoners knew exactly how many states there were in the U.S. So they sewed 56 stars. Never mind. It was the idea and ideals of what America stood for that gave them hope to hang on another hour, another day, another week.

That flag today is on display at our Museum of Tolerance. Let’s hope that Americans of all races, religions, and political persuasions will connect with America’s true greatness and bottomless potential for good.