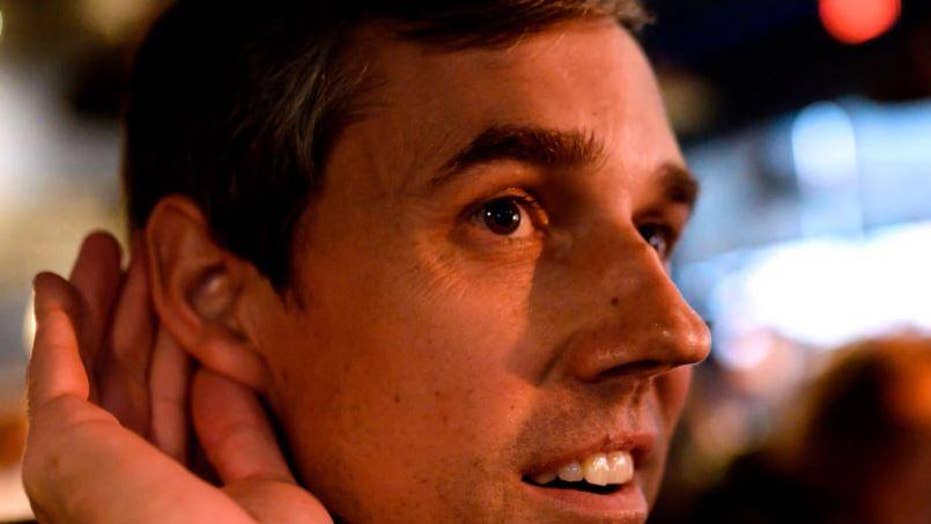 Beto O’Rourke is confronted by a voter about his charitable giving after recently released tax returns showed he and his wife gave away a tiny fraction of their income.

Several Democratic presidential candidates released their tax returns in an effort to contrast their transparency with President Trump’s opaqueness regarding his finances. But by attempting to prove their virtue, they accomplished just the opposite.

Their tax returns revealed that each of the Democratic candidates gave an embarrassingly low percentage of their sizable income to charity in recent years. Massachusetts Sen. Elizabeth Warren won the title as most charitable, giving a whopping 5.5 percent of her household’s $906,000 income to charity in 2017. In second place is Washington Gov. Jay Inslee, who, along with his wife, gave 4 percent of their income in 2017. New York Sen. Kirsten Gillibrand and her husband contributed 2 percent of their $215,000. Minnesota Sen. Amy Klobuchar contributed 1.9 percent out of $338,500, while California Sen. Kamala Harris contributed just 1.4 percent out of $1.9 million.

Finally, Beto O’Rourke and his wife gave 0.3 percent of their $366,455 to charity in 2017. Good news: that’s up from 0.2 percent in 2016. Don’t worry, though, O’Rourke’s campaign team has announced they are busy looking for the “thousands of dollars” of charitable giving that weren’t, for some reason, reflected on his tax returns. The American people anxiously await their excavation.

And yet, that’s certainly not the reputation the right has in the media. Conservatives — especially those who voted for Donald Trump — are consistently accused of racism, elitism and bigotry for their positions on welfare and immigration. Progressives, on the other hand, are empathetic, inclusive and kind, eager to care for the least of these.

But if progressives are so concerned with the plight of the poor and the exploitation of the marginalized, why aren’t they more willing to give to the many organizations who help these groups overcome their challenges?

I doubt the answer is more complicated than this: they just don’t want to. If a wealthy person wants to give to charity, there’s nothing stopping them. I understand it takes a lot to cover the expenses of three homes, but you’d think once Sanders hit millionaire status he’d be willing to fork over a little bit more than 3 percent of his earnings. This is the same socialist senator who often decries the greed of the 1 percent. He must be speaking from experience.

The fact is, there’s nothing more hypocritical than a socialist who’s selfish.

But he’s not necessarily speaking for the experience of others who share his pay grade. According to 2014 IRS tax data, Americans who made more than $1 million that year contributed an average of 5.6 percent to charity — well above Sanders’s percentage.

Democrats understand they don’t have to be charitable themselves to be hailed as heroes for the oppressed. No one expects them to give their own money to the needy; they’re deemed compassionate just by telling other people to give theirs. They know very well that the media will cover for their selfishness. They will still be able to effectively sell themselves as vigilantes for the downtrodden by spinning emotional arguments about a mandatory living wage and "Medicare for all" despite the crushing costs of these policies to the rest of the country.

Plenty of Americans make far less than the Democratic presidential candidates, but they give more to charitable causes. And yet these are the Americans who Democrats are demanding pay even more to cover their socialist programs. That doesn’t sound like compassion to me. It sounds like manipulation and greed — the two characteristics, ironically, these Democratic candidates ascribe to “the wealthy.” A different and worse kind of wealthy, of course, than them.

To be fair, President Trump has yet to release his tax returns, so we can’t safely say he’s been any more generous with his money than the Democratic candidates have been. But, then again, he’s also not asking you to fork over half of your paycheck to take your private health care coverage away.

The fact is, there’s nothing more hypocritical than a socialist who’s selfish. But it seems I repeat myself.

Allie Beth Stuckey is host of the Blaze Media podcast "Relatable," where she tackles the latest theological, cultural and political issues from a conservative, millennial perspective. Stuckey speaks to college students, Republican organizations, Christian ministries, and businesses across the country about the importance of biblical and conservative values. She also offers frequent commentary on Fox News. Her first book “You’re Not Enough (and that’s okay)” publishes on August 11th.