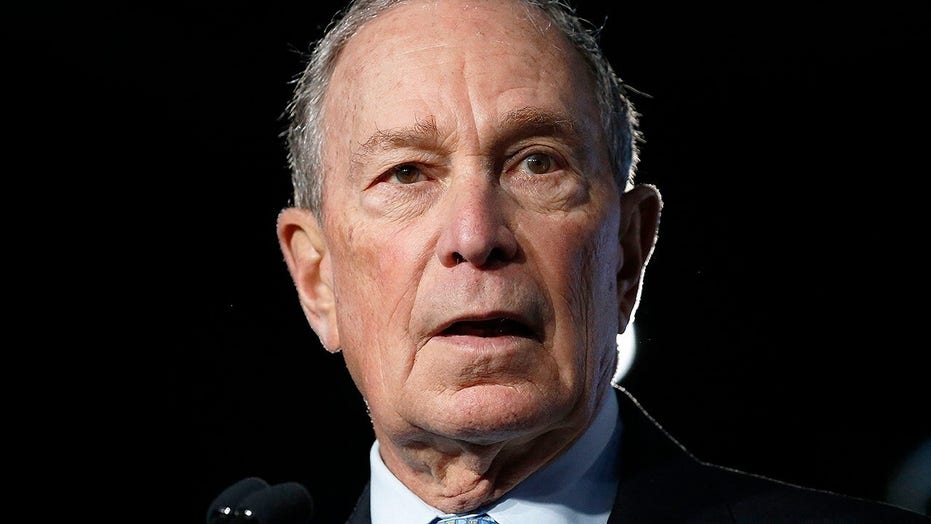 Bloomberg not on the ballot but on candidates' minds in Nevada

Democrat rivals continue their attacks against Michael Bloomberg on the campaign trial in Nevada; Peter Doocy reports from Las Vegas.

About a year ago, when the Democratic primary was in its infancy, former New York City Mayor Mike Bloomberg took a swing at the pandering former Rep. Beto O’Rourke, D-Texas, for his groveling to the woke crowd. Said the mayor: “Beto -- whatever his name is -- he's apologized for being born.” Bloomberg was referring to O’Rourke’s apologetic tone for having been born a privileged white male.

Many moderate Democrats could only hope that a non-politically correct Democrat with a backbone would enter the race, and Bloomberg’s pushback on Beto’s pathetic self-flagellation led many to pray he would be the one. Authenticity would be crucial to winning the nomination, which is why those who tried to reinvent themselves -- like Sen. Kirsten Gillibrand, D-N.Y. (a former gunslinging border enforcer) -- quickly fell to the wayside.

Almost a year later, Bloomberg would enter the race. And what did he do? He immediately adopts the same inauthentic, groveling apology tour that he lambasted O’Rourke for. His greatest successes -- the steep reduction in crime and the lifting of school test stores via his taking on the teacher’s unions -- were now things of which to be ashamed. An authentic Bloomberg would today be bragging about the success of stop and frisk, with a pitch to frightened minority residents in crime-ridden cities from Chicago to Baltimore that he had a way to reduce the murder rate by tenfold as he and his predecessor former New York City Mayor Rudy Giuliani had done in the nation’s largest city.

BERNIE SANDERS SLAMS BLOOMBERG, SAYS TRUMP WOULD 'CHEW HIM UP AND SPIT HIM OUT'

I was born in New York City and raised in its suburbs. In the 70s, 80s and 90s parents would do everything within their power to inhibit their twenty-something child from naively strolling in a park or taking a subway in the wee hours of the night. At the time, the city was a crime-ridden hell zone. There was a perception that major cities had become ungovernable.

Today's millennials living in New York City have no memory of just how dangerous the city was in those days. They take for granted that since they became adults they were able to ride a subway or walk the streets at 2 a.m. without a second thought. But those of us old enough to remember understand that the bad old days can resurface at any time. In fact, we’re heading there now because of liberal policies ushered in by a socialist mayor, Bill de Blasio, who is undoing the tremendous gains that Giuliani and Bloomberg implemented.

The police chief at the time, William Bratton, implemented the Broken Windows Theory to clamp down on petty crimes in order to preempt the violent felonies that often would be committed by those same perpetrators. Graffiti was prosecuted, as was jumping the subway turnstile or harassing motorists with a dirty squeegee at the entrance of a tunnel.

And of course, stop, question and frisk became the most effective gun control program ever instituted in New York City's history. Unfortunately, and ironically, Bloomberg inaccurately described the program put in effect by Giuliani. Suspects were originally only stopped upon reasonable suspicion. Thereafter, they were questioned and frisked if there was further suspicion of the individual being armed. A 2015 interview of Bloomberg claiming that young minority men should be “thrown up against the wall” was not only disgusting and unconstitutional but was a distortion of the stop, question and frisk policy first implemented.

Bloomberg should have held his ground on his previous statement that more police are placed in minority areas because more crime is committed there. He should have been noting that the police were sent there because of the complaints that came from minorities themselves. He was helping the minority community by responding to their needs and preventing the murders of their residents. Approximately nine out of ten victims of shootings in the city were people of color.

Now that many of these proven conservative tactics have been abolished, we have been witnessing an alarming increase in crime in New York City. Violent crime in the city is up by 17 percent in the first month that a new bail reform measure took effect.  Do Bloomberg and his fellow Democrats believe that minorities are in favor of such lunacy?

If Bloomberg simply stopped pandering to the woke white voter and the criminal element and instead spoke to the overwhelming number of minorities who are law-abiding and want safe neighborhoods and schools, just like white residents, he would be deemed both more authentic and the problem solver that he professes to be.