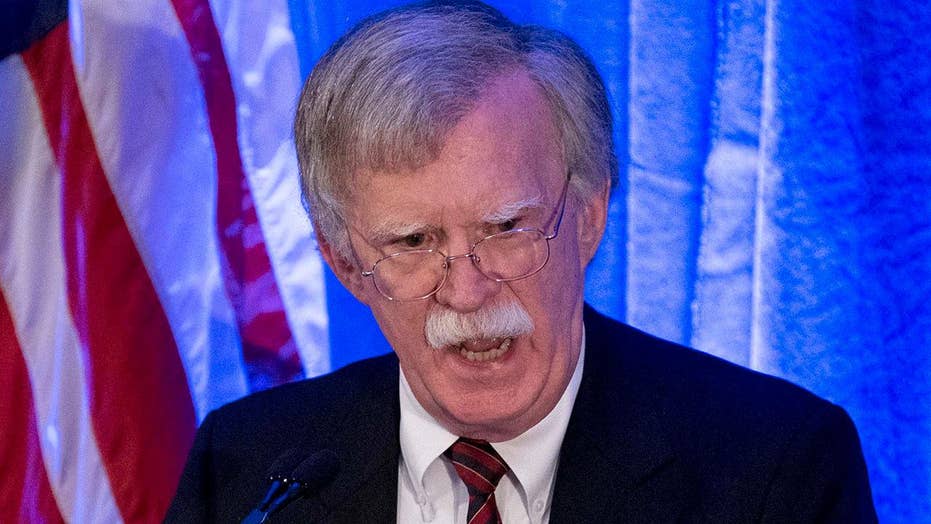 Bolton announces the US will not cooperate with the ICC

Trump's national security adviser made it clear the administration is taking sides in the Israeli-Palestinian conflict by threatening to close the Palestine Liberation Office in Washington; Gillian Turner reports on 'Special Report.'

It is an outrage to think that brave American troops defending our security on the battlefield in distant Afghanistan should be second-guessed, investigated and even prosecuted for alleged “war crimes” by an international body with no accountability to the American people.

President Clinton signed the Rome Statute that created the court in 2000, but it was never ratified by the Senate. President George W. Bush implemented workarounds that would protect our men and women in uniform from arbitrary and unaccountable actions by foreign powers.

Nevertheless, President Bush softened his stance to include cooperation with the ICC. This approach was extended by President Obama.

That’s all history now and quite rightly. Bolton said starkly that the International Criminal Court is “already dead to us” and that the United States would not just refuse to cooperate with the court in any way, but would actively block any efforts the court makes to unjustly prosecute American military heroes.

Bolton made clear that the Trump administration would be prepared to prevent ICC judges and prosecutors from entering the United States, sanction their funds in the U.S. financial system, and even prosecute them in the U.S. criminal justice system.

Good. And not just because this action is right in itself. But because it is a perfect example of a profound shift in foreign policy by the Trump administration, exactly as promised by the president.

When Trump spoke about putting “America First,” it wasn’t just a slogan. It was a strategy and remains so today.

At the same time, “America First” is a resounding rejection of the globalist approach that has dominated foreign policy for far too long. No wonder the elitists hate it! For years they have – sometimes subtly, sometimes directly – worked to subjugate the nation-state and elevate some vague notion of the “global interest.” This highlights one of the deepest distinctions between elitism and populism.

The nation-state is an indispensable part of our social fabric, and a key component of our conception of the populist society. This is not for the kind of tribal, nationalistic reasons that elitist critics of populism like to claim.

The nation-state is indispensable to our social fabric because it’s where we resolve our inevitable differences, legitimately and democratically. A country can do that in a way that an international multilateral organization can never accomplish. America’s motto is E Pluribus Unum – not E Pluribus U.N.

The elites in the media and the Ivory Tower would have us believe that allegiance to a nation- state necessarily means being bigoted and xenophobic. That’s why they keep talking about nationalism as a threat to be resisted.

But the elites have never explained the basis on which any national leader could possibly be justified in doing anything other than putting his or her own nation’s and people’s interests first. Is that nationalism? Or simply a functioning democracy?

The globalist demand is for national leaders to demote the interests of their country and their people in pursuit of ... what? The global interest? Who decides what that is? Oh wait – the globalists do. You might call that oligarchy and you’d be right.

Positive populists embrace a patriotism that celebrates their own country and harnesses its power for positive ends. Yes, these ends should primarily benefit people at home, but they’re not motivated in the slightest degree by a desire to disadvantage people elsewhere.

You needn’t put down other countries to put yours ahead. Citizenship means something. It’s the pinnacle of an intricately designed system of governance that the framers of the Constitution ensured means more to American citizens than most.

American patriotism is a positive and inimitable phenomenon. But it’s not just the flag. It’s not just the anthem. It requires sovereignty and accountability for citizens. And it requires the rejection of any argument or ideology that would place power in the hands of any organization or group – such as the International Criminal Court – that American citizens cannot control with their votes.

The consolidation of the global economy in the past few decades has partly driven this consolidation in governance. After all, nation-states are an inconvenience to the global corporations that crave a world where they can operate everywhere without constraints.

But nobody ever cast a vote for Goldman Sachs or Google. We need to take power out of the hands of the arrogant and unaccountable globalist elite and put it back in the hands of the people, in the form of democratic nation-states.

International bodies like the ICC cannot, by definition, be democratic. As Roger Scruton wrote: “Democratic politics requires a demos. Democracy means rule by the people and requires us to know who the people are, what unites them and how they can form a government.”

The globalist manifesto argues that our nation’s affairs should be governed by multilateral institutions – that the edicts of bodies like the World Trade Organization, European Union, International Monetary Fund and World Bank should have primacy over national bodies like democratically elected governments.

And therein lies globalism’s fatal flaw: It is not democratic. Even if we concede the wisdom of global bureaucrats, it is clear that they are not accountable to people. They have their own agenda and by centralizing decision-making, they give themselves the power to implement that agenda free of any democratic checks or balances. On those grounds alone globalism is unacceptable, even if it delivers positive outcomes.

But something that for centuries was a natural and organic expression of human curiosity and ingenuity has more recently become fetishized as an absolute and mechanistic end in itself. Our ruling elites have subjugated the notion of nationhood to globalism, something they see as more righteous and noble.

The positive populist doesn't begrudge international cooperation – even multilateral cooperation. But if the system is ever to be accountable, it needs to be dismantled and replaced with case-by-case alliances between sovereign states.

The positive populist understands that America needs to look out for its own interests. So does every other country. Nation-states should cooperate when they determine that it’s the right thing to do – not because some bureaucracy requires it.

Countries can and should work together to make important strategic and policy decisions. But instead of doing it at absurd summits run by bureaucrats, leaders should meet according to their rules, not someone else’s.

When two countries have a dispute between them, they should determine how it is mediated, and no one else. The globalist bureaucracies created in the wake of the Second World War served a purpose at one time, helping a whole generation of leaders to formalize relationships on defense, trade and foreign policy. But we no longer need the heavy hand of these organizations to guide us.

We know our interests and understand our relationships. Where alliances like NATO have served us well we’ll push forward. But there’s no need to perpetuate bureaucracies that have acquired their own agendas and their own leaders who act as if they are the ones chosen by the voters.