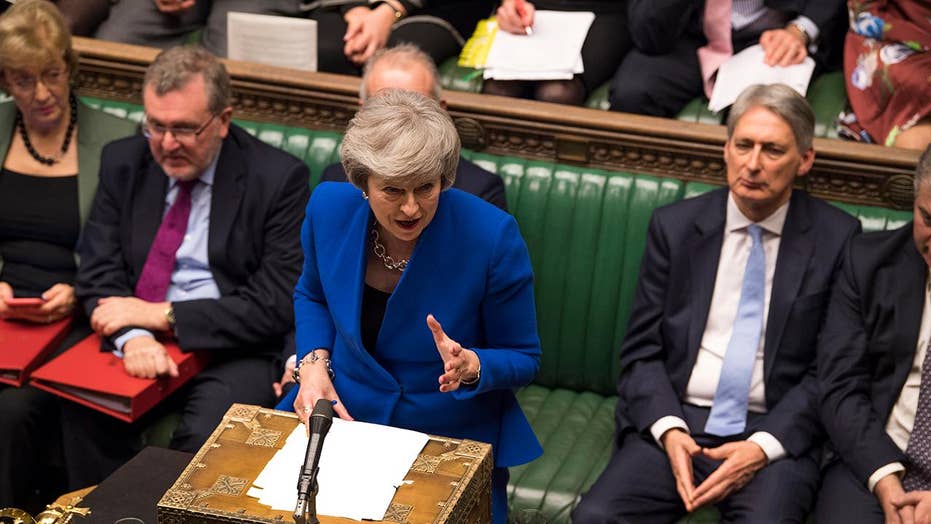 Steve Hilton says that no one should be upset that her deal failed because it would have still kept Britain in the European Union.

“Consider the possibility we are led by idiots.”

Those words, on a sticker given to me by Ben Domenech, founder of The Federalist, grace the front of the laptop on which I’m typing this. Let’s be honest: When it comes to Brexit and the leadership of the UK over the past few years, it’s not a “possibility” but a certainty.

Yesterday’s historic rejection of Theresa May’s Brexit agreement, the worst parliamentary defeat for a UK government in a century, is just the latest humiliation for a feckless British ruling class that appears to have suffered some kind of collective nervous breakdown since the country voted to leave the EU in June 2016.

Now Americans are asking: How the hell did the Brits end up in this mess, and what is the way out?

Before answering those questions it’s worth restating the point of it all in the first place. Let’s remind ourselves of the noble rationale for Brexit, an argument that is increasingly lost in the breathless reporting of the shambolic implementation process.

The reason that a majority of Britons voted to leave the EU was the simple and reasonable demand that the decisions that govern their lives be made by representatives they can vote for or against in elections.

Brexit was, at its heart, about democracy and sovereignty.

Remember, the EU is not some kind of European version of NAFTA. It is the equivalent of a Federal Government for Europe, with two key differences.

First, the EU is actually more centralizing and intrusive with respect to its member states than the Federal Government is to the individual states of the U.S. I have seen this first hand - whether in my former role as senior advisor in 10 Downing Street or starting a business here in America. Believe me, however annoying you may think the feds are here, they’ve got nothing on the Brussels bureaucrats who run the EU.

Believe me, however annoying you may think the feds are here, they’ve got nothing on the Brussels bureaucrats who run the EU.

And that takes us to the second big difference: accountability. However much Americans may hate the over-centralization of power in Washington, at least Congress is elected. At least the President is elected. The EU’s policy-making body, the European Commission, is appointed. Unelected bureaucrats drive the EU agenda.

So how did that simple and uplifting idea, asserting a desire for sovereignty and democratic accountability, turn into the unremitting incompetence and division of the past two-and-a-half years?

It started with then-Prime Minister David Cameron’s impetuous decision to resign immediately, in the early hours after the Brexit vote. He was reported to have told aides “why should I stay around to deal with all the hard s**t?”

By flouncing out in such a peremptory fashion, he left the ruling Conservative Party to elect a new leader practically overnight. There was no “transition,” no time to reflect. A sleep-deprived and shell-shocked party stumbled immediately into a contest for which no-one was properly prepared.

The outcome was both farce and disaster. Thanks to the bizarre antics of Cabinet Minister Michael Gove (who at the urging of another member of parliament, Nicholas Boles, stabbed the leading pro-Brexit candidate, Boris Johnson, in the back), the eventual winner was the lackluster and uninspiring Theresa May - who had campaigned against Brexit!

Yet she was now the person responsible for implementing it.

Her first mistake, in an effort to reassure skeptical Brexit voters that she could be trusted to deliver the outcome they had voted for, was to set in motion the timetable for departure from the EU without any idea how it was to be achieved.

On top of that, she conducted negotiations in an amateurish way, seeming at once underprepared and over-secretive.

But by far the biggest failing was her overall mindset and approach. Almost the entire British establishment - in politics, the bureaucracy, the media and business - was against Brexit and saw the vote to leave as a national disaster; something to be managed and mitigated, rather than an opportunity to be seized.

This risk-averse and negative mindset infected the British government’s approach. It sought assurances from the EU that economic ties wouldn’t be disrupted. It tried to negotiate what became known as a ‘soft Brexit’ - one that would loosen the EU’s grip on the UK rather than remove it.

The EU, of course, relished and exploited this approach. Once May indicated that she wanted Brexit to be delivered through a negotiated ‘deal,’ the EU had the upper hand. Its obvious incentive was to make the exit process as painful as possible for the UK, in order to deter other member states from leaving.

In the midst of all this, hubristically believing the blandishments of her advisors that she would easily defeat the newly-installed far-left leader of the opposition Labour Party, Jeremy Corbyn, May called an impromptu general election - and lost her parliamentary majority thanks to her catastrophically poor campaigning. This further weakened her negotiating position with the EU.

Eventually, she published last summer her proposed withdrawal agreement - a plan which was instantly rejected by Brussels for asking too much and by Brexit supporters in Britain for asking too little.

This all culminated in the deal which was defeated in the House of Commons yesterday.

But Brexit-supporting observers should shed no tears for its demise. May’s deal did not, as the prime minister claimed, with outrageous deceit, “deliver” Brexit and put an end to uncertainty. Quite the contrary.

May’s deal offered only a two-year transition period - with a multi-billion-pound price tag attached - that would essentially keep the UK subject to key aspects of EU law, prevent the UK striking independent trade deals, and defer the big decisions about the future relationship with the EU to a further round of negotiations.

Her ‘Brexit deal’ was no such thing: it was not really a deal and it didn’t deliver Brexit.

The key dynamic in this whole process - and the factor that will determine its outcome - is a familiar one to us here in America: the split between the people and the establishment; between populism and elitism.

The British people voted to leave the EU. But a majority of the members of parliament want to stay.

Despite a clear promise that voters would have the final say over Brexit, despite the British parliament explicitly relinquishing control over the process when it passed the legislation authorizing the Brexit referendum in the first place - parliament is now actively working to...well, ‘take back control.’

Regardless of who is prime minister - whether it’s May, another Conservative or even Labour’s Jeremy Corbyn - there is no majority in parliament for any particular version of Brexit. But there is a majority, which includes representatives from both main parties, to stay in the EU. And so we can expect a group of legislators to try and delay, and then overturn Brexit.

The fact remains, however, that by law Britain will leave the EU on March 29, with or without a deal, unless parliament legislates otherwise.

And therein lies the reason we might still retain some optimism about all this - although you would never think it from the establishment groupthink currently pervading the UK, and now infecting the US establishment too.

This baleful consensus has it that a ‘No Deal’ Brexit would be a calamity of Biblical proportions, with food running out, medicine supplies drying up, trucks blocking the roads and planes falling out of the sky.

In truth, thanks to the evident intention of the EU to make a negotiated withdrawal as damaging as possible, a No Deal Brexit is now the only realistic way to achieve Brexit.

But why should this be something to fear? It would leave the UK in control of its own policies on trade and transportation. Why on earth would a British government choose to block imports of necessary food or medicine? Why would it choose to stop trucks and planes?

The entire debate around a ‘No Deal’ Brexit assigns a vastly overstated importance to the role of government in daily life. In the end, food gets to stores, medicines to doctors, trucks to their destinations and planes to airports not because the government tells them to but because of the millions of interactions and exchanges between people and businesses and other institutions that collectively comprise a market economy and a free society. Most countries in the world are not in the EU. I think Britain, the world’s fifth largest economy, can cope with life outside.

Of course, it would be wrong to pretend that there would be no disruption associated with a No Deal Brexit. But again, the response to this would be in Britain’s control.

As I have consistently argued, leaving the EU needs to be accompanied by a strong set of pro-enterprise policies to counteract any disruption: cut corporate taxes to make the UK an attractive destination for business and investment. Set out plans to give Britain the world’s best-trained workforce and most modern infrastructure.

The chaos and confusion of the Brexit process is the inevitable outcome of it being placed (more by accident than design) in the hands of lackluster leaders who never believed in it in the first place.

But it’s not too late. With the right leadership and the right attitude, Britain still has the chance to take back control over its own destiny, forge new partnerships with the world beyond Europe - especially the United States - and turn Brexit into the positive opportunity so many are hoping it will be.