Steve says the real problem is when America's elected president is no longer supervised by the unelected ruling establishment.

The new year began as the old year ended - with the establishment up in arms over generals leaving the Trump administration. How would the world survive the departures of John Kelly and James Mattis?

"Today has just been a cascade of what would be generally seen as absolutely apocalyptic news in any other presidency…Let's start tonight with the resignation of the Secretary of Defense James Mattis," Rachel Maddow lamented.

"Apocalyptic." Forget about war or disease or poverty. The apocalypse is when America's elected president is no longer supervised by the unelected ruling establishment. They even gave it a name -  the "Committee to Save America." It included not just the military's Mattis and Kelly, but Exxon's Rex Tillerson and Goldman Sachs' Gary Cohn.

On trade, Trump promised to "renegotiate NAFTA or withdraw from the deal to get a much better one for our workers and our companies.” He also said, "fixing our trade deals will be the foundation of our economic revival.” This is what Americans voted for.

But, as reported by Bob Woodward, James Mattis -- yes, Trump's own defense secretary -- plotted to block the president's trade policy. Woowdward wrote: “Mattis and Cohn agreed. Together they would fight Trump on this...They met for lunch at the Pentagon to develop an action plan...One cause of the problem was the president’s fervent belief that annual trade deficits of about $500 billion harmed the American economy. He was on a crusade to impose tariffs and quotas despite Cohn's best efforts to educate him about the benefits of free trade. How could they convince, and in their frank view, educate the president?"

"Educate" the president. Right. Because if you have a policy opinion that's different from the ruling establishment's, you must be stupid. Therefore, you must be "educated." You must be educated about ... immigration.

As we know, Americans voted for border security, including a wall. Well, not if the Committee to Save America had anything to do with it.

Former White House Chief of Staff John Kelly boasted to Democrat lawmakers last year that Donald Trump had not been "fully informed" when he promised a border wall and that the president had "evolved" on the issue after being educated by Kelly. He confirmed this to Fox News' anchor Bret Baier in an interview.

“He’s very definitely changed his attitude towards the DACA issue and even the wall, once we briefed him," he said.

What is it with these generals? Imagine their reaction if someone under their command behaved like they did with President Trump. This is not about having yes men around. In business, there's a saying: "Disagree and commit." It means that everyone should speak up before a decision is made. But once the boss has decided, you all get behind it to make it happen.

On military engagement overseas, Trump promised Americans the following: "I will never send our finest into battle unless necessary, and I mean absolutely necessary. And will only do so if we have a plan for victory with a capital  'V' ... We’re getting out of the nation-building business and instead focusing on creating stability in the world. Our moments of greatest strength came when politics ended at the water’s edge ... Unlike other candidates for the presidency, war and aggression will not be my first instinct. You cannot have a foreign policy without diplomacy. A superpower understands that caution and restraint are really truly signs of strength."

But James Mattis and the Committee to Save America weren't going to let something as foolish as an election result get in their way. Are you kidding? The ruling establishment's foreign policy must continue. At all times. Regardless of elections. You can't let the people interfere in foreign policy. That would be -- what was Rachel Maddow's word -- "apocalyptic"!

So, when President Trump demanded policy options on Afghanistan, Syria, and Iraq that would deliver what the American people voted for, Mattis plotted to block him and to force the continuation of the establishment approach. Again, according to Bob Woodward, even former national security adviser H.R. McMaster “said that he believed Mattis and Tillerson had concluded that the president and the White House were crazy. As a result, they sought to implement and even formulate policy on their own without interference or involvement from McMaster, let alone the president.”

And now, unbelievably, the same people who criticized America's endless foreign wars attacked President Trump for trying to get out of them. Back in 2012, Rachel Maddow said, "We’ve been at war so much that we don’t think of ourselves as being at war anymore. Being at war is the new normal for America. It should not be like that.”

Exactly, Rachel! So, why on earth are you now lamenting the departure of James Mattis? You should be cheering it as a victory for democratic, civilian control of the military and the kind of foreign policy you actually support.

For years we've had leaders who promised to end America's costly wars, only to cave in to the establishment view. I've seen young leaders with no military background get into office and be completely rolled by impressive-looking generals with gravelly voices and gold braid all over their chests. Barack Obama was one of those leaders.

"Our troops have done all we have asked them to do and more," then-Sen. Obama once said. "But no amount of American soldiers can solve the political differences at the heart of somebody else's civil war, nor settle the grievances in the hearts of the combatants. It is my firm belief that the responsible course of action for the United States, for Iraq and for our troops, is to oppose this reckless escalation and to pursue a new policy."

So how did that guy turn into this guy?

"As commander-in-chief, I have determined that it is in our vital national interest to send an additional 30,000 troops to Afghanistan," President Obama said. "Just as I approved additional support for Iraqi forces against Isil, I've decided to increase U.S. support for local forces fighting ISIL in Syria.”

You know the reason for the change: Obama's generals rolled him. Well, Trump turned out to be different. He finally stood up to the generals, and rightly so.

Mattis and Kelly may have been heroes in combat - I don't know, I'm not a military man and can't judge. But I do know something about civilian government, and the way they behaved was not just disgraceful, but frightening. They tried to impose their military views, even after they'd been rejected by civilian leadership. They were self-righteous, subversive and disloyal. Oh, and swampy at the same time.

After leaving the Army, Mattis was paid $242,000 and up to $500,000 in vested stock options by the company General Dynamics, which builds tanks submarines and munitions. He also received a $20,000 speaking fee from defense giant Northrop Grumman. John Kelly was paid $166,000 as an adviser to DynCorp, a company that gets 96 percent of its revenue from government contracts. 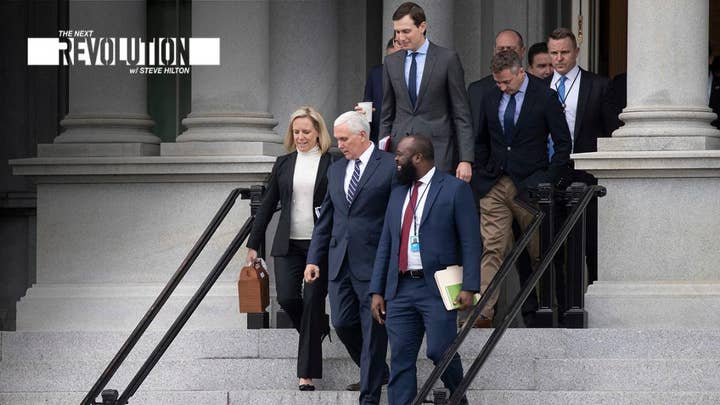 These ex-generals, along with the other former and current establishment stooges in the Trump administration, just love telling their pals in the press -- off the record, of course -- about their noble role saving America from disaster by controlling a crazy president. Well, if they have evidence that the president of the United States is mentally ill, or unfit to carry out his duties, then it is their patriotic duty to make that evidence public.

James Mattis, John Kelly, Rex Tillerson, Gary Cohn and all the rest of you in the self-regarding and self-aggrandizing Committee to Save America -- come on, then. Tell us. Tell us now, or we'll have to conclude that your real problem is with President Trump's policies -- policies which aim to overturn a half-century of your elitist ideological orthodoxy and which the American people explicitly voted for in an election.

It is the establishment's efforts to block those policies that truly undermine democratic norms and represent a threat to our Constitutional republic and the rule of law.

Adapted from Steve Hilton's monologue from "The Next Revolution" from January 6, 2019.