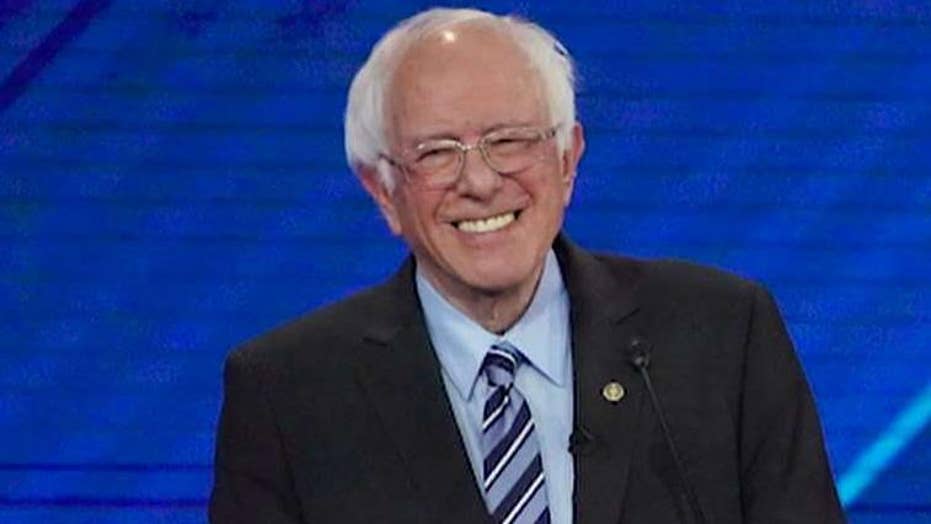 Does Bernie Sanders have a serious chance to win the 2020 nomination?

Like swallows returning to Capistrano, socialism makes an appearance on a regular cycle.

The current presidential campaign features self-confessed socialist Bernie Sanders, I-Vt., and Sen. Elizabeth Warren, D-Mass., who doesn’t self-describe as a socialist, but whose policies closely resemble those of Sanders.

Sanders has the luxury of condemning millionaires and billionaires from his comfortable life as a multi-millionaire. As Forbes magazine has reported, “Sanders … has amassed an estimated $2.5 million fortune from real estate, investments, government pensions — and earnings from three books.” Sanders is also quoted, “I wrote a bestselling book. If you write a bestselling book, you can be a millionaire, too.”

SANDERS REJECTS BIDEN'S OPENNESS TO BIPARTISAN TICKET: 'I WILL NOT HAVE A REPUBLICAN AS A VICE PRESIDENT'

Sanders appears to favor capitalism for himself, but he’s against it for everyone else.

Socialism is a false doctrine. It sells itself to new generations who know little about it. They promote it by promising “free stuff,” along with envy of the successful.

Why does socialism continue to have appeal in America? Part of the reason is adherents claim it is fairer than capitalism. It isn’t fair, socialists say, that some people make more money than others.

Socialism and its twin sister liberalism have always been about feelings, rather than outcome.

That so many liberal programs have failed to achieve stated objectives does not matter to the left. Apparently, it is intent, not success, that counts. When liberals or socialists fail, they simply go on to new errors.

Amity Shlaes has written a new book about socialism’s appeal and how on several occasions we have come close to embracing it. It’s called “Great Society: A New History.”

Socialism and its twin sister liberalism have always been about feelings, rather than outcome.

President Lyndon Johnson promised to end poverty in America, but Shlaes writes, “After the 1960s, official poverty stabilized at 10 to 15 percent. In fact, what the War on Poverty and the new flood of benefits DID do was the opposite of prevent — they established a new kind of poverty, a permanent sense of downtroddenness. They washed away hope.”

In another example of the private economy working better than one centered in Washington, she notes that 50 years ago, “McDonald’s employed more young men than the U.S. Army.”

That company, along with others like Starbucks not only need more employees, they offer advancement to management positions and in some cases free college tuition.

These are far better paths to success and independence than government programs, which often sustain people in their poverty — and thus make them more dependent on government and politicians who want their votes.

Just as New Deal programs exceeded their usefulness after the Great Depression (but manage to enjoy a type of eternal life), so, too, have the Great Society programs. Why don’t people know this? “Nothing is new, it is just forgotten,” goes the adage.

Shlaes writes: “The public didn’t understand that the freedom of markets was necessary to make companies like (General Electric) grow. America was, through its own social welfare measures, gradually heading toward socialism, and Americans didn’t even know it.” She adds, “Just as the 1960s forgot the failures of the 1930s, we today forget the failures of the 1960s. Part of the trouble is what schoolbooks and history books omit.”

As with much of the media, bias is not only expressed in how and what is covered, but even more in what is omitted.

Count on modern history textbooks to recall America’s “original sin,” slavery, a stain that can never be allowed to go away, rather than the much-improved lives and jobs experienced by contemporary African-Americans.

If neither Sanders nor Warren become president, that won’t mean socialism will have lost. There’s another generation not yet born that could likely be seduced by it.