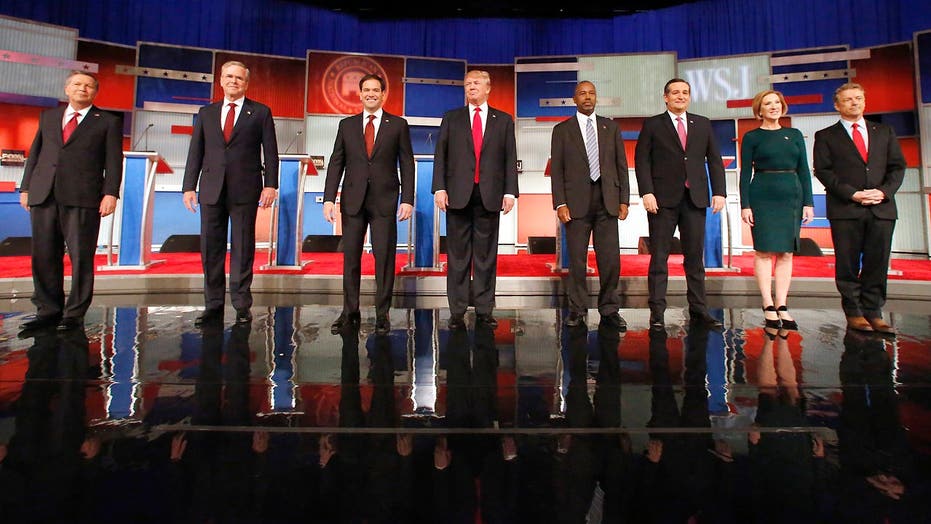 Panelists break down the candidates' performances

Well, if CNBC got an F then Fox Business News gets an A. The winners of Tuesday night's GOP debate in Milwaukee were the audience and the Republican party. This wasn't just a debate. It was a tutorial on growth, taxes, health care, trade, regulation, and the Fed.

1. Every candidate argued for lower tax rates and closing loopholes and simplification. What a contrast with the Hillary Clinton and Bernie Sanders.

Rubio was the outlier. He argued for a tax credit as a way to help families.  ‎He calls this a pro-family tax cut, but it doesn't help the economy. Rand Paul zinged him with the argument that his refundable credit is a $1 trillion entitlement program.

2. Sparks flew the most on issues of foreign policy, immigration, and trade. Trump got smacked down on immigration when he called for a deportation of 11 million people. Bush, Kasich, Rubio, and Fiorina were for an aggressive, interventionist foreign policy with more military spending.  Trump and Paul argued for a hands off policy.

Conservatives have to decide whether America should be the world's policeman.

3. Republicans muffed the issue of bank bailouts. Bush, Kasich and Cruz all seemed to endorse  taxpayer bailouts if we have another financial crisis. This is a big problem for the GOP.  Why is it so hard to say: If I am president I will never bail-out a private company.

4. Trump is still the celebrity rock star candidate and had throngs of fans following him everywhere he went.

5.  All the candidates need to smile more and start to use humor more when they speak (like Reagan) rather than standing on stage looking like androids.

6.  One other observation that TV audiences couldn't see: Bush and Rubio were standing next to each other but these old friends hardly exchanged a word and turned their back on each other during the breaks. They are adversaries now. You can expect the nuclear ad wars to begin.

Here are some brief comments on each candidate’s performance Tuesday night:

Trump.  His first answer was a huge downer: He said that "wages are too high"‎ and that that costs jobs. Yikes! We can't have a GOP that is for LOWER wages. He argued against the free trade deal with Asia.  His best line: Every Republican has a tax plan better than Hillary's.

Carson. His best line was that the media accuses him of lying but it was Hillary who told her family one thing about the Bengazi attack and the public another. What about that lie? He still rambles too much and had a bad night.

Rubio. The Florida senator had the best line of the night: "Welders make more money than philosophers." He argued for raising wages through growth. ‎ He sounded a little wonkish, but had no gaffes. He also had the biggest cheers from the crowd.

Kasich.  ‎He referred to tax cuts as tax schemes. He defended bailouts. He got booed.  His best line was balance the budget by cutting taxes.

Cruz. The Texas senator gave a spirited defense of his tax cut plan. He argued that immigrants are driving down wages (sic). He argued for taking away power from the Federal Reserve.  He needs to stop grimacing when he talks.

Bush. The former Florida governor gave his strongest performance yet. He endorsed repealing every Obama rule. He defended his brother's actions in Iraq. Best line: when Trump talks about deportation there are high fives in the Clinton campaign.

Fiorina. She argued for zero-based budgeting. The former CEO said that immigrants helped build Silicon Valley. And she made a passionate case for the free market in health care as "a cancer survivor."

Paul. The Kentucky senator was the one candidate who talked about how to cut spending and shrink the government. Had a great line when he was asked if Hillary is right that the economy does better under Democrats: "Inequality is worst wherever Democrats are in charge,” he said. If you want more economic growth move to “a state with a Republican governor  and city with a Republican mayor."

On the under card:

Santorum’s best line: "Family break up is the biggest cause of poverty." Marriage is the best economic stimulus. Downer of the night: Santorum says "I'm the only candidate who supports the export import bank." Thank God.

Huckabee. He stressed the national sales tax/fair tax. Let every worker keep their whole paycheck and "my plan is the only tax reform that doesn't just reduce the IRS, I shut it down."

Christie. The New Jersey took it to Hillary and was relentless. It was the old tough as nails Christie we all fell in love with six years ago.  His best line "I won't just debate Hillary, I will prosecute her." Also, he gave a great defense of the police against the hoodlums.

Jindal. His strategy was to tear down Huckabee and Christie (for not cutting enough government spending). The attacks seemed to backfire.

Best performers of the night in order: ‎Christie, Fiorina, Paul, Bush and Rubio.

Bush lives to fight another day and Christie may rise to the top tier next time if anyone was watching the first debate.