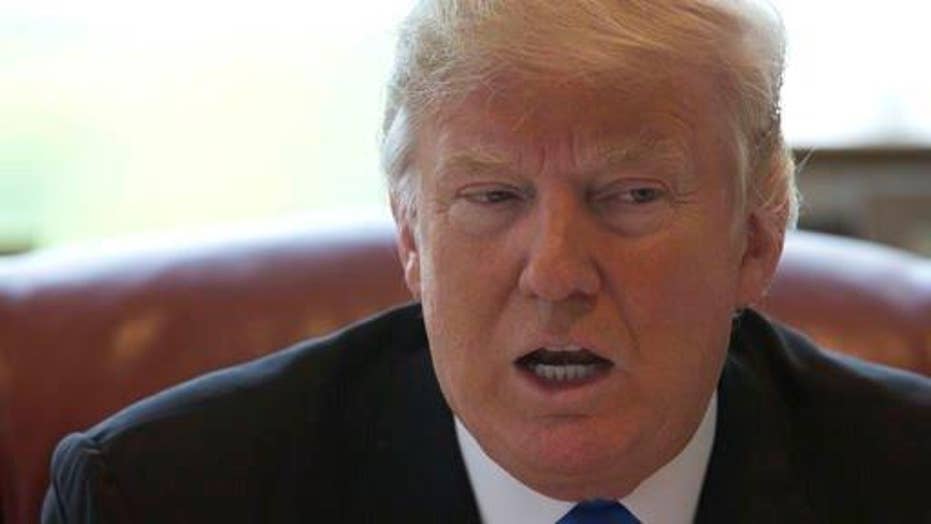 For many Christians – Donald Trump is like a bucket of store-bought chicken at a Wednesday night church supper. It may be a culinary heresy – but folks will still eat it.

That’s the best case scenario for the Trump campaign as they try to woo wary Evangelical Christians. Many are still not convinced that the man who has had more wives than there are letters to the Corinthians shares their view from the pew.

It’s not just the #NeverTrump crowd that is causing the campaign to worry. It’s the unknown number of Evangelicals who may stay home on Election Day.

A popular quote by the renowned pastor Charles Haddon Spurgeon has been trending on social networking websites.

“Of two evils choose none,” Spurgeon once said.

But is that really our best and only option – to throw in the towel? Do Christians get to claim the moral high ground by electing President Hillary Clinton?

“The idea of not voting – you’re sacrificing your Christian worldview on the altar of political expediency,” said Samuel Rodriguez, president of the National Hispanic Christian Leadership Conference. “It is silly to talk about not voting for either candidate. Every single Christian should vote.”

Franklin Graham, the president of the Billy Graham Evangelistic Association, said Christians need to take a stand in 2016.

“You don’t just stay home and not vote – you vote,” Graham told me. “Vote for the candidates that best support Biblical truth and Biblical values.”

But what if your candidate is not exactly an altar boy in good standing?

“In some races, it may not always be clear,” Graham said. “You may have to hold your nose and choose of the two.”

So what are Lutheran church ladies and Baptist deacons and Church of God Sunday school teachers supposed to do? Should Christians vote for Donald Trump?

I decided to assemble an all-star panel to address that question. I reached out to Franklin Graham, Samuel Rodriguez, former Arkansas Gov. Mike Huckabee and Richard Land, president of Southern Evangelical Seminary.

Land told me he plans to “vote against Hillary Clinton and I don’t believe in third party candidates.”

“I’m perturbed – deeply perturbed that  I’m presented with such a lousy choice but that’s who the American people have selected,” he told me. “I suspect I am not alone among my fellow Americans in saying that I will cast my vote with no joy.”

But that’s the key – actually voting on Election Day.

Rodriquez conceded that the 2016 candidates are not his “dream team” – but he’s only concerned about one issue – the Supreme Court.

“I’m going to vote for protecting the Supreme Court from judges that are activists – that run counter to our Judeo-Christian value system.”

Huckabee, who was a preacher before he was a politician, has been a supporter of Trump. And he’s also been mentioned as a possible vice presidential running mate.

He told me Christians can and should vote for Trump.

“I’m not going to try and suggest that Donald Trump is in any way the reincarnation of the Apostle Paul,” Huckabee said. “But he’s been very open to not only dialogue with – but listen to and understand where many people in the faith community are coming from.”

He predicted Trump, if elected, would have a very strong relationship with Evangelicals.

“Donald Trump could well be a great president for those of us who are Evangelicals,” Huckabee told me.

Besides, Huckabee pointed out, the Republicans have nominated people who are far more contemptuous of the Evangelical community.

Anybody remember Sen. John McCain’s infamous “agents of intolerance” rhetoric?  In 2000, McCain said parts of the religious right were divisive and even un-American – in reporting by The New York Times.

So what’s a good Christian to do?

He’s been leading prayer gatherings outside capitol buildings in all 50 states. Tens of thousands of Americans have attended the “Decision America” events.

“”We aren’t supporting political candidates,” he said. “I’m encouraging Christians to vote. The problem in our country today is that we have allowed the progressive to take God out of our government. We have allowed godless secularism to take control of Washington.”

Land suggested Trump could win over Evangelicals by offering a few olive branches – like naming Sen. Ted Cruz as his pick to the Supreme Court.

“That would help pro-lifers a lot,” Land told me. “Ted would be easy to confirm, too. A lot of senators would vote for him just to get him out of the Senate. Mitch McConnell might lead the fight.”

“If he picked an Evangelical as his running mate – that would help, too,” he added.

To be honest, though, Donald Trump could walk the aisle at a Billy Graham Crusade, while waving a King James Bible and singing “Amazing Grace” and it still wouldn’t be enough to convince the holier-than-thou club.

And for all you folks quoting Spurgeon – I would offer this rebuttal: not to vote is to vote.