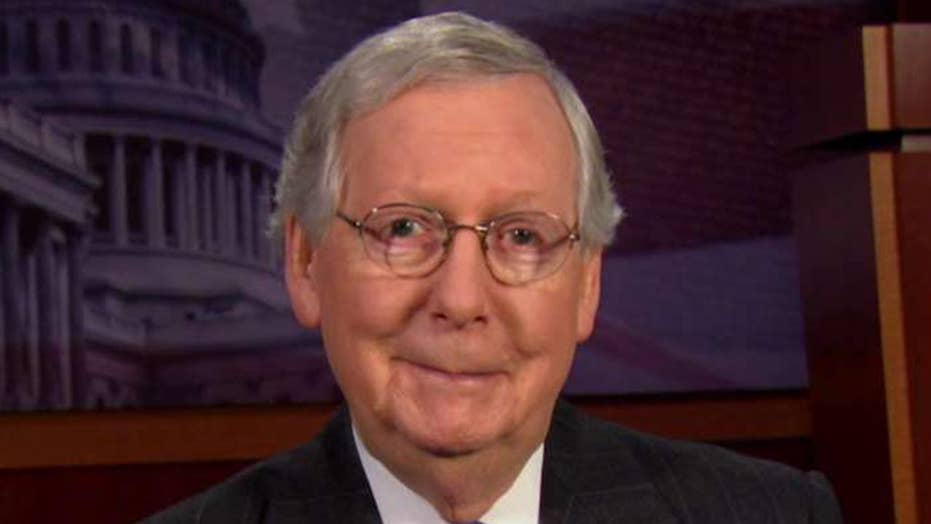 McConnell on how the new Senate will move forward

Senate Majority Leader says there has always been a tilt against Republicans by the media. On 'The Daily Briefing,' McConnell says ObamaCare is not working well and explains how voting against Kavanaugh was a mistake for Senate Democrats.

Last Tuesday I was proud to see that the American people voted keep Republicans in control of the U.S. Senate. But we also learned that, come January, the Republican Senate majority will be dealing with a House of Representatives under Democratic control.

Needless to say, the past two years of unified Republican government will be remembered as a period of historic productivity.

Both houses of Congress have taken swift action to right-size a bloated federal regulatory state. The Senate has shattered records in confirming the president’s well-qualified judicial nominees, including two outstanding jurists to serve on the Supreme Court

And together, we passed the first comprehensive reform of the nation’s tax code in a generation. Already, Americans’ paychecks are growing, consumer confidence is high and unemployment has reached a near 50-year low.

After this prolific run, I was not surprised to be asked over the past week about just how much the American people can expect from the next Congress under divided leadership. What can we realistically accomplish?

I have good news: reports of the death of bipartisanship in Washington have been wildly exaggerated. In fact, some of the most significant accomplishments of this Congress have been delivered with overwhelmingly bipartisan support.

Under bipartisan committee leadership, we took major steps toward restoring regular order to our appropriations process. The Senate passed more funding measures before the beginning of this fiscal year than at any point in the last two decades.

The measures included the largest year-on-year increase in defense funding in 15 years, which put an end to the Obama-era atrophy of our armed forces.

Working closely with counterparts in the House, we found common ground on rebuilding America’s crumbling infrastructure. In fact, America’s Water Infrastructure Act – designed to improve interstate commerce, water quality and flood safety – passed the Senate by a vote of 99-1.

And in August, the Senate voted unanimously to expand Americans’ opportunities to receive technical and career-focused education.

We’ve passed 22 pieces of legislation produced by the bipartisan work of the Veterans’ Affairs Committee. From improving the efficiency of Department of Veterans Affairs medical facilities to enhancing access to post-9/11 GI Bill educational benefits, each of these pieces of legislation was designed to help America keep its promises to returning heroes and their families.

And last month, the Senate passed a landmark package of targeted resources to combat the opioid epidemic. The legislation was produced by five bipartisan committees and included direct input from 72 different senators.

Of course, these are just a few highlights of a Congress that has conducted as much serious, cooperative work as any in recent history.

So make no mistake. The Senate has proven its ability to reach bipartisan solutions to some of the most pressing challenges facing our nation.

And looking ahead to the coming year, there will be no shortage of opportunities to continue this impressive record of cooperation across the aisle and across the Capitol.

What we can make of those opportunities will depend on our Democratic colleagues. Will they choose to go it alone and simply make political points? Or will they choose to work together and actually make a difference?

Last week, the American people made it abundantly clear that they prefer that Congress focus on making a difference.

That message may have been lost on a few House Democrats, who have made clear their preference for investigations over policy results. After years of rhetoric, it’s hardly news that some are more interested in fanning the flames of division than reaching across the aisle.

But however Democrats interpret the latest message from voters, Senate Republicans will continue our commitment to delivering results.

Most importantly, in the face of whichever tactics the far left chooses to employ next, we’ll continue to stand for the rule of law. We’ll continue to confirm more well-qualified nominees to serve on our nation’s courts.

This is what the Senate’s Republican majority was elected to do. And we’ll continue to get it done.