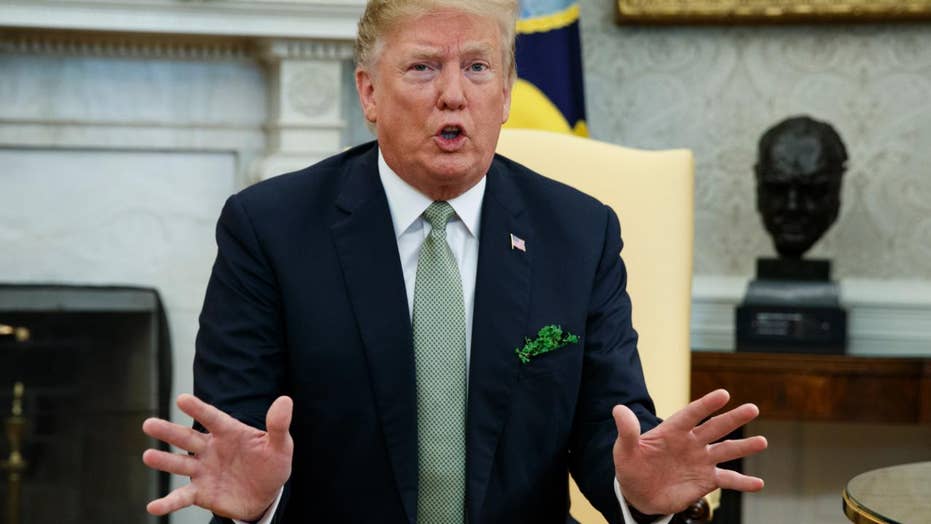 Trump calls out Facebook, Google and Twitter for being ‘on the side of the Radical Left Democrats.’

It’s not every day that Tucker Carlson and Sen. Elizabeth Warren, D-Mass., agree on something. But for very different reasons these two stars of the right and left respectively both want to use antitrust law to take the tech giants of Silicon Valley down a notch.

Carlson makes a case that certain tech platforms – particularly Facebook, Google and Twitter – discriminate against conservative speech, and many Republican members of Congress seem to agree with him.

Sen. Warren recently called for the outright breakup of the nation’s most prominent tech companies (including Amazon, Apple, Google and Facebook), and she’s finding support among other Democrats.

TRUMP SLAMS FACEBOOK, GOOGLE, TWITTER, SAYS TECH GIANTS ARE 'ON THE SIDE OF THE RADICAL LEFT DEMOCRATS'

And politicians from both parties are alarmed by the scope of information these firms collect and monetize.

I share many of these concerns. Silicon Valley’s efforts to stifle conservative speech are troubling, reflect a lack of tolerance for dissenting viewpoints, and contribute to our increasingly balkanized political culture.

I am particularly concerned by the disconnect between what consumers are supposedly getting for “free” in the digital economy and what they are actually paying in terms of the information gathered about them. Although tech companies claim they are upfront with consumers about what information is collected and how it is monetized, the shock of how these companies actually manage (and mismanage) this data suggests they are not being fully forthright. As we have seen, this is an area ripe for abuse.

Nevertheless, many of the calls to use antitrust law to address these issues are misplaced, and I’m worried that, in the rush to address our collective concerns about tech, we risk undermining the soundness and impartiality of antitrust enforcement.

Some of the calls to use antitrust against tech companies reflect a “big is bad” mentality. This misunderstands the point of antitrust law. It is not just a handy public policy to soothe the public’s discomfort with bigness. It is about policing inappropriate exercises or accumulation of market power.

This is a highly fact-specific inquiry, not something that lends itself to easy generalizations or blanket condemnations. Unfortunately, much of the public discourse on antitrust is rife with oversimplifications.

Responsible antitrust enforcement requires rigorous economic analysis of the available evidence, with the goal of protecting competition so that consumers benefit. It requires that we specifically identify where conduct is harming the competitive process, and thus hurting consumers.

If we are unable to characterize harm in this manner, then we should look to other tools, including consumer protection actions at the Federal Trade Commission or federal legislation, to address our concerns about certain practices in tech.

Trying to shoehorn antitrust to address some of these problems invites mischief. That is because behind calls to break up the tech giants is a movement that seeks to jettison our evidence-based focus on protecting competition, and in its place adopt antitrust enforcement measures that achieve conflicting and conspicuously political objectives.

Embracing such an approach would not only hurt economic growth and harm consumers, but would politicize antitrust enforcement, making it subject to the whims of unelected bureaucrats and their political sponsors.

If you think the weaponization of antitrust is just a straw man, look at what Sen. Warren is proposing. She wants to appoint regulators committed to reversing allegedly anticompetitive mergers.

Note that she is not proposing that the antitrust agencies conduct an investigation and then take action if warranted. She instead promises to install loyal bureaucrats dedicated to taking specific law enforcement actions before they’ve even examined whether the evidence supports doing so.

The public and their elected officials have good cause to be concerned about certain practices in the tech industry. But, despite these concerns, we should not embrace proposals that would politicize the antitrust agencies and weaponize competition policy.

Antitrust enforcement should serve consumers' interests, not the aesthetic preferences of politicians. We need sound policy, not slogans.