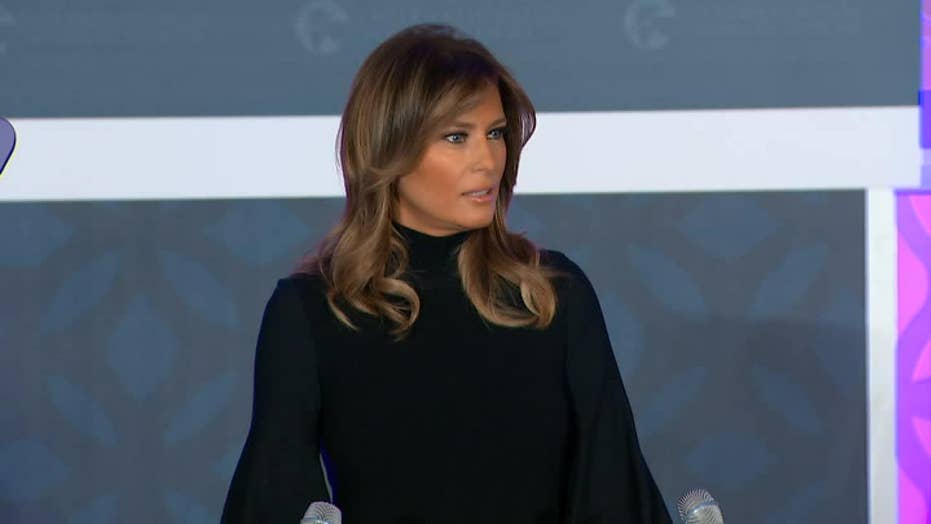 First lady Melania Trump honors recipients at the International Women of Courage Awards and addresses the strength and success of women in America and around the world.

Sunday is International Women’s Day, when we celebrate the women who are leading in their fields and fearlessly pushing past norms and stereotypes to succeed.

We also honor the women who shattered glass ceilings before us – from the Women Air Force Service Pilots (WASPS) who broke ground flying military aircraft during World War II to Arizona’s own Sandra Day O’Connor, the first woman to serve on the Supreme Court.

As the first female fighter pilot to fly in combat, I’m no stranger to bucking norms. During my 26 years in the Air Force, I put my life on the line flying the A-10 Warthog soon after a time when senior military leaders claimed women couldn’t or shouldn’t fly combat jets.

I then put my career on the line and sued the Defense Department for requiring female service members to wear Muslim garb and sit in the backseat of cars in Saudi Arabia. After an eight-year battle, I got a law passed to overturn these demeaning policies that abandoned American values.

I later broke through the “boys club” to become the first woman to command a fighter squadron and led my team in combat in Afghanistan.

My path, like the female pioneers who came before me, was not easy but I would do it again in a heartbeat.

When I was 12 years old, my dad passed away from a heart attack at the young age of 49. Shortly before he passed, he called me to his hospital bed and told me to make him proud. Those words deeply impacted the entire trajectory of my life.

I lost my dad between 6th and 7th grades, an immensely vulnerable period of any girl’s life. I was fatherless, grieving, confused and angry. By the grace of God, I was able to keep pushing forward with my life, propelled by his words and example.

As I neared high school graduation, I didn’t want to put myself in debt or financially burden my mom – a widowed, single mother of five – so I headed off to the Air Force Academy, where I was able to pay for my education through service to our country.

I have spent my life fighting stereotypes about what all women could or should do.

I was appalled and fired up when I was told of these restrictions. It made no sense to me, so I channeled my energy into what seemed like an impossible dream and decided I would become a combat pilot. People laughed at me and said it was against the law. I replied: “Thankfully, we live in America where laws can change!”

It took 10 years before the ban on women in combat was finally lifted. When that door opened in 1993, the military identified seven women who had earned a fighter assignment in pilot training but weren’t able to become fighter pilots because of our sex. I was one of those seven.

I’d finally reached my dream, ultimately making history as the first woman to fly an American fighter jet in combat.

Unfortunately, I quickly learned that just because the law had changed, didn’t mean the culture had. In fact, the Air Force chief of staff at the time had just a few years earlier testified before Congress that he would rather pick a less-qualified male than a more-qualified woman to fly a fighter. This bias at the top of the chain of command set the tone and culture for the Air Force.

It wasn’t easy, but I was inspired and encouraged by the pioneers who paved the way for me. I was honored to meet several of the feisty, patriotic, and amazing WWII Women Airforce Service Pilots just at the right time. They shared their stories of flying and the nonsense they dealt with as they served, and encouraged me in my own journey of service.

I was proud to call these American heroes both friends and wing women. Three of them sat in the front row when I took command of my squadron.

My time in the military taught me an invaluable lesson: Don’t walk by a problem. That’s how I went from yelling at the TV in my living room about the dysfunction in Washington to taking my heart of service and fighting for our great country to Congress, first in the House and now in the Senate.

I fight for all of my constituents, but I’m mindful of some of the real barriers women and girls still face.

In 2016, I launched the Working Group on Women in the 21st Century Workforce to examine the challenges women face in their careers and identify the best solutions.

The following year, I led the effort to double the child tax credit as part of the 2017 Tax Cuts and Jobs Act.

I have spent my life fighting stereotypes about what all women could or should do. We live in America, founded on the idea that we are all created equal and can achieve all we can without limits being place on us.

I’ve risked my life and my career for these principles and values.

To mark International Women’s Day, I pledge to continue to fight for equality and opportunity so that the women and girls can meet their God-given potential and dreams. Let’s have a world where we pick the best man for the job – even if she is a woman.