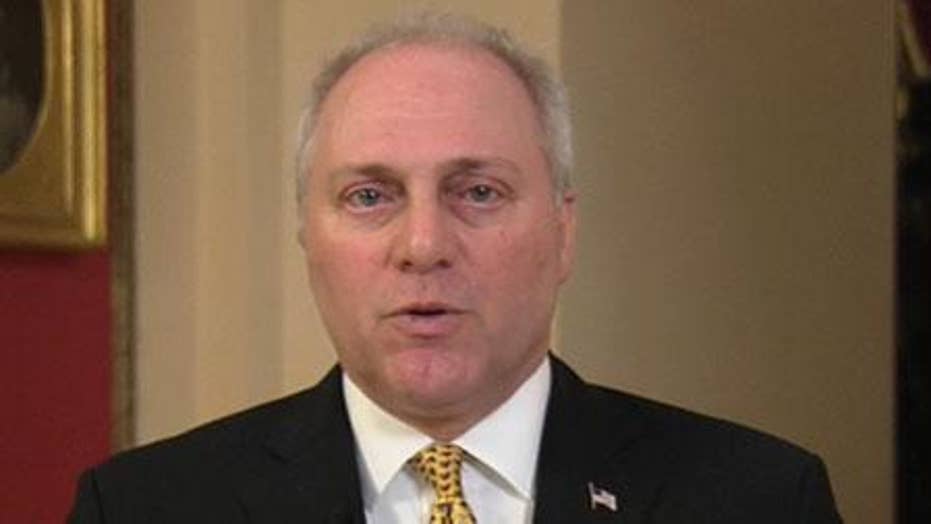 Scalise: Pelosi's legacy will be impeachment

Steve Scalise, House Minority Whip, says if Speaker Pelosi focused on getting things done instead of her "political vendetta" America would be better off

House Speaker Nancy Pelosi’s delay in transmitting articles of impeachment against President Trump to the Senate was never going to result in what anti-Trump activists demanded. But it further eroded the credibility of the impeachment process by reinforcing the perception that it is nothing but partisan political theater.

Frustrated that by nearly all accounts their latest ploy failed – and even exasperated a few Senate Democrats in the process – the speaker and her caucus have shifted to their latest partisan theatrics: the argument that Senate Republicans are now complicit in a “cover-up.”

The removal of a duly elected president is Congress’s most solemn constitutional power. Its impact is so profound that it should be exercised with great caution and restraint.

The founders left no ambiguity in each chamber’s responsibility. The Constitution lays it out succinctly: after the House investigates and passes articles of impeachment, responsibility passes to the Senate, which possesses “the sole Power to try all Impeachments.”

The Senate’s role is not to undertake a new inquiry, but rather to conduct a trial based on the articles of impeachment passed by the House and decide whether removing a president from office is warranted.

It’s also a historical precedent that the initial arguments in a Senate trial be limited to the testimony and evidence gathered by the House. That was the process used 21 years ago during the impeachment trial of President Bill Clinton – a process established by some of my Democratic colleagues still serving today, and the process the Senate intends to apply to the questions before us now.

During initial presentations, the Senate will only hear arguments from the record – the record the House built. After that initial phase, we can call in additional witnesses as needed.

The argument that the Senate should be expanding investigations before initial arguments are even presented is a tacit acknowledgment on the part of some Democrats of what we all know to be true: the House rushed and failed to complete its duty thoroughly, making a mockery of the impeachment process.

It also shows the failure of Speaker Pelosi’s latest scheme, in which she delayed transmission of the articles of impeachment for nearly a month to try to force the Senate to give credibility to the House Democrats’ partisan gamesmanship.

In doing so, Pelosi attempted to exploit nonexistent leverage to dictate to the Senate how we should conduct our constitutional duty – a tactic she was apparently inspired to try after watching CNN.

It took Pelosi’s Democratic colleagues in the Senate openly voicing their frustration with this partisan stunt for the speaker to relent and finally relinquish the articles of impeachment.

And now, the responsibility lies with the Senate. Despite what you may hear from our colleagues on the other side of the aisle, not to mention those in the media who carry their water, this trial will be open and evenhanded. Both sides will have the opportunity to make their cases.

No senator is neutral. After all, several Democrats are running national campaigns to replace the president, and the Senate minority leader spent the last month coordinating obstruction to the most reasonable path forward with the House speaker. But it is critical for our nation and our republic that we conduct a serious, straightforward impeachment trial.

The legitimacy of some of our most vital governing institutions is at stake. We must drop the games and move forward with these proceedings, so senators can carry out our constitutional duty and then get back to work on the issues that matter to the people who elected us to serve them.