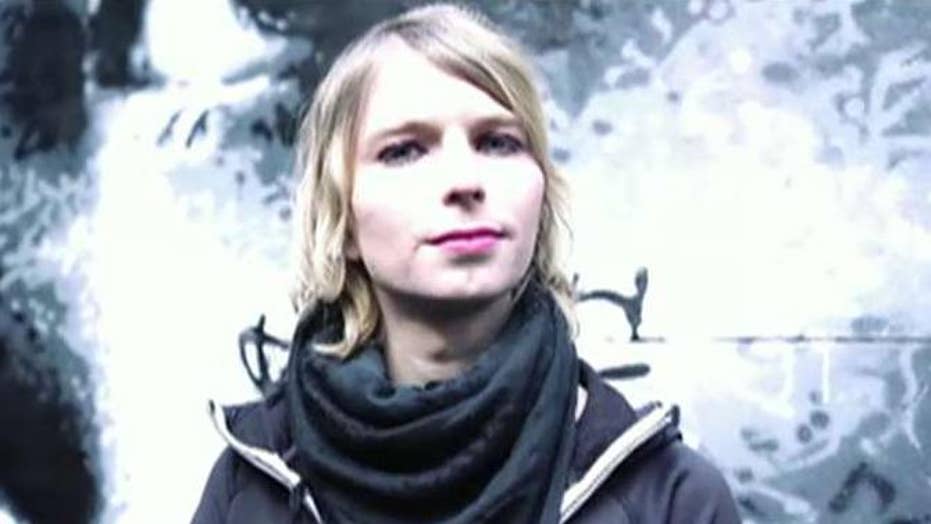 If Manning wins, can she be trusted with classified intel?

Chelsea Manning – who was sentenced to 35 years in prison after being convicted on charges of espionage, theft and fraud in 2013 – has filed to run for the Democratic nomination for the U.S. Senate in Maryland, announcing her run in a video this week. Let that sink in for a moment.

The former soldier – known as Bradley Manning before coming out as transgender – was released from a military prison after President Obama commuted her sentence late last year in the final days of his term.

Like me, you were probably shocked to find out that a felony conviction – let alone one for betraying your country – does not disqualify you from serving in the Senate. And while Manning’s chances of defeating popular Sen. Ben Cardin in the Democratic primary this year are extraordinarily slim, the very fact that this reprehensible backstabber can even perpetrate this farce is shameful.

To refresh your memory, Manning leaked around 750,000 classified and sensitive documents to WikiLeaks, which placed them on the internet. Authorities said this was the largest leak of classified documents in American history. Even thinking about rewarding this criminal with a Senate seat is beyond absurd.

All Manning would have to do is swear another meaningless oath and promise to obey it this time to once again gain access to our national security secrets, which she could leak again if she wished. That should fill you with confidence.

The sheer volume of documents ensured there was no way Manning could have reviewed them in any meaningful way. Manning basically provided randomly chosen pieces of our national secrets to all of our enemies. Operations were compromised and partners in Iraq and Afghanistan were identified and put at risk.

Manning claimed to have acted to expose U.S. war crimes. But even after exhaustive examination of all of the information she released, not a single war crime was identified. So in the end this was a selfish act by a childish individual who put her own petty grievances above the safety and security of the entire country and endangered the lives of honorably serving members of the U.S. military.

Now we have the spectacle of Chelsea Manning for Senate. While getting elected would be the longest of long shots, let’s think about the unlikely event that Manning beats the odds and actually becomes a senator.

Should that come to pass, the “world’s greatest deliberative body,” as the Senate likes to call itself, would seat a felon who purposely violated the oath of enlistment in the U.S. Army and betrayed America and fellow soldiers.

What’s important to note is that senators are not required to obtain a security clearance to gain access to classified government material. Former Army Pvt. Manning could never regain a security clearance after being convicted of espionage. But Sen. Manning would automatically be allowed to examine classified material by virtue of having been elected by the public to an office requiring this access.

Hey, what could possibly go wrong?

All Manning would have to do is swear another meaningless oath and promise to obey it this time to once again gain access to our national security secrets, which she could leak again if she wished. That should fill you with confidence.

It could even come to pass that this person who put our intelligence agencies and American lives at risk could serve on a committee providing oversight on the same agencies whose information she sent flying into the digital breeze. Just having to think through all of this is making my head ache and my stomach churn.

It will be very interesting to see how much support this #Resistance heroine, who has been very noisy in opposition to President Trump, can gain from the left. It is one thing to cheer on a somewhat comical protestor whose emoji addiction on Twitter leans heavily on rainbows and unicorns. It’s quite another to actually support an alumnus of the federal prison at Fort Leavenworth in Kansas for a job requiring the trust of the public.

Regardless of the outcome, we now have been forced to at least contemplate this senseless possibility. That is a sad commentary on the state of our political system, and we are all lowered by it.