Hannity: The DNC did try to collude with their government in 2016

We have breaking news: An admission from the Ukrainian embassy that, in fact, the DNC did try to collude with their government during the 2016 election. We actually have evidence.

We are going to show you how the Democratic Party is unraveling right before your eyes, lawmakers, presidential candidates alike literally melting down because they are Russia, Russia, Russia, collusion fantasy -- it's over. Anything from here on is just noise, nothing more, noise.

The witch hunt is done. Mueller has gone home. No collusion, no obstruction.

They lost, they lied, they conspired, they send out conspiracy theories and hoaxes. And now, the boomerang of justice is in full motion.

We begin with The New York Times which might have actually gotten something straight for a change. (Amazing.) They even said, wow, that the Steele dossier might actually be Russian disinformation to influence the 2016 election, the one Hillary paid for. But according to the paper, this is their news, Deep State spying against the Trump campaign did occur, a little late, but in a big way.

The headline reads, “FBI sent investigator posing as an assistant to meet with Trump aide in 2016.” The article details a London meeting between a female FBI investigator working undercover, a Cambridge professor, and a foreign policy expert named Stefan Halper -- we've talked a lot about this -- and Trump campaign adviser George Papadopoulos, he spent two weeks in jail.

The meet-up was supposed to be a foreign policy strategy session. The undercover investigator, well, set up the meeting. Halper was working as a secret FBI informant, and the pair both worked in unison to spy on Papadopoulos to set the Trump campaign up.

“The conversation at a London bar in September 2016 took a strange turn when the woman sitting across from George Papadopoulos asked a direct question: ‘Was the Trump campaign working with Russia?’”

Keep in mind, Halper was also set up multiple meetings with Trump campaign aide Carter Page, and Sam Clovis, and who was being wiretapped.

Another way they spied on the Trump campaign was through the FBI. After the FBI director, James Comey, and others obtained that FISA warrant using Hillary Clinton's opposition research -- what The New York Times now suggests could be Russian disinformation -- the phony, unverified dossier, the dirty, Russian dossier.

Wow, it is all beginning to come into focus, as I have been predicting. 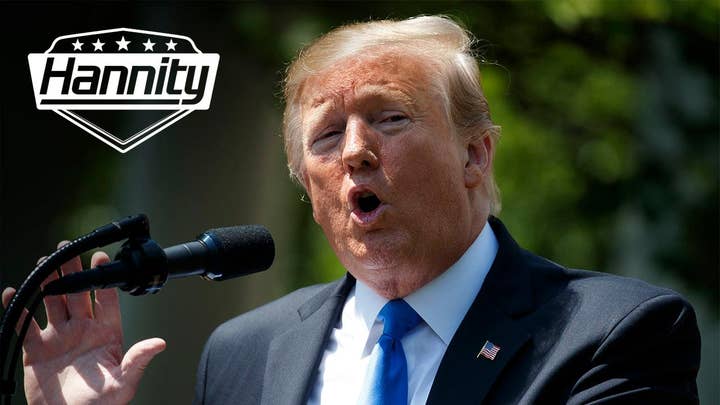 None of these spying sessions yielded any evidence of Trump-Russia collusion, because there was no collusion. But without a doubt, spying, the attorney general's right, did occur, in the height of a presidential election under the Biden and Obama administration’s watch, against an opposition party candidate, who knew, what, when? We will get those answers eventually.

Now, Democrats -- they are pretty detached from reality. Anything from here on in, it is noise. They can't handle, and they couldn't handle, the election loss, they can handle no collusion, no obstruction. But it's over. But watch them anyway. Here’s this exchange on Wednesday between Rhode Island Democrat Senator Sheldon Whitehouse and Attorney General Bill Barr:

Sen. Sheldon Whitehouse: In the entirety of your previous career in the Department of Justice, including us attorney general, have you ever referred to authorize department investigative activities, officially or publicly, as "spying?" I'm not asking for a private conversation.

William Barr, attorney general: I'm not going to abjure the use of the word "spying". I think -- you know, my first job was in the CIA, I don't think the word spying has any pejorative connotation at all appear.

Whitehouse: But you recognize --

Barr: The question is always whether or not it is authorized and adequately predicated spying. I think spying is a good English word that, in fact, doesn't have synonyms because it is the broadest word incorporating really all forms of covert intelligence collection. So I'm not going to back off the word spying.

By the way, thank god for the great intelligence officers that serve we the people. They are protecting us every day, the 99 percent, thank God for the premier law enforcement agency in the entire world, the FBI, the 99 percent.

Still, we now know that the Deep State aggressively spied on the Trump campaign during and after the election.

That is the biggest abuse of power. That's what we've got to solve, and if we don't get to the bottom of it, we lose the country.

There’s no sign that the Clinton campaign faced any similar scrutiny, even though, as it turns out, well, there was a massive amount of evidence that Clinton and the DNC more than once -- pay close attention -- trying to collude with foreign governments. Don't take it from me, just look at what the Ukrainian embassy confirmed to The Hill's John Solomon.

His bombshell new report explains how the government of Ukraine is accusing a DNC contractor named Alexandra Chalupa of attempting to collude with their government, saying that she, “sought information from the Ukrainian government on Paul Manafort's dealings inside the country in the hopes of forcing the issue before Congress.”

According to the ambassador's office, Chalupa also, “tried to arrange for the Ukrainian president to comment on Manafort's Russian ties on a U.S. visit during the 2016 campaign.” The evidence, comes after a Ukrainian court found that high ranking officials inside its government sought to help Hillary Clinton win the election. There’s also an admission from Bruce Ohr that a Ukrainian lawmaker was feeding phony, anti-Trump dirt to Fusion GPS, the firm that, well, yes, Bruce Ohr's wife Nellie worked for, the firm responsible for the bought and paid for, Russian lies to influence the 2016 election.

So now we know,it might have been Russian disinformation according to The New York Times.