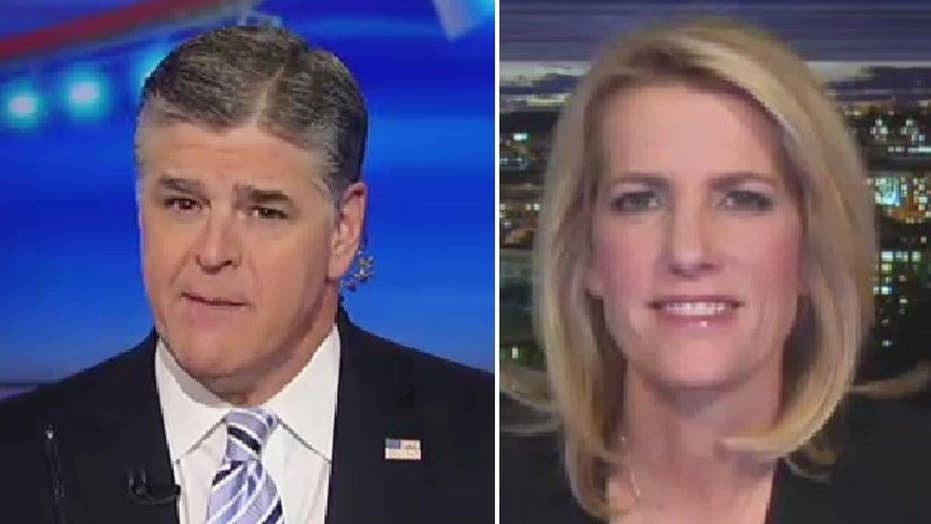 Ingraham on the 'alt radical left' and Trump's transition

Given the chance to speak out on the world stage against the anti-democratic, alt-radical left protests against President-elect Donald Trump, President Obama on Thursday incredibly chose instead to encourage the out-of-control behavior.

“I would not advise people who feel strongly or are concerned about some of the issues that have been raised during the course of the campaign -- I wouldn't advise them to be silent,” Obama said, in a joint press conference with German Chancellor Angela Merkel.

Well, some of these protests have been violent, and the situation cries out for leadership from the White House. But the lack of condemnation falls in line with everything that President Obama stands for. I tried to warn the country and everyone back in 2008 that Obama was a disciple of the alt-radical left, pointing out that he embraces the Saul Alinsky “Rules for Radical” tactics.

TOUGHEN UP, CRYBABIES, TRUMP IS YOUR NEXT PRESIDENT

All the signs were there: He palled around with unrepentant domestic terrorists Bill Ayers and Bernardine Dohrn, starting his political career in their living room. For 20 years, he sat in the pews of the Rev. Jeremiah Wright, the man who told his congregants “God d--- America.”

Since the president now refuses to speak out against these anti-democratic agitators, let me remind him about what has been going on:

These are just two of many examples. We've also seen continual protests all across the country that have resulted in the destruction of property, unlawful behavior and arrests.

Consider President Obama’s predecessor, President George W. Bush. He stayed out of the political arena, and he let Obama do his job. President Bush never responded to President Obama's relentless blaming and name calling. Instead, he took the “high road” Democrats often speak about but rarely travel.

“I don't think it's good for the country to have a former president undermine a current president,” Bush told me in an interview a few years back, explaining why he didn’t respond to criticism from his successor. “I think it's bad for the presidency, for that matter.”

Why do I suspect President Obama will never show the same amount of grace and respect when it comes to Donald Trump and his presidency? Here's my prediction: President Obama will not be able to contain himself, and he will go after Mr. Trump every single chance he gets once Obama is out of office.

And here's another thing. After Donald Trump's sweeping victory, President Obama has been in complete and utter denial that the election had anything to do with him or his failed policies. The facts say otherwise. Since 2009, Democrats have lost 13 U.S. Senate seats, 64 U.S. House seats, 13 governorship and 33 statehouses.

Wow! What a legacy.

Our next president, Donald Trump, has been handed a huge mess. It is almost beyond repair, thanks to President Obama, and that's why this election was so important. But Republicans now have control, and no excuses for not fixing things.

President-elect Trump needs to keep in mind that the media is never going to like him, especially after WikiLeaks exposed that CNBC, MSNBC, CNN, The New York Times and many others were openly colluding with the Clinton campaign.

The president-elect also needs to understand the Republican establishment is not going to be his friend, either. He needs to stay focused and remember the promises he made to you, the American people. And unlike President Obama, when Trump takes office, he must call out lawless behavior disguised as protests when it threatens the lives and property of U.S. citizens.