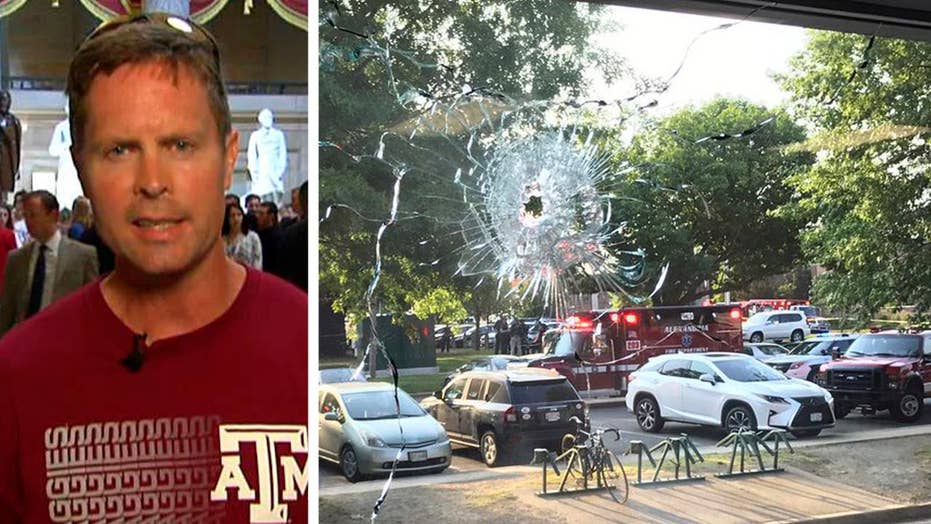 Rep. Davis: 'Political rhetorical terrorism' has got to stop

Congressman at baseball field shooting sounds off on 'America's Newsroom': We have to come together

It wasn’t long after Wednesday’s shooting at the Congressional Baseball Game practice in Virginia that attack survivor Rep. Rodney Davis, R-Ill., challenged the American people to “ratchet down the rhetoric” on social media and the 24-hour news cycle. Speaking to Fox News’ “America’s Newsroom,” he stated “this is the result, I believe, of political rhetorical terrorism. That has to stop.”

Senator Tim Scott, R-S.C., also spoke on the issue, “we’ve seen ourselves engulfed by the spirit of division and oppression and we have to find a way to crawl our way out of this hole.”

House Minority Leader Nancy Pelosi, D-Calif., said on the House floor that she prays for her colleagues regularly and that “on days like today, there are no Democrats or Republicans, only Americans united in our hopes and prayers for the wounded.”

We, as the American people, have a responsibility to safeguard our communities from such rhetorical terrorism - both online and offline.

Leaders on Capitol Hill—from both sides of the aisle—have finally found common ground on the critical message of unity. I can only hope that our nation’s policymakers continue seeing themselves as Americans first—before any political party affiliation. But it’s not just on lawmakers to lead the way. And certainly, this type of change can’t be legislated. We, as the American people, have a responsibility to safeguard our communities from such rhetorical terrorism - both online and offline. Unfortunately, for many users, social media has devolved into a cacophony of hate.

As the Pew Research Center noted, “more than one-third of social media users are worn out by the amount of political content they encounter, and more than half describe their online interactions with those they disagree with politically as stressful and frustrating.”

In fact, moments after the gunman was identified as a former Bernie Sanders volunteer, social media was saturated with people pointing the finger at the Left as the reason for today’s violence. Much like the Right has been blamed for every racially-motivated hate crime since President Trump’s election. Both sides are missing the point. We are all responsible for the quality of discourse in which we engage.

Just because someone thinks differently from you doesn’t mean that they are evil. But far too often, we assume the worst of intentions from our fellow Americans. And our political speech is not borne from a love of country but rather a spirit of resentment for any idea contrary to our own. Instead of demonstrating an understanding of another person’s argument and then addressing it, we shout our views and hurl insults at one another. But if you can’t defend your thoughts in the free market of ideas, perhaps it’s a sign that you ought to rethink them.

In a season of so much discord, it’s imperative that all of us heed Rep. Davis’ advice and “ratchet down the rhetoric.” The safety of our beloved country depends on it.