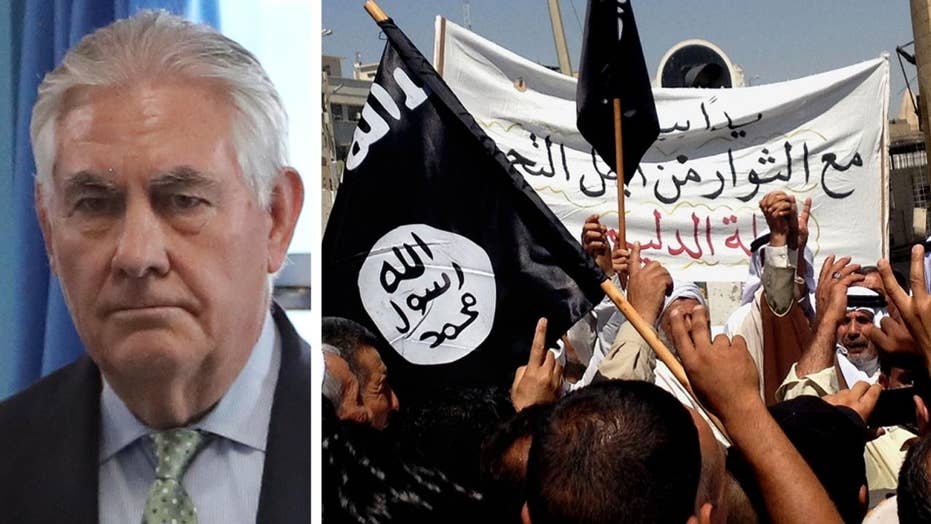 Secretary Tillerson to address the fight against ISIS

Kristin Fisher with a preview of the meeting

Leaders from 68 countries gathered in Washington for a meeting of the Global Coalition to Counter Daesh (ISIL) hosted by President Trump’s administration this past week.

Saudi Arabia welcomes the new administration’s attention to the Middle East and its support for America’s friends who are fighting back against transnational terrorists such as Daesh and pushing back against Iranian interference in countries such as Yemen.

As Americans would say, “You’ve got our back.” And America’s support is indispensable as we stand together against a host of threats to regional stability.

While meeting with Saudi Deputy Crown Prince Mohammed bin Salman – an architect of our country’s economic, social, and governmental reforms – at the White House recently, President Trump enthusiastically endorsed the modernization drive that will make our country an even more valuable strategic partner. Similarly, our government welcomes the United States’ long-standing support of the Saudi defense forces.

The new administration is also toughminded about the Iranian threat to regional stability, which was magnified by the recent nuclear deal between Iran and six world powers, including the United States.

Saudi Arabia is prepared to work with the United States and its allies to restrain Iranian conduct, just as we have helped to stabilize the Arabian Gulf and its energy supplies since World War II. While the US-Saudi partnership is time-tested, reaffirming this relationship is a matter of strategy, not sentiment. Since the Global Coalition’s founding three years ago, Saudi Arabia has been an active partner from Day One, including sending fighter jets to the Incirlik airbase in southern Turkey to join the US-led air campaign against Daesh in Syria.

To ensure that charitable contributions don’t subsidize terrorism, we prohibit Saudi mosques and aid organizations from transferring money outside our country.

We have also taken strong steps to stop unauthorized shipments of military equipment from leaving Saudi Arabia and to prevent people from crossing our borders to join Daesh in Iraq or Syria.

Meanwhile, Saudi Arabia is mobilizing the Muslim world against the extremist threat to our religion. Under Saudi leadership, the 41-nation Islamic Coalition is equipping our countries to fight violent extremists by training our security forces and sharing information and intelligence.

Last March, in the largest joint military exercise ever in the Middle East, some 350,000 soldiers, 20,000 tanks and 2,500 warplanes from 20 countries joined together in “war games” in the Saudi desert to jointly train our security forces for operations against non-state armed groups.

Turning from the battlefields to the battle of ideas, the Islamic Coalition is encouraging educators and scholars as well as religious and political leaders to raise their voices against those who preach violence. Moreover, Saudi Arabia has created a center which operates 24/7 to analyze social media to identify and track terrorist efforts to recruit and activate new followers.

But non-state armed groups and radical preachers aren’t the only threats. By conducting ballistic missile tests last month and meddling in Yemen, Lebanon, Syria, Iraq, the Sinai Peninsula and even the Gulf States, Iran is imperiling the stability of our region. Even more disturbingly, Iran is sharing ballistic missile technology with the extremist Houthi militia in Yemen and similar groups in other countries, thereby imperiling the security of the entire region.

In Yemen, which shares a 1,100-mile border with Saudi Arabia, Iran is supporting and arming the Houthi militia, modeled on the terrorist Hezbollah movement that has destabilized Lebanon. While making Yemen ungovernable, the Houthis are attacking Saudi Arabia, having fired more than 40,000 mortars, rockets and other projectiles at our towns, killing at least 375 civilians, closing more than 500 schools and displacing 24 villages and over 17,000 people.

Responding to this threat, Saudi Arabia leads a coalition of 12 countries fighting to reinstate Yemen’s legitimate, internationally recognized government and restore peace and security to the country.

To be sure, Saudi Arabia prefers to promote stability through peaceful means, as we do by providing much-needed diplomatic and economic support to strategic allies such as Egypt and Jordan. But aggression, active destabilization and acts of terrorism, including Iran’s infringements in Yemen, demand a military response.

From the Cold War through the War on Terror, the U.S. has helped Saudi Arabia strengthen our defenses through joint military training exercise and ballistic defensive weapons sales, making our country the largest customer of U.S. military equipment.

Today, we’re working with the United States and its allies to defeat Daesh, Al Qaeda and Iranian-sponsored extremism and expansionism.

We stand shoulder-to-shoulder for a secure and stable Middle East in a peaceful and prosperous world.