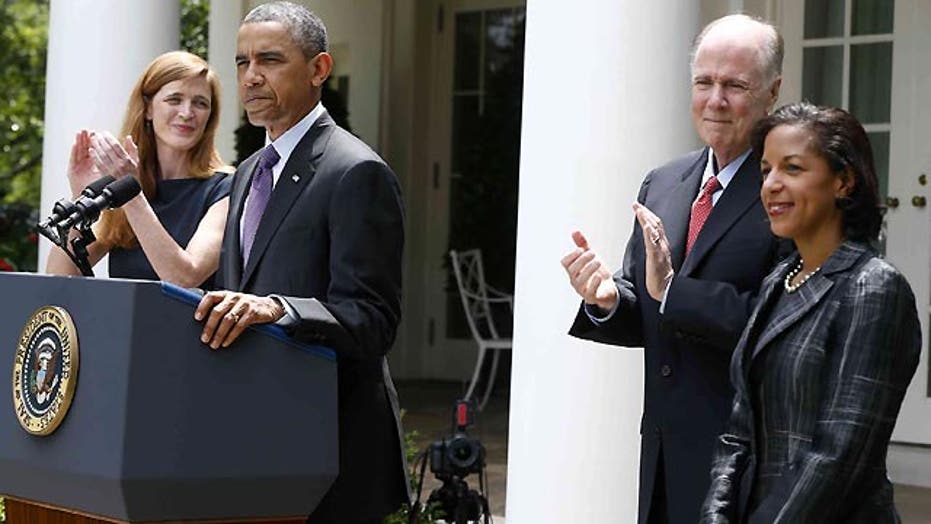 The woman charged with the protection of global human rights for the White House for the last four years was promoted Tuesday to represent the United States at the United Nations.

Despite leading an embarrassing policy of inaction -- during which 80,000 plus Syrians were killed by violence created by their own government, thousands of Sudanese were ethnically-cleansed in Darfur, and hundreds of thousands were murdered and displaced in the Congo -- President Obama announced Tuesday that he has selected Samantha Power, an academic and 2008 Obama presidential campaign aide, as his next nominee to represent the United States as ambassador to the United Nations.

Power, a former Harvard professor known for lecturing U.S. government officials to do more to stop international violence, ran the White House’s Office of Multilateral Affairs and Human Rights until March of 2013.  She was also appointed in April 2012 by the president to chair a newly-formed Atrocities Prevention Board.  Power’s book “A Problem from Hell, America and the Age of Genocide” even won a Pulitzer Prize.

Power has spent most of her career advocating for increased U.S. government involvement to stop rights abuses around the world.

Her appointment to run the White House office for human rights was loudly trumpeted as a coup for the NGO community: The woman whose career skyrocketed by lecturing President Bush on his inaction in Sudan was now in charge of the U.S. government’s response to future crises.

However, it didn’t take long before Power’s decades of big talk was put to the test.

In a position of power and proximity to the president of the United States, from which she could meaningfully act against any unfolding injustice, Power was largely silent and completely ineffective.

The NGO community was left wondering which Samantha Power was getting to speak inside the Oval Office.

Prior to entering government, Power was a loud supporter of the international concept “Responsibility to Protect (R2P)”, a U.N. supported term that pressures those in power to protect the vulnerable during war, crisis and poor governing.

In fact, it’s not an over-statement to say her career was built on the idea that the government should act more and talk less.

But from inside government while sitting comfortably ensconced at the White House’s National Security Council, she was one of the most disappointing leaders to the R2P activists.

In August 2004, while happily perched at Harvard, Power wrote a lengthy piece for the New Yorker on the issue of Sudan where she lamented the slowness of the Bush administration to confront the killing of tens of thousands of Sudanese, questioned President Bush’s motives for confronting the killings, and criticized him for not getting other countries to help.

“Neither President Bush nor Kofi Annan, the Secretary-General of the United Nations, spoke publicly about the killings in Darfur before March of this year, by which time some thirty thousand people had died as a result of ethnic cleansing,” Power said.

Even when giving President Bush credit for later dealing with the issue, Power cynically questioned his reasons.  She said, “The stage was set: Bush would delight his Christian constituency; U.S. businesses would gain access to Sudan’s oil; and Sudanese civilians would stop dying.”

Yet once Power finally achieved a position of actual authority, she continuously failed to act or even forcefully speak out in favor of U.S. government action.

She espoused little to no support of Iran’s 2009 Green Revolution when Iranian students and others took to the streets to protest the election of Mahmoud Ahmadinejad.

She sat silent during the crucial moments when the Syrian crisis first started and has remained absent for two years as 80,000 plus Syrians have been killed.

And despite years of fierce rhetoric against Bush for inaction in Darfur, she has become mute as genocide continues to ravage the region.

An academic with zero real-world diplomatic experience, her biting words ring hollow from inside the White House.

Elizabeth Blackney, an NGO activist on human trafficking said, “For Samantha Power to be promoted is disturbing.  She shed her record as an anti-genocide, human rights advocate for political power and affiliation.  She became the bystander, the "person sitting in an office" implementing a bad policy that ensured greater suffering."

Sending Power to the United Nations sends the message that President Obama doesn’t care as much about actually helping the world’s vulnerable as he does about loyalty and academic prestige.

Sadly, the U.S. may be represented at the U.N. by someone who has no multilateral diplomatic experience outside of one-hour classroom exercises.

Power’s record at the NSC proves academic success means little in the real world, but all-too-much to the president of the United States.