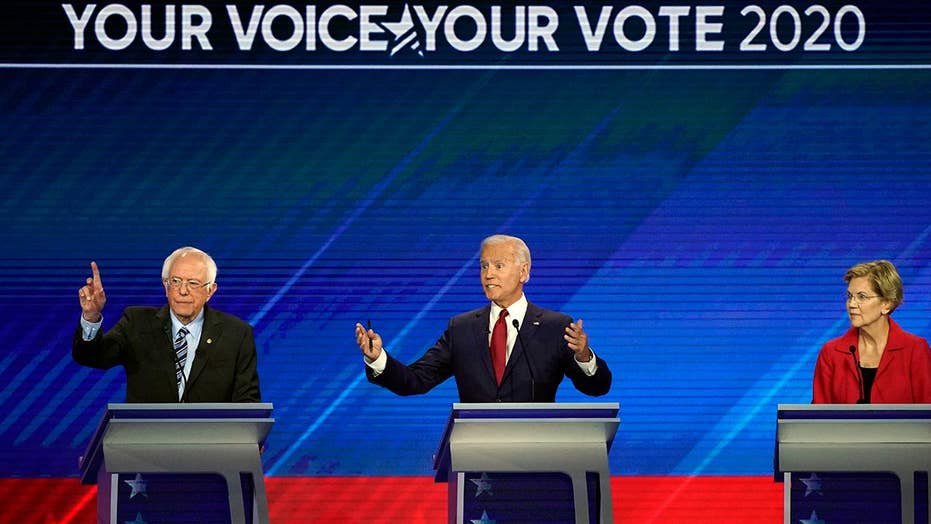 Biden demanding answers on how Sanders, Warren plan on paying for 'Medicare for All' plans

The New York Times has detailed how Sen. Bernie Sanders, I-Vt., came to be fixated on Canada's health care system. That fixation manifested itself again during the Democratic presidential debate in Houston.

It started with an illness that befell his mother while Sanders was in high school. His family struggled to pay for her care, until she died in 1960, in her mid-40s. That experience "instilled in him the desire to ensure everyone had access to medical care," as the Times put it.

A quarter-century later, after he'd made his home in Vermont, a trip across the border to Canada convinced him that American health care was "barbaric" -- and that the United States needed to follow the example of its neighbor to the north.

But Sanders has it backwards. The American health care system is not barbaric. In fact, patients of all kinds -- including those like his mother -- fare far worse in Canada.

Sanders contends that Canadians can "go to the doctor whenever they wanted and not have to take out their wallet." That's not exactly true. Last year, the median wait for treatment from a specialist following referral from a general practitioner in Canada was just under 20 weeks, according to the Fraser Institute, a Vancouver-based think tank. In some provinces, patients faced median waits of more than 40 weeks for specialist treatment.

These wait times can make "free" health care quite expensive. For instance, many patients can't work while they're waiting for treatment -- and so they forego thousands of dollars in income. All told, wait times cost Canadians $2.1 billion Canadian dollars (CDNs) in 2018. That's equivalent to $1,924 CDN for each and every person waiting.

Those estimates only take into account the 40 hours in a standard workweek. Factor in the other 16 hours in a day and the weekend, and the cost climbs to $6.3 billion CDN, or $5,860 CDN per patient.

Waits are so bad that some patients pay out of pocket to seek treatment elsewhere. Canadian "medical tourists" have left the country for everything from an $800 CDN MRI to an $18,000 CDN hip replacement to avoid waits. Last year, Canadians made up to 323,700 trips abroad for medical care, according to SecondStreet.org, a think tank.

Canada also has less than 16 CT scanners for every million people. The United States has nearly three times as many of these devices, which are used to diagnose a number of diseases, including cancer.

Like Sanders, I've watched my own mother struggle to gain access to needed care. But my mother was deprived by the Canadian system Sanders admires so much. After experiencing severe stomach pain, my mother requested a colonoscopy. Doctors delayed her procedure several times so younger people on the waiting list could go first. By the time she received her procedure, it was too late to treat the colon cancer it uncovered.

Because of this lack of equipment and personnel, Canadian patients have worse access to cancer screenings and higher mortality rates for certain cancers, relative to U.S. patients.

Sanders may believe that Canadian-style universal coverage would prevent tragedies like the one visited upon his mother. But Canada's health care system is chock full of patients who have suffered, or even died, despite having government-sponsored health insurance. That's because access to coverage does not equal access to care.

Take Sharon Shemblaw, a 46-year-old mother of three from Ontario diagnosed with acute myeloid leukemia in August 2015, according to reporting from the Toronto Star. Doctors told Shemblaw a stem-cell transplant would give her an 80 percent chance of survival. But her local hospitals didn't have the resources to treat her.

So Shemblaw sought treatment in the United States. Like Sanders, Shemblaw's daughter Amanda took time off from school to take care of her. But by the time she made it to Buffalo for treatment, it was too late. Shemblaw died in May 2016.

Like Sanders, I've watched my own mother struggle to gain access to needed care. But my mother was deprived by the Canadian system Sanders admires so much.

After experiencing severe stomach pain, my mother requested a colonoscopy. Doctors delayed her procedure several times so younger people on the waiting list could go first. By the time she received her procedure, it was too late to treat the colon cancer it uncovered.

The American health care system is far from perfect. But if Sanders were serious about helping families like his, he'd leave the Canadian health care model on the other side of the border.