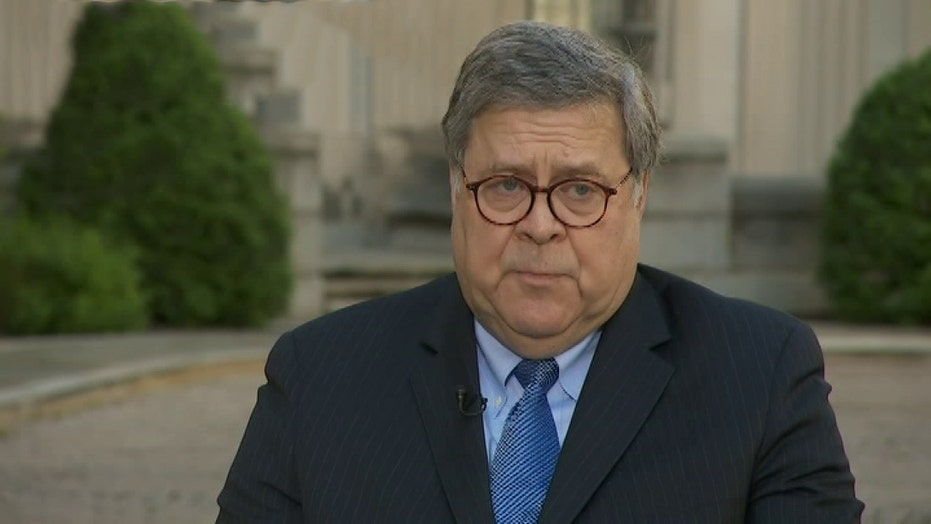 Barr: Russia hoax was done to sabotage the presidency

The footnotes show the FBI was warned that some of the information compiled by ex-British spy Christopher Steele could have been part of a Russian disinformation campaign.

The report issued in December by Inspector General Michael Horowitz details how Steele put together his thoroughly debunked Russian dossier in the summer of 2016 and weaponized it for political gain. That dossier became the basis for surveillance against the Trump campaign. Horowitz ultimately found 17 “errors or omissions” in the Foreign Intelligence Surveillance applications against former Trump campaign adviser Carter Page.

FRED FLEITZ: HERE'S WHAT'S BEHIND THE SENATE-HOUSE DISPUTES ON RUSSIAN MEDDLING IN 2016 ELECTION

The significant disclosure about the footnotes goes straight to one of the central questions of this four-year-long disgrace. Since the FBI was aware of the Russian disinformation campaign as it pertained to Steele’s work and knew Steele was working on behalf of the Hillary Clinton campaign and the Democratic National Committee, why did they plow forward with the Crossfire Hurricane investigation and the abusive FISA warrants targeting Page?

Just as troubling, why did Special Counsel Robert Mueller take two years to investigate a theory that the FBI knew internally was riddled with Russian lies? These shocking revelations are the reason President Trump distrusted the bad apples leading the FBI at the time.

Let’s hope we get answers to these questions from U.S. Attorney John Durham and his team, who are investigating the origins of the FBI’s targeting of the Trump campaign.

While the release of these footnotes is welcome news and a win for transparency, it begs the question of why the redactions were necessary in the first place. The release of the Horowitz report was delayed for many months due to a tortoise-paced review and declassification process, which is the Deep State’s standard operating procedure to manipulate the release of information.

The American people have a right to see complete versions of these records. And now that the Horowitz investigation is over, there’s no reason for any redactions – other than for individual privacy and actual national security concerns.

The American people deserve more transparency, not less – particularly with this critical topic. Withholding information on account of legitimate national security concerns is one thing, but the FBI, Justice Department, and State Department are not allowed to block information from the public simply because it might cause the swamp some embarrassment.

This troubling episode emphasizes that more should be declassified without delay so that what happened to President Trump never happens again.

The president promised for the past two years to declassify these documents so the American people get answers. With declassification advocates such as Acting Director of National Intelligence Richard Grenell and White House Chief of Staff Mark Meadows in his corner, now is the time for bold action.

The American people have a right to see complete versions of these records. And now that the Horowitz investigation is over, there’s no reason for any redactions – other than for individual privacy and actual national security concerns.

Though we are gradually learning more about the origins of the Russia investigation, the footnotes remind us that the public still does not have complete information about why the FBI disregarded Steele’s political agenda and use of Russian disinformation as it made key decisions in the investigation of Trump’s 2016 campaign. With all of these flashing red lights saying “stop,” the FBI persisted.

The American people have a right to know who at the highest levels of the Obama administration was supplying the political pressure that caused this national nightmare to continue.