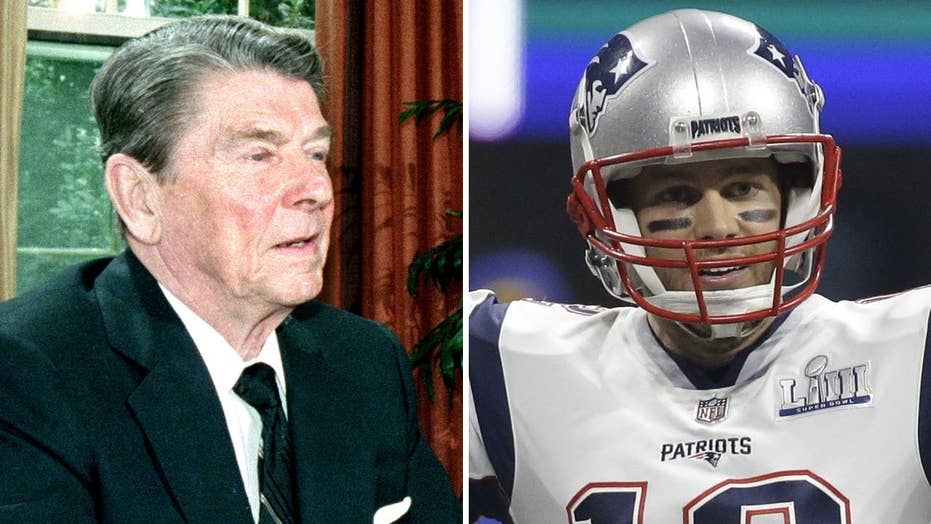 Ronald Reagan was right in so many ways... just ask Tom Brady

On the 108th anniversary of the birth of Ronald Reagan, the president's former executive assistant Peggy Grande says the Republican's legacy is still evident today.

Wednesday is the 108th anniversary of the birth of one of our greatest presidents – Ronald Reagan. And as we saw in the Super Bowl Sunday, “Reagan” still means “right.”

In an appropriate and timely nod to the 40th president of the United States, during the third quarter of Super Bowl LIII New England Patriots quarterback Tom Brady yelled an audible “Reagan, Reagan.” Commentator Tony Romo correctly figured out the meaning and said if Brady was yelling “Reagan” it must mean “run to the right.”

The world watched, and no doubt many people chuckled. How refreshing. We smiled at a political reference – probably the first time in a very long time.

RONALD REAGAN SHOWED US HOW TO DEAL WITH TODAY'S POLITICAL DEMONIZATION

The timing was appropriate, coming just a few days before the anniversary of President Reagan’s birth on Feb. 6, 1911.

Ronald Reagan was born in a small town in central Illinois in the midst of a snowstorm to a poor family, with an alcoholic father. That’s an unlikely start for a rise to greatness, yet it’s an “only in America” story of the truest kind.

And all these years later we still think of Reagan as “right.” Yes, of course, for his political leanings, but equally now for his warm and engaging personality and the civility he embodied.

Reagan was right to reach across the political aisle to talk to and develop friendships with those he politically opposed. He was right to sometimes disagree on policy without being disagreeable personally. 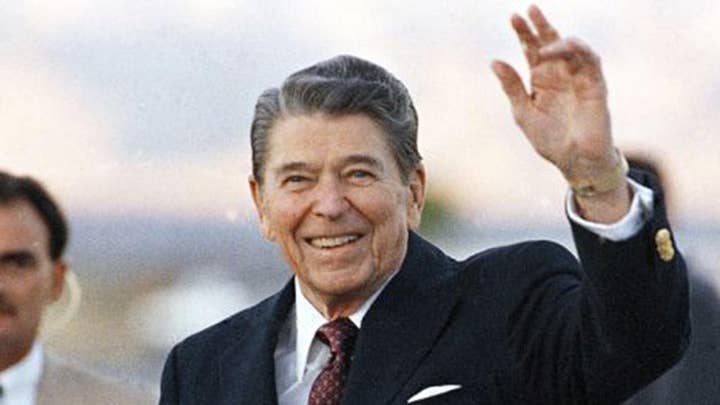 Reagan was right to believe in the value of face-to-face diplomacy – optimistically expecting there was nothing that couldn’t be solved when two leaders sat down and talked to each other, rather than about each other.

He was right to courageously go toe to toe with the Soviet Union and stare down that “Evil Empire,” deeming the Soviet Union as “destined for the ash heap of history,” while ultimately providing a pathway out for Soviet leader Mikhail Gorbachev.

President Reagan helped the people of the Soviet Union – which broke up into independent nations – move forward to a future of greater peace, prosperity and freedom, even developing a personal friendship with Gorbachev along the way.

Reagan was right to be a champion for all Americans, especially bringing a voice to those who felt voiceless and underrepresented. Perhaps it was his Midwest upbringing that gave him a special appreciation for the farmers and the blue-collar workers and the patriotic Americans in what others dismiss as “flyover states.”

Ronald Reagan was right to know that we didn’t need to love him in order for America to be successful, but instead we needed to love our country and love who we were as a people.

Yet Reagan never saw his humble Midwest upbringing as something he needed to overcome. Instead, it was the very foundation for everything he ultimately would become.

Reagan was right to know that in America, “We the People” means that we tell the government what to do, not the other way around. So he intentionally connected with the people of this great nation as often as he could.

And President Reagan connected with the people in many ways – through weekly radio addresses to the nation, and Oval Office addresses where he could look through the lens of the camera and come right into your living room and talk directly to you. Millions of people trusted his sincerity and were captivated by his vision for America.

Reagan was right to know that all we needed to emerge from the malaise of the 1970s was for government to get out of the way. He succeeded in getting government off the backs of the American people to once again allow them to innovate, invest, expand, explore, create, build and dream.

And we did. The 1980s saw exponential growth and turnaround in every sector as a result.

Ronald Reagan was right to know that we didn’t need to love him in order for America to be successful, but instead we needed to love our country and love who we were as a people.

Under President Reagan we were bold in shining the torch of freedom to dark corners of the world where oppression still existed. We were proud of the economic resurgence that led West German Chancellor Helmut Kohl at the 1983 G7- Economic Summit to say “tell us about the American miracle.”

Reagan was right to rebuild our military and give our service men and women reason to stand tall and proud once again. He was right to embody “peace through strength” and find a way to win the Cold War without firing a single shot.

Most of all, he was right to restore a renewed patriotism and pride in the flag, in the United States and in boldly wearing and waving the red, white and blue.

Many are familiar with Reagan’s role as George Gipp in the movie “Knute Rockne: All American,” where he utters the famous line “Win one for the Gipper.”

What many may not know is that Reagan himself was also a football player at Dixon High School in Dixon, Illinois and also played for Eureka College in Eureka, Illinois. And even more fitting, and foretelling of his future, you can probably guess the position he played – right guard.

Yes, Reagan still means right. Thank you, Tom Brady and Tony Romo for reminding us all of that.