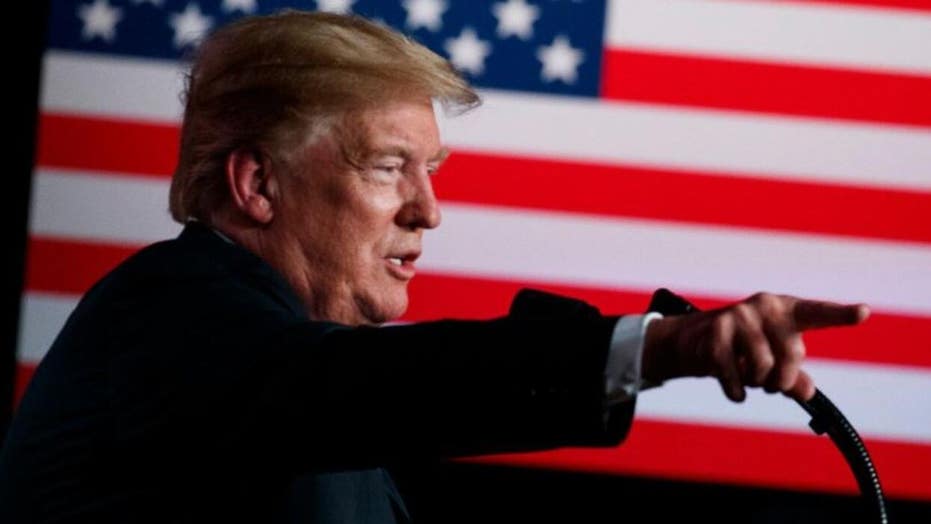 How GOP plans on holding convention in Jacksonville

Ronna McDaniel, RNC Chairwoman, explains how the GOP plans on holding a 'healthy and safe' convention

With less than four months to go until Election Day, Nov. 3 is starting to get “awfully big in the window,” to paraphrase Tom Hanks in the movie "Apollo 13."

Next month Republicans and Democrats will hold their national conventions to formally nominate their candidates for president and to conduct party business. Although this year’s conventions will look much different than usual on account of the COVID-19 pandemic, essential party functions will still take place. One noteworthy difference this year will be the party platforms. Because Gov. Roy Cooper, D-N.C., played politics, Republicans changed the location of their convention from Charlotte to Jacksonville and will keep the successful America First platform from 2016 intact. On the Democratic side, it is yet to be determined exactly how they will debate their radical left-wing 2020 platform.

Due to the coronavirus and a lack of traditional campaigning by President Trump and his Democrat opponent former Vice President Joe Biden, this year the party platforms will take on much greater significance than usual and the American people would be wise to take a serious look.

After all, only one candidate -- President Trump -- is regularly answering questions from the press and fully engaging in the national debate in the midst of the unforgettable summer of 2020. Former Vice President Joe Biden on the other hand is rolling the dice with what I call the “Tahiti strategy” of staying away from the campaign trail and only coming up for air from his basement when absolutely necessary. With this enormous in-kind corporate contribution from his allies in the liberal media, Biden is getting the largest free pass we’ve seen in modern history.

With President Trump’s daily back and forth with reporters and his unprecedented accessibility, the American people are already well-acquainted with the Republican platform. It centers on the greatness of our republic -- “the last best hope of earth” as Abraham Lincoln described it -- and articulates why tens of millions of people from around the world want to come to our shores legally to pursue the American Dream. On the issues, Republicans stand for the pro-growth economic principles of low taxes and deregulation; a border wall and enforcement of our immigration laws; a health care delivery system with more private-sector competition; and unwavering support for the Constitution, Bill of Rights, rule of law and sanctity of life. Republicans also understand the importance of maintaining American history and know that the fascists who seek to erase our history are doomed to repeat it.

With network and cable news covering the coronavirus, police violence, racial unrest, protests, rioting, an explosion in city shootings and the destruction of statues and monuments on an endless loop, it’s easy to lose sight of the fact that career politician Joe Biden is not the Joe Biden from 10, 20, or 30 years ago. The Joe Biden of today has become a radical socialist out of political necessity because the mob is calling the shots on the political left. And that’s why the platform coming out of the Democratic National Convention in Milwaukee, Wis., that will take place from Aug. 17-20 will be so telling. It will make clear that Joe Biden -- in his decades-long obsession to become president -- will now do whatever the America-haters tell him to do.

In fact, the 2020 Democratic platform will be the most un-American, socialist-inspired document to come out of a major party convention in American history.

For starters, I predict the 2020 Democratic platform will call for massive tax increases that will stop our economic recovery in its tracks; embrace “Medicare for All,” which would throw untold millions of Americans off of their private health insurance plans; support open borders and taxpayer-funded health care for illegal immigrants; and go back to the Obama-era policy of giving away the store to China.

By all accounts, this alone would be characterized as a wildly unpopular, outside the mainstream platform, but what comes next is truly terrifying for the future of the United States of America. On the eve of the 2008 presidential election, then-candidate Barack Obama said he was planning on “fundamentally transforming the United States of America.” While many Americans took note of Obama’s mysterious proclamation, it was unclear what he actually meant. Now, with the left’s call to defund police, delete our nation’s history by destroying monuments and statues, damage churches both physically and constitutionally, pack the Supreme Court, end the filibuster and shred our founding documents, we know. And recently Joe Biden encouraged this dangerous movement by tweeting “we won’t just rebuild this nation -- we'll transform it.”

We’re living in historic and turbulent times, and it’s become critically important for law-abiding, hard-working American taxpayers from all backgrounds to stand up for their country by not giving in to the mob that has formed on the political left. This dangerous movement has been aided and abetted by Democratic politicians as well as the liberal media. Now, it must be confronted by the forgotten men and women who will turn out in record numbers to vote for their family, faith, security, prosperity and country and reelect President Donald Trump.