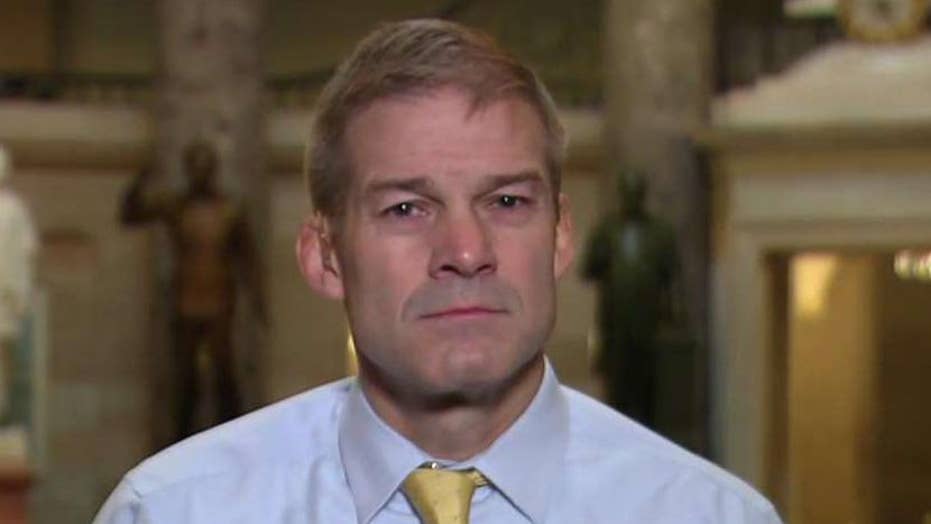 Rep. Jim Jordan to Jeff Sessions: It's time to do your job

Mr. Attorney General, it’s time to do your job.

Why in 2016 did FBI Director James Comey call the Clinton Investigation a “matter,” not an investigation? After all, Mr. Comey wasn’t Director of the Federal Bureau of Matters.

Why in 2016 did James Comey and the Justice Department give Cheryl Mills, Secretary Clinton’s Chief of Staff, an immunity agreement for turning over her laptop computer? Typically, the Department would issue a subpoena or get a warrant and seize it. Why in this case did the FBI agree to destroy the laptop?

Why in 2016—one day before the Benghazi report was released and five days before Secretary Clinton was interviewed by the FBI—did Attorney General Lynch meet with former President Clinton on the tarmac in Phoenix?

Why did the intelligence community in the final months of the Obama Administration unmask names at a record rate?

Why in the days following the meeting, and when emailing with the public relations staff at the Justice Department, did Loretta Lynch use the pseudonym “Elizabeth Carlisle?” If your conversation with the former President was only about golf and grandchildren, then why not use your real name?

Why was the decision on whether to charge Secretary Clinton made by FBI Director Comey and not the Attorney General?

Why did James Comey publicize the Clinton Investigation?

Why in 2016 did the FBI pay for the Russian Dossier? It’s been reported that in addition to the Clinton Campaign and the Democratic National Committee paying FusionGPS for the dossier, the FBI also “reimbursed” Christopher Steele, author of the dossier.

Why was FusionGPS co-founder Glenn Simpson meeting with Russian lawyer Natalia Veselnitskaya both before and after her meeting with Donald Trump, Jr.?

Why is the FBI so reluctant to tell Congress and the American people if the dossier was the basis for a FISA court order permitting the government to spy on Americans associated with President Trump’s campaign? If the dossier was a legitimate intelligence document relied on by the court, then why not just tell the country?

Why on January 6, 2017 did James Comey brief President-Elect Trump on the dossier? Again, if the dossier was a legitimate intelligence document, then why wait two months after the election to inform the President-Elect?

Why did the Obama Administration leak to CNN that Mr. Comey had briefed President-Elect Trump on the dossier? Several media outlets had the dossier prior to the briefing, yet no one would print it because most of the document could not be substantiated. In his Congressional testimony, Mr. Comey himself called the dossier “salacious and unverified.” As pointed out in The Federalist, did the fact that the FBI Director had briefed the President-Elect on the dossier give it the “legitimacy” the press needed to go ahead and print something they knew was not accurate?

Why did the intelligence community in the final months of the Obama Administration unmask names at a record rate?

Why, after Mr. Comey was fired on May 9, 2017, was it so critical for a Special Counsel be named to examine possible Trump/Russia collusion? So critical that James Comey leaked a government document about his conversations with President Trump through a friend to the New York Times.

Why is the Special Counsel Robert Mueller? According to The Hill and Circa News, in 2009 and 2010, the FBI through an informant learned Russian companies seeking to do business in the United States were involved in kickbacks and bribes. Yet, FBI Director Robert Mueller did not inform Congress and did not inform the Committee of Foreign Investment in the United States (CFIUS), the entity responsible for the decision on whether to approve the Uranium One deal.

Why did Robert Mueller not inform CFIUS? And why did the Justice Department put a gag order on the informant?

Finally, why won’t Attorney General Jeff Sessions—the person with the visibility and responsibility to answer these questions—do his job?

On July 27, 2017, twenty House Republican members of the Judiciary Committee sent a letter to the Attorney General calling for a Special Counsel to get answers to the above questions.

On September 28, 2017, five House Republican members of the Judiciary committee met with the Attorney General and Justice Department staff to inquire about the July letter.

It’s time for Jeff Sessions to name a Special Counsel and get answers for the American people. If not, he should step down.