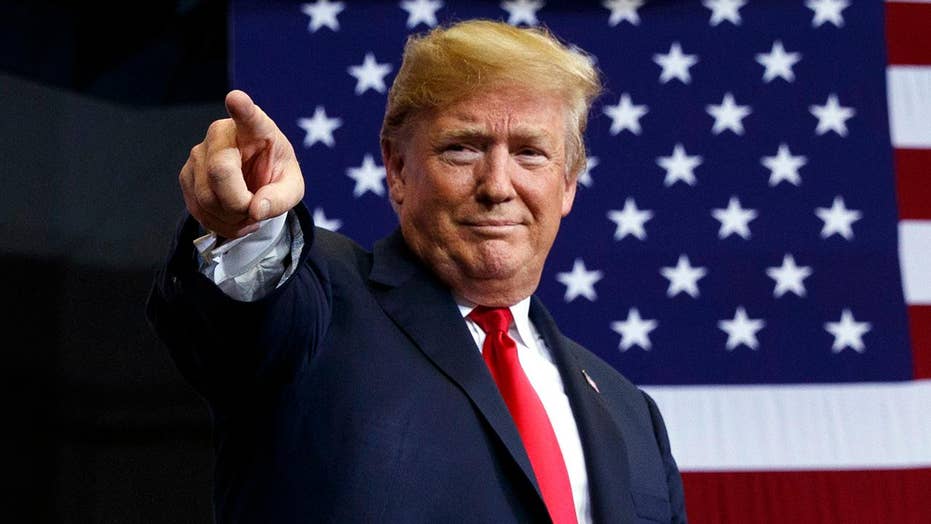 Trump on Kennedy replacement: We have to pick a great one

The president discusses Justice Kennedy's retirement and the process of finding a replacement during a rally in Fargo, North Dakota.

In the wake of Supreme Court Justice Anthony Kennedy's retirement, announced Wednesday, three big questions loom: Who will President Trump nominate to replace Kennedy? Will the Senate confirm the nominee? How will the confirmation fight affect the November midterm elections?

Much is at stake because everyone on President Trump’s longstanding list of potential Supreme Court nominees would likely be a more conservative justice than Kennedy – that is, more inclined to take an originalist or textualist approach to interpreting the Constitution.

The new justice the president appoints could help create the first genuine conservative majority on the Supreme Court since the 1930s, with huge consequences for abortion, LGBT rights, voting rights, religious liberty, racial preferences, the death penalty and other issues.

Yet no one should take such a shift to the right in the Supreme Court for granted. For more than 60 years, Republican Supreme Court appointees have often disappointed conservatives once they joined the court. Kennedy, Justice David Souter and – to a lesser extent – Chief Justice John Roberts are the most recent examples.

President Trump will need a surgeon's precision in selecting a nominee. GOP presidents understandably seek to pick someone who has not made the sort of controversial decisions or remarks that Democrats typically use to try to block confirmation. However, this approach carries the risk of selecting a nominee who may be overly cautious or too politically correct and will thus wind up disappointing conservatives.

More than a dozen years of closely observing the Supreme Court nomination and selection process has taught me that the best way to avoid such disappointment is to choose a nominee with a consistent record of following the law wherever it leads, indicating that the person will decide cases on the Supreme Court without worrying about how his or her New York Times obituary will read.

But no matter who President Trump nominates, Senate Democrats and their allies will fight the nominee with a scorched earth policy. History, the importance of Kennedy's seat, and a political atmosphere in which even rank and file Trump supporters are called Nazis or otherwise demonized tells you all you need to know.

The best that President Trump's pick can hope for is that Democrats will be unable to resist using the confirmation process to attack the president, leaving less time to go after the nominee.

With the demise of the judicial filibuster, the cooperation of Senate Democrats is no longer necessary to confirm a nominee. However, there are only 50 GOP senators after subtracting the ailing John McCain, who is battling brain cancer and absent from the Senate. Consequently, the all-Republican route requires keeping GOP senators completely unified.

That won't be easy. Republican Senators Susan Collins of Maine and Lisa Murkowski of Alaska may stray if the nominee has a strong pro-life record.

"I view Roe v. Wade as … precedent and I always look for judges who respect precedent," Collins said Wednesday, referring to the landmark 1973 Supreme Court decision that said women have a constitutional right to abortion.

Republican Senators Bob Corker of Tennessee and Jeff Flake or Arizona could be an even bigger problem when it comes to voting for the president’s Supreme Court nominee if their TDS (Trump Derangement Syndrome) flares up at the wrong time. Both senators have criticized President Trump on a variety of issues and neither is seeking re-election.

“Our Republican colleagues in the Senate should follow the rule they set in 2016 not to consider a Supreme Court nominee in an election year," Senate Minority Leader Chuck Schumer, D-N.Y., said Wednesday. Many of his Democratic colleagues agreed. Good luck, Sen. Schumer. The "rule" applies only to presidential election years and it succeeded in 2016 only because Republicans controlled the Senate.

Senate Majority Whip John Cornyn, R-Texas, sized things up correctly Wednesday when he said: “There are things (Democrats) can do to drag this out, but I think they’re fairly limited."

That's just as well because Senate Democrats won't benefit from obstructing President Trump's Supreme Court nominee. Even Democratic leaders have acknowledged that they need to expand their party's message beyond simply obstructing everything President Trump tries to do if they are to do well in November.

Moreover, it makes no sense to prolong the public focus on an issue that traditionally has worked in Republicans' favor.

Exit polls show that among voters for whom Supreme Court appointments were the most important factor in the 2016 presidential election, a decisive majority voted for Donald Trump. The issue both unifies the disparate factions of the GOP and drives its base to the voting booth.

All the more so this year, when GOP voters were wondering if their votes for a Republican Congress had really mattered, and Republican politicians were worrying about a voter enthusiasm gap.

In contrast, Democrats gain little from the passion of a confirmation battle. Their Trump-hating base is already mobilized to oppose President Trump for a long list of reasons. A Supreme Court vacancy won't make much difference.

Moreover, a confirmation battle puts Democratic senators in red states – especially those facing elections this year – in a difficult position. Voting for President Trump's nominee makes political sense in states that voted for him overwhelmingly – but a “yes” vote would make the Democratic base extraordinarily angry.

Expect Senate Democrats to put on a fierce show for their base this summer, while secretly heaving a sigh of relief when a nominee is confirmed in time for Democrats to avoid explaining an empty seat when the high court's next term rolls around Oct. 1. That won't erase the advantage Republicans gain from this vacancy, but it can limit the damage.

You can't blame Democrats for being upset about Justice Kennedy's retirement. It will not only cost them the decisive vote on some of the most important social issues decided by the Supreme Court, but it will likely also cost them any real chance of capturing the House or Senate in November.

Curt Levey is president of the Committee for Justice, a nonprofit organization that advocates for the rule of law. Before attending law school, he worked as a scientist in the field of artificial intelligence.
ADVERTISEMENT