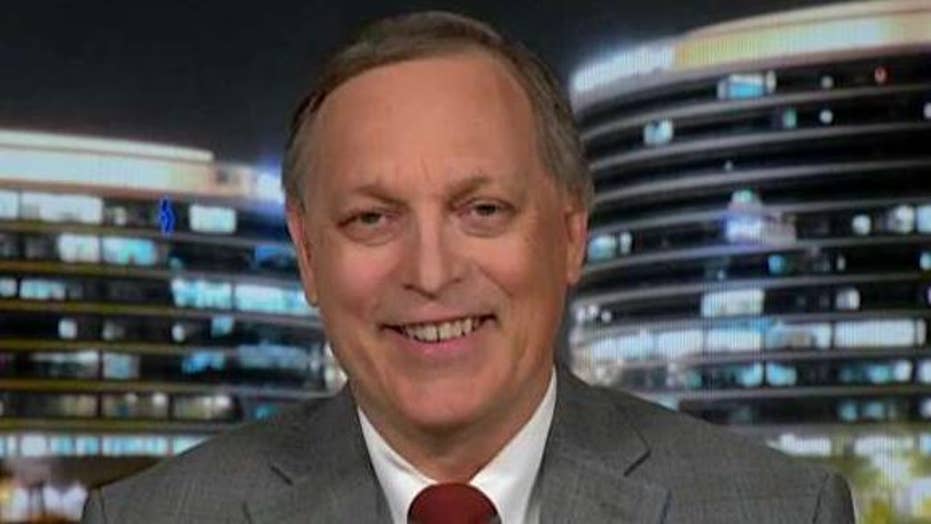 Rep. Andy Biggs on what it will take to end the partial government shutdown: Schumer has to 'bite the bullet' and fund the wall.

Every American watching the partial government shutdown understands that this is about more than the shutdown.

We have a crisis of illegal immigration on our southern border that includes drug and human smuggling, violence and humanitarian concerns, and environmental wreckage that occurs as hundreds of thousands – in some years, millions – of illegal border crossers discard their garbage into the once pristine deserts and mountains of border states.

President Trump promised Americans who voted for him a “big, beautiful wall” to help fix the disaster. Democratic leaders in Congress have vowed not to spend a penny on it. So without Senate Democrats, the 60-vote rule in the Senate will prevent legislation that would fund the border wall even partially (as $5 billion would only be a down payment) from getting to the president’s desk for consideration.

CLICK HERE TO READ REP. ANDY BIGGS: CONGRESS SHOULD PASS $25 BILLION FOR A BORDER WALL AND SECURITY NEXT WEEK

The vast majority of Republicans are committed to building a border wall. Independents and Democrats who crossed over to vote for Donald Trump did so in large measure because of his promise to build the wall and enforce immigration laws.

And many Democrats in Congress who were once on board with a wall now refuse to give the president and his supporters a “win.”

As I visit the border and talk to Border Patrol Agents, as well as ranchers and farmers who live there, they all consistently tell me that we need a border wall. For agents, it will help them focus limited personnel and resources by effectively directing illegal border crossers to specific places, thus making CBP agents better able to stop a greater number of illegal entrants. There are between three and four (and some estimate even higher numbers) successful illegal entries for every illegal immigrant who is detained by agents.

The problem of catch and release continues. So many illegal immigrants are pouring into America that we do not have enough facilities and infrastructure to process and detain them until they get a court hearing. Consequently, ICE is releasing thousands of sparsely-vetted illegal immigrants into America – thousands in El Paso in the past week alone, and over 4,000 in the Phoenix metro area since October 1, 2018.

Democrat leaders need to be more focused on giving a policy and security victory to the America people than being worried that President Trump will get a political win.

We permitted 1.2 million legal immigrants into the United States in 2018. By simple math, we know that there were even more who came into the country illegally. That puts the total number of legal and illegal entrants last year north of 2.5 million people. That would constitute the fourth largest city in the country, according to 2017 census reports.

Democrat leaders Nancy Pelosi and Chuck Schumer refuse to fund a border wall. They belittle the president’s commitment to keeping a campaign promise, which shows just how novel it is for an elected official to actually try to keep campaign commitments. Without their approval, Democrats will not cross over in the Senate to help cobble 60 votes for a government funding bill that includes money for a border wall.

I encourage the president to stand firm on this issue. He has already compromised by reducing his ask from full funding of the wall—about $25 billion – to $5 billion.

Because our national security is at stake – we are interdicting known terrorists regularly, and watching unvetted immigrants being released into the country at high rates – Republican Senate Leader Mitch McConnell needs to garner support to change the 60-vote rule.

In the meantime, Republicans should make sure that essential personnel, such as CBP agents and ICE agents, who are actually working, get paid during the partial government shutdown.

Democrat leaders need to be more focused on giving a policy and security victory to the America people than being worried that President Trump will get a political win. The stakes are simply too high.