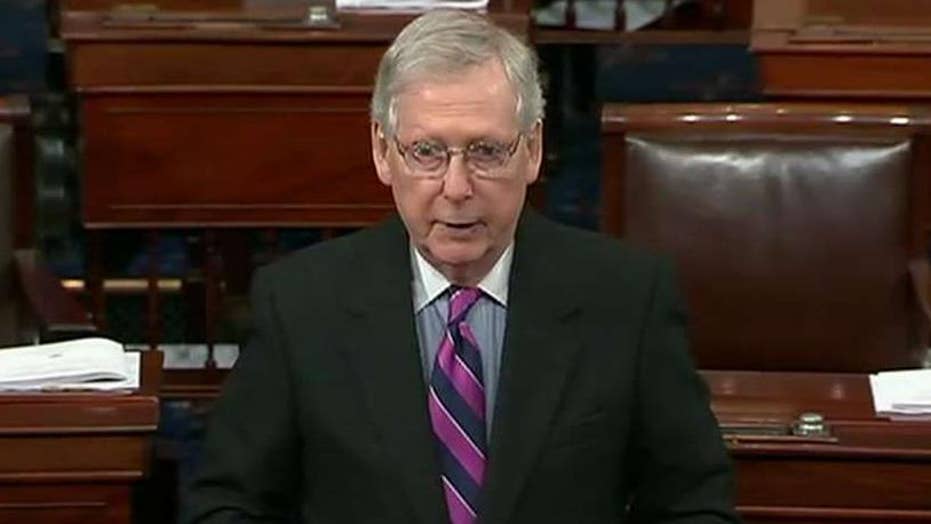 Party leaders considering plans to pay for a border wall and avert a government shutdown; Mike Emanuel reports from Capitol Hill on the negotiations.

I recently spoke to a Democrat friend and asked him whether he thought we could reach an agreement to fund a border wall. He assured me that Democrats will never support funding and building a border wall.

I’m not sure that he is representative of all the Democrats in Congress, but he represents the chasm between Republicans and Democrats on this issue. During President Trump’s meeting with Senate Minority Leader Chuck Schumer and House Speaker Designate Nancy Pelosi in the Oval Office this week about border security, the Democrats pushed back against any significant wall funding.

At least Nancy Pelosi is consistent in her ardent opposition to the border wall. Many other Democrats – including Senator Schumer, then-Senator Barack Obama, and then-Senator Hillary Clinton – once voted to authorize hundreds of miles of border fencing. Many Democrats have changed their position on a wall simply because they do not want President Trump to have a political victory. They are putting politics above public safety.

It isn’t rocket science, it’s a matter of integrity – of simply doing what we said we would. However, if a clean bill is not brought forward, the president should veto the year-end spending bill that funds approximately 20 percent of the government. Congress will have to accept responsibility for funding the wall, even if it means the partial shutdown of our bloated federal bureaucracy.

Failure to enforce our laws has created an environment wherein people from outside of America now believe they do not have to follow U.S. immigration laws. Our Border Patrol and Immigration and Customs Enforcement (ICE) agents are overwhelmed as the seemingly numberless migrants continue coming to our border.

If you want to count the cost of our failure to secure our southern border, ask Steve Ronnebeck, MaryAnn Mendoza, or any of the angel families who have suffered the violent loss of a loved one at the hands of an illegal immigrant.

The run on our border often culminates with a claim of asylum. The individual is usually released with a bus ticket to somewhere in the United States and a piece of paper indicating a date that he or she is supposed to return for a hearing to prove the asylum claim. Many don't appear at their hearing and of those that do, most fail to prove their asylum claim. We have caught them, and we have released them into the country, thus “catch-and-release.”

President Trump has fought for border security funding during his two years in office. I introduced a bill that would fund the wall. My colleagues in the House Freedom Caucus continue to press for wall funding and changes to the amnesty laws.

Democratic leader Steny Hoyer has already promised an early vote on amnesty when the Democrats take over the House in January. Border Patrol agents and those who live along the border understand that there is a surge of illegal crossings whenever Congress even talks about amnesty.

Congress must act within the next two weeks to fund the border wall and require all persons claiming asylum status to wait in their country, or in the nearest safe country, for their claim to be adjudicated. Allowing asylum claimants into the country and releasing them into the U.S. is just another incentive for masses of people to enter the country and stay here illegally.

Congress must pass $25 billion of border security funding and revise our amnesty laws. It’s the right thing to do – even if we have to stay through Christmas Day to get it done.