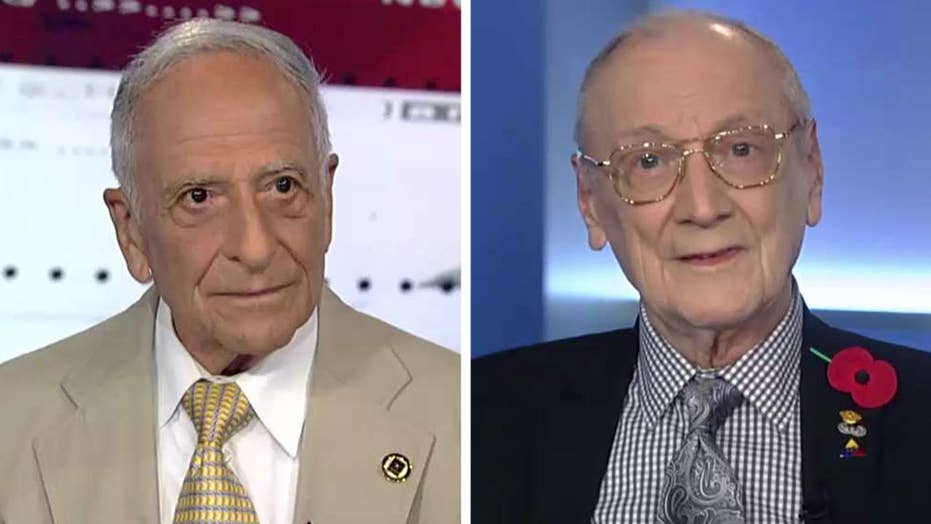 World War II veterans Harry Miller and Jewish refugee from Nazi Germany Colonel Frank Cohn reflect on the lessons they learned during their time in the service.

“Our victory is only half over,” President Harry Truman cautioned on Victory in Europe Day –the long-awaited VE Day

Today we are fighting a very different global war – this time against a microscopic killer virus. And unlike in World War II, we are fighting not just in foreign lands but on American soil.

The soldiers in today’s war are the heroic health care workers risking their lives to treat the sick, the medical researchers seeking a vaccine and treatments, and the millions of people out of work as they stay home to avoid spreading the coronavirus.

British girls, of the Picture Division of the London Office of War Information, dance in the street with American soldiers during the V-E Day celebrations in London, May 8, 1945. (Photo by Photo12/UIG/Getty Images)

Our struggle with the coronavirus is giving us a taste of the uncertainty the World War II generation lived with for years. We can imagine how good it felt when church bells rang out in London signaling the end of the war in Europe.

“The unconditional surrender of our enemies was the signal for the greatest outburst of joy in the history of mankind,” wrote British Prime Minister Winston Churchill.

No doubt there will be great joy around the world with COVID-19 – the disease caused by the coronavirus – will be defeated with the power of modern medical science.

For America, VE Day was a turning point. Adolf Hitler’s Nazi darkness was defeated, but fear of Soviet dictator Josef Stalin’s Red Army was driving the world to look to America for help over an even longer period. In that spring of 1945, America took on the role of the world’s military superpower.

For many near the battle lines in Germany, the big global political shift was very personal. America’s advancing Army was a beacon. Refugees fled to the American lines to avoid capture by the Soviets.

Teenage Auschwitz survivor Samuel Pizar saw the white star on an American tank from his hideout in a barn in southern Germany.

“God bless America, God bless America,” Pizar shouted as he ran toward the tank. U.S. Army Cpl. Bill Ellington lifted Pizar “through the hatch and into the warm embrace of freedom” as described by President Bill Clinton on the 50th Anniversary of VE Day in 1995.

German rocket expert Werner von Braun was one of the scientists hiding in the woods who surrendered. Von Braun turned himself in to Pfc. Fred Schneikert from Sheboygan, Wis., giving America the Cold War advantage in missiles and rockets that would send satellites and humans into space.

Already crossing the lines were 375 rare white Lipizzaner horses hidden at a farm in Czechoslovakia. In Hungary the Red Army had already shot 18 Lipizzaner stallions.

U.S. Army Col. Hank Reed and Capt. Tom Stewart plunged 35 miles across the border to bring out stallions, broodmares and foals with help from allied POWs, surrendered German soldiers and a few Russian Cossacks at the farm.

“We thought we had a chance to save a sliver of culture,” recalled Louis Holz, one of the American soldiers. “People ask me all the time why I did it, and after all these years I still don't know,” Stewart told Sports Illustrated in 1995.

Wolf Schneider, 20, was raised to be a Nazi and was horrified when his homeland of Germany lost the war. Six months later he was translating for the U.S. Army.

“Working for the Americans I had the wits to realize what good people they were and how well they treated us,” Schneider told Britain’s The Guardian in 2015. “Just the fact that we were well-fed was a big deal.”

Victory in Europe left America as the strongest protector of the gains won in World War II.

Delegates were already meeting in San Francisco to form the United Nations. America’s military strength and commitment were essential to hold the fledgling coalition together.

“I scarcely need tell you that beneath these triumphs lie poisonous politics and deadly international rivalries,” Churchill wrote to his wife Clementine, who was actually in Moscow with the Red Cross on VE Day.

As it turned out, the world didn’t get much of a break, as the Cold War soon began and lasted until the fall of the Berlin Wall in 1989.

America’s power has been used with great benevolence for the past 75 years. Sadly, this 75th VE Day finds some doubting U.S. leadership.

Historian Rick Atkinson wrote in The Wall Street Journal May 2 that he sees the postwar order “sputtering” as the “current pandemic has exposed grave shortcomings in American leadership” alongside deep fissures with allies and a “decline in American willingness to lead with aspirational, albeit imperfect, moral authority.”

America is still carrying the mantle of leadership that settled on our shoulders in 1945. NATO is stronger than ever with 29 members. On this 75th anniversary of VE Day, America’s military is on guard far from our own shores, and still leading allies from the Persian Gulf to the Pacific.

The same qualities that drew many to see America’s Army as a line of salvation before most of us now alive were born still shine through today.

Of course, a big task looms. As with 1945, the coronavirus crisis marks a turning point in world affairs. Now the U.S. must lead with allies and confront, contain and curtail China before we risk the world won in 1945.

Churchill in 1945 wanted to ensure the United Nations “does not become an idle name.” You wish Churchill was here to give the U.N.’s World Health Organization a kick in the pants and a stiff dose of reform.

Americans have not forgotten or given up. Like Capt. Stewart rescuing the Lipizzaner horses, we may not always fully understand why we take the risks of leadership around the world, but we do. On VE Day we remember and honor sacrifice, commitment – and above all, hope.